THE HUMANITARIAN APPROACH AND ACKNOWLEDGMENT OF THE IDENTITY OF THE ROHINGYA SHOULD NOT BE SEPARABLE
Commentary No : 2017 / 90
AVİM
06.12.2017
4 min read 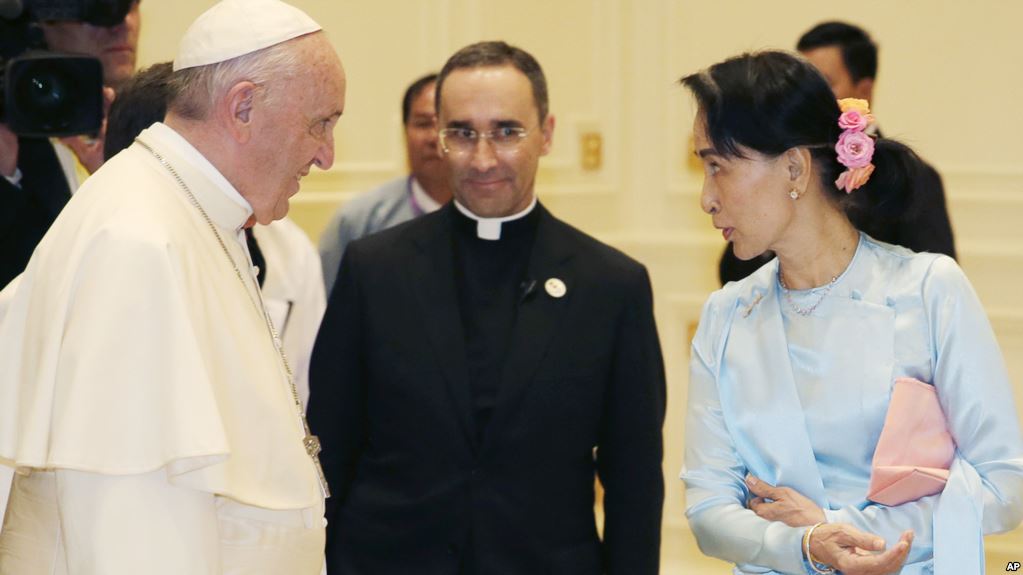 Pope Francis made an Apostolic visit to Myanmar and to Bangladesh from 27 November to 2 December 2017. According to the declaration made by Greg Burke, Director of the Holy See Press Office the visits are made upon the invitations by the respective heads of state and bishops of the two countries. He visited the cities of Yangon and Nay Pyi Taw in Myanmar and Dhaka in Bangladash. [1]

It is very interesting to note that in each of his visits, the Vatican designs a logo for Pope Francis. For the Myanmar trip the Vatican has designed an interesting logo. The trip Logo clearly has the motto engraved “Love & Peace”.

According to Vatican the Logo states the following:

“The logo for his visit to Myanmar depicts Pope Francis releasing a white dove from within a heart drawn in the colors of Myanmar’s flag: yellow, green, and red. An outline of Myanmar’s landmass sits beside the Pope within the heart, while the motto for his journey is shown above: “Love & Peace”.”[2]

Despite this peace message in the logo of his trip to Myanmar neither before his trip nor during the trip has Pope Franscis made mention of the Rohingya Muslims except his pronunciation. of the word Rohingya during his visit to Bangladeshi capital of Dhaka. Here we must look at several indicators as to why Pope Francis might have made this crucial omission. One of these indicators is an interview given by the editor-in-chief of the Asia News service press agency of the Roman Catholic Pontifical Institute for Foreign Missions.[3]

Many individuals and organizations in the World point to the fact that Pope Francis has missed an important opportunity in Myanmar, especially during his meeting with Prime Minister Aung San Suu Kyi, when he did not mention the Rohingya Muslims.

Among them, is Phil Robertson, the deputy director of Human Rights Watch’s Asia division. He said it quite well when he argued the following: “Rohingya have been stripped of so many things but their name should never be one of them”.[5]

Some however like the EU’s Ambassador to Myanmar Kristian Schmidt have defended the speech of Pope Francis. She argued that it was unnecessary for Pope Francis to talk directly about the crisis. She stated “He didn’t need to. It was written all over the speech, between the lines … It doesn’t have to be about specific words. It was all about values. And on values it was absolutely eloquent and strong.”

We wonder if the Pope or the EU Ambassador would have taken the same position if the persecuted minority would have been Christian? If the burned villages would have belonged to Christian groups.Whether speaking between the lines would have been enough? Even western journalists now accept that Pope Francis and Vatican feared the Buddhist majority actions towards Christian minority and thus decided not to mention the name of Rohingya Muslims.[6]

Everybody expected him to come to the aid of Rohingya Muslims at the Bangladesh leg of his trip. Some say he came closer at the second leg of his trip to saying “Rohingya”. Yet saying “refugees from Rakhine State” is not the same thing as Rohingya's. He did praise Bangladesh for helping the nameless refugees from the Rakhine state.

Most probably because of the severe criticisms, at the very end of his Asia tour, he felt obliged to refer to Rohingya people at least once by their name. He also pronounced their name on the way back to Rome on the plane. The Pope is considered only accountable for his actions before the God. It seems that when the plight of Muslim people is of the subject matter his diplomatic and political identity very easily overrides religious one. In fact, in his Asia visit he missed a chance to stand against injustice which many countries are turning a blind eye because of commercial interests or because of the strategic importance of Myanmar.  It would have been meaningful and most welcome for the apostolic visit to pay more attention to all aspects of the sufferings of these helpless people.

[6] Joanna Moorhead, “By Not Saying ‘Rohingya’, Pope Francis Was Just Protecting His Own,” Guardian, November 28, 2017, https://www.theguardian.com/commentisfree/2017/nov/28/pope-francis-catholics-rohingya.