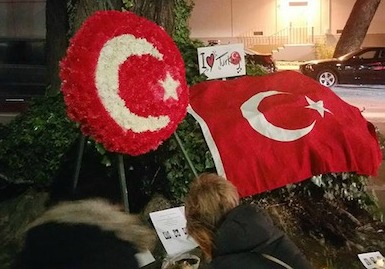 As it is known, the Armenian American terrorist Hampig (Harry) Sassounian, who, on 28 January 1982, assassinated the Consul-General of Turkey in Los Angeles, Kemal Arıkan, was granted provisional parole by the California Parole Board on December 14, 2016. In order for this shameful decision to take effect, the approval of the Governor of California was required. Ultimately, Governor Jerry Brown recently reversed the decision of the California Parole Board and denied the parole of the terrorist Hampig Sassounian, meaning that Sassounian will continue to serve a life sentence for his assassination of Consul-General Kemal Arıkan.

Governor Jerry Brown should be commended for his courageous decision, especially considering the influence of Armenians in California.[1] Thanks to Governor Brown’s decision, a grave mistake that could have casted a shadow to Turkish-American relations and harm spirit of the fight against terrorism was corrected at the last moment.

However, the Turkish American community and associations should also be commended for their collective efforts and success in their campaign against Sassounian’s parole. Despite the counter-efforts of militant Armenian circles, the Turkish American community, by preventing the obstruction of justice, have risen to the occasion and proved their potential as a community that can come together and take action against anything that violates their interests and sensitivities.

Nevertheless, it is still deplorable how things even got this far to the point of releasing a terrorist who was sentenced for life imprisonment for committing a heinous assassination against a Turkish diplomat.

Hampig Sassounian assassinated Kemal Arıkan simply because he was a Turkish national. He committed this crime as a member of the terrorist organization JCAG-ARA (Justice Commandos for the Armenian Genocide-Armenian Revolutionary Army), which, together with ASALA (Armenian Secret Army for the Liberation of Armenia), led a terror campaign that targeted Turkish diplomats and other officials in the 1970s and 1980s. Sassounian is nothing short of a coldblooded terrorist who has shown no remorse for his crime and is known to still embrace the ideologies that led to his assassination of Arıkan. In fact, it was for his extreme ideologies that Sassounian’s previous parole requests were rejected in 2006, 2010, 2013 and 2015 by the California Parole Board.

Yet, it is not possible to understand why the California Parole Board all of a sudden decided to grant parole to this terrorist. In fact, the Board’s decision is a very shady one. It is quite obvious that certain Armenian circles tried to influence the Parole Board for the release of Sassounian. However, it should be emphasized that efforts for the parole of Sassounian equate to the promotion of terrorism. US authorities would be well advised to investigate and reveal any shady dealings between the Board members and relevant Armenian circles. US authorities would be well advised to also reveal and take necessary action against those who promoted terrorism via their efforts for the release of Sassounian.

Although the Governor’s decision is a very positive development, the above-mentioned concerns must be addressed by relevant authorities due to the known presence of Armenian militants who still embrace dangerous ideologies that oppose anything Turkish or related to Turkey.