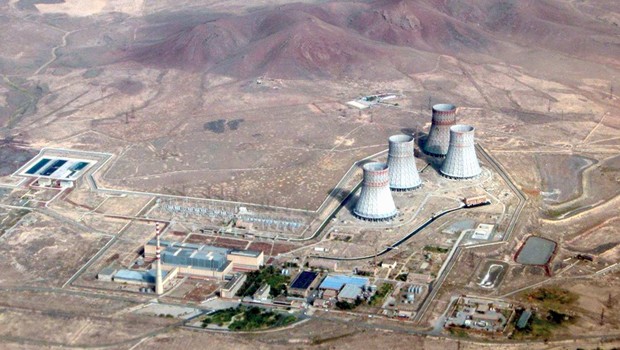 The Metsamor power plant was built in Armenia by the Soviet Union government in 1977. It is located 30 km away from Yerevan and 16 km away from the Turkey-Armenia border. According to the resources the power plant meets approximately 40% of Armenia’s total energy need. Armenian officials and experts therefore stated that in order to avoid any energy shortages, the power plant must continue to operate despite all the warnings and suggestions made by European Commission and international community. At the same time however, the power plant threatens regional security, including the eastern part of Turkey where agriculture and animal breeding are important sources of income for the inhabitants. [1]

Metsmor stands on a very fragile base. The earthquake that occurred in 1988, which resulted in the death of 25,000 people and left half-million people on the streets without a home, points out the danger of the location of this old plant. As was declared by officials, the Metsamor remained standing during this unfortunate event with “no serious damage”.  However, the fact that Metsamor stands on a fault line still remains as a serious concern and still poses a danger for the entire region.[2] The Minister of Energy of the Republic of Turkey, Taner Yıldız, also warned the international community about the danger knocking on the door in the region. He stated that this nuclear plant expired 30 years ago and that now it threatens both Armenia and Turkey.[3]

European Commission is also concerned about the safety of the Metsamor nuclear plant. The 2014 progress report on the Implementation of the European Neighbourhood Policy in Armenia was published in March 2015 and it urges Armenia to take actions about Metsamor; “The early closure and decommissioning of the MNPP (Mezdamor Nuclear Power Plant) remains a key objective for the EU and under the ENP Action Plan. Since the power plant cannot be upgraded to meet current internationally recognised nuclear safety standards, it should be closed as soon as possible. The new power plant should comply with the latest international safety standards.”[4] The report also states that the Armenian government presented a stress report on Metsamor aftermath its decision to keep Metsamor operating until 2026 in cooperation with Russia via inter-governmental agreements. Additionally, under the section which contains recommendations for Armenia to implement in 2015, EC states that; “(…) further intensifying efforts to implement international conventions, such as those linked to the EU Generalised Scheme of Preferences (GSP); working towards the earliest possible closure of the Medzamor nuclear power plant and adopting a detailed decommissioning plan, taking into account the results of stress tests; meanwhile increasing the safety standards of the nuclear power plant;”.[5] Armenian government’s decision to keep it operating until 2026 ignores the high security risk of Metsamor, which might have horrible results and will have long term affects. Metsamor is a potential threat to Armenia and neighboring countries. Any catastrophe related to this risky nuclear power plant will possibly destroy the lives of people in the entire region.

The President of Azerbaijan, H.E. İlham Aliyev in his speech he made at the Nuclear Security Summit held in Washington on 31st of March – 1st of April, drew attention of international community to Metsamor NPP, which was built in 1976 based on technologies of “Chernobyl” NPP, and one more time called on to take measures against the threat emanating from this facility.[6]

The nuclear-related threat originated from Armenia is not limited to Matsamor case. According to news and reports mostly Armenian citizens are smuggling uranium materials from Armenia to other regions. Because of the lack of control over uranium resources, which is a direct threat not only towards South Caucasus but also other neighboring regions, many smuggling cases in the wider region are being observed almost in the last two decade.

For instance, a report published on Trend News Agency by Aygun Badalova, which is based on compilation of the reports published on various resources reported about the same issue, revel the level of danger posed by the illegal acts.

According to Trend News Agency’s report and the web page of the Perspectives on Terrorism: Two Armenians and a buyer were arrested by Ukrainian officials in Berehovo while Armenians were trying to sell 20 kg of Low-Enriched Uranium (LEU) U-235 in 1999. According to a source “the material was enriched Uranium in white powder form stolen from a radioactive-materials recycling facility in Krasnoyarsk. Other sources said it was LEU metal suitable for making fuel for RBMK reactors”.[7]

According to the U.S. Government Accountability Office reports “…in 2000, three persons were arrested at Tbilisi airport, one of them was from Armenia, for attempting to sell mixed powder containing about 0.0004 kilograms of plutonium and 0.0008 kilograms of low enriched uranium, as well as a 0.002 kilogram sample of natural uranium. The report states that, the individuals said they had brought the uranium and plutonium from Russia and Ukraine to sell it”.[8]

According to news published on New York Times: in 2003, an Armenian named Garik Dadayan, was arrested at Sadakhlo cross-road village among Georgia, Armenia and Azerbaijan. News state that “…Firstly Dadayan described himself as a businessman, he was caught carrying a tea box that held 170 grams, about seven ounces, of highly enriched uranium” and he stated that the uranium had come from Novosibirsk according to the Georgian officials, in where a Russian nuclear complex that processes vast quantities of highly enriched uranium located. He was sent back to Armenia to be handed over to the Armenian government. He was sentenced to two and a half years in prison after a trial.[9]

According to the report published on Trend News Agency in 2009 a vehicle belonged to a resident of Noratus village of Gegharkunik region in Armenia and that was carrying three Armenian citizens entered Georgia from Armenia set off a gamma alarm on the radiation detection portal monitor at the Armenia-Georgia border Sadakhlo-Bagratashen checkpoint. The report states that the driver provided a cursory explanation for the alarm, and at this time the patrol police did not detain anyone. The news state that again, on August 27, the same car returned to Armenia through the same checkpoint, and set off a gamma alarm. “The patrol police stopped and searched the vehicle and the Georgian officials found out that the car was contaminated with Cesium-137”. Although, the search did not produce any radioactive material and the occupants were released and returned to Armenia.[10]