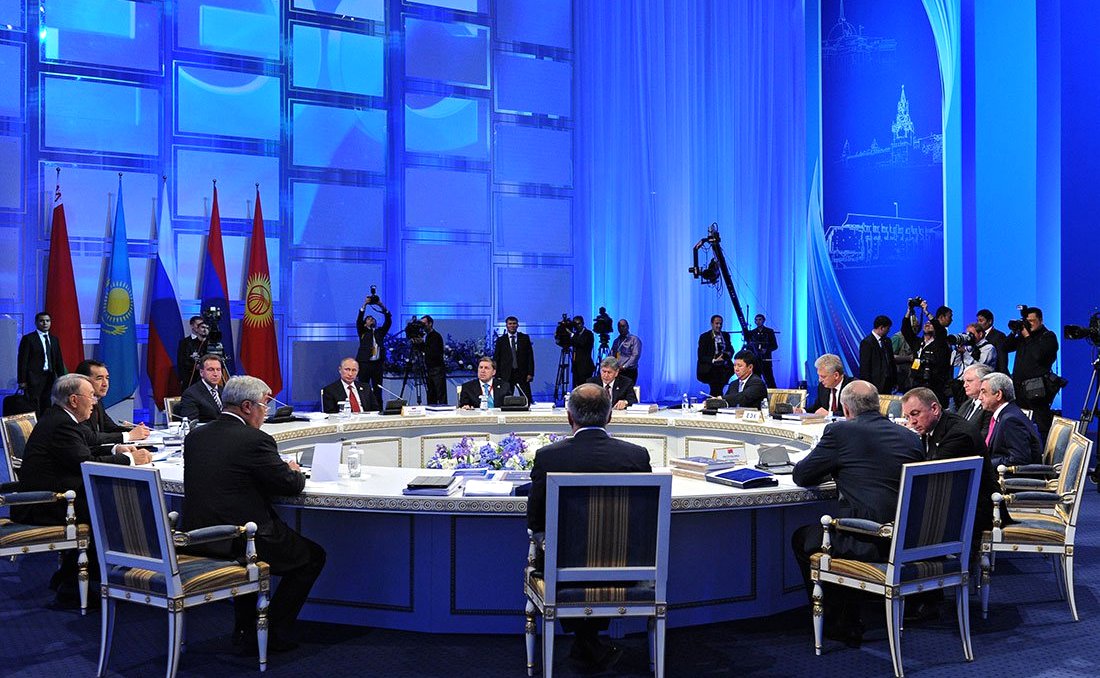 On 1st of January 2017, Eurasian Economic Union (EEU) marked its birthday. Currently EEU has five members; Russia, Kazakhstan, Armenia, Belarus and Kyrgyzstan. But already Iran and China openly stated their interest in strengthening relations with the organization and Tajikistan is considering joining the EEU. This year Kyrgyzstan will assume the chairmanship.

There have been many criticisms towards the motivations behind the establishment of the EEU. Some argue that it is an instrument of Russia to increase its presence in the region and the dependency of member countries on Russia, whereas for member countries it was an inevitable choice considering their relations, particularly economic ties, with Russia. On one hand, some experts are hopeful and optimistic about the current situation and the future of the EEU. On the other hand, decrease in oil prices, sanctions implemented on Russia, current global economic crisis and high dependence of other member countries on Russia are not helping EEU to be more efficient. Also, member countries, except Kazakhstan and Kyrgyzstan, do not share borders and trade volumes among EEU member countries are significant only if we consider their relations with Russia separately. For instance, in 2014 trade volume between Kazakhstan and Belarus was around 1 million US Dollars[1] whereas trade volume between Kazakhstan and Russia was over 10 billion US Dollars. But EEU membership still has an attractive side. However, time to time Kyrgyzstan is losing its optimism and starting to question the outcomes of its membership even though it has been seen as the best option to minimize the impact of global economic crisis over the country. For example, according to the news, one year ago Deputy Prime Minister of Kyrgyzstan Oleg Pankratov said “(t)he effect of Kyrgyzstan’s accession to the EEU turned out to be blurry.”[2] But he also stated that if the country did not join the EEU, effects of the global economic crisis would have been much more significant.[3]

For relatively small countries such as Kyrgyzstan, the EEU can offer advantages, such as access to EEU market which can provide increasing employment opportunities due to an integration of economies. Yet, member countries are still facing challenges arising from customs union; it requires harmonization of cross-border trade, production standards etc. For instance, a recent report by the Crisis Group pointed out that Kyrgyzstan lacks necessary infrastructure for veterinary services and laboratories.[4] Moreover, Kazakhstan has banned the transit of Kyrgyz meat and dairy products via its territory starting from 1st of January.[5] Thus, EEU countries will need further cooperation to improve market harmonization. Kazakhstan took a step towards this direction and decided to provide the first 7.5 million US Dollars of the 100 Million US Dollars - in total - to Kyrgyzstan to be used for improvement of the customs infrastructure of Kyrgyzstan.[6]

Further integration with EEU will have positive outcomes on the labor market as well, particularly on the migrant labors and their contribution in the economy of their homelands. The share of the remittances is around %28 of the total GDP[7] 6.5 billion US Dollars[8]. Some scholars believe that Kyrgyz labor migrants in Russia and Kazakhstan will benefit from the integration since EEU regulations foresee bringing common standards and will improve the legal status of the labors.[9] Each year, around 500.000 Kyrgyz labors are going to Kazakhstan and Russia to work.[10] Consequently, an integrated economy will give the opportunity to improve their situation and working conditions as well.

Kyrgyzstan’s membership to EEU was an inevitable outcome of its geographic position and relations with Russia. Being isolated from a regional organization would not be in Kyrgyzstan’s benefit. According to Crisis International report, Kyrgyz officials stated that the membership to the EEU was the only option: “We had to join the EEU…or...the Kazakh borders would be closed”.[11] In 2015, total trade volume of Kyrgzstan with China was EUR 4,294 Million which equals to %48.2 of the country’s total trade. Russia is on the second row with %15.1 share (EUR 1,346 Million) and Kazakhstan is on the third row with %11,6 share (EUR 1,037 Million).[12] Kyrgyzstan’s total trade with the EEU decreased by 18.6% in the first half of 2016.[13] Considering the abovementioned stats, volume of trade and the relations with China, we can observe that Kyrgyzstan has concerns over its relations with China in case of a further economic integration within EEU such as harmonization of customs and regulation in the internal markets. China is Kyrgyzstan’s top trading partner and besides bilateral trade China’s investments in Kyrgyzstan have an important contribution in Kyrgyztsan’s economy. At the 12th session of Kyrgyz-Chinese intergovernmental commission for trade and economic cooperation, Vice Minister of Commerce of PRC Fang Aiqing stated that during the 8 months of 2016 Chinese investments to Kyrgyzstan increased %57.7 comparing to the same period of 2015 and reached to $128 million.[14] In addition, presently China Southern Airlines declared its interest to buy 49 percent share of Air Kyrgyzstan.[15] There is a concern that Kyrgyzstan’s relations with China will be effected by the country’s decision to further integrate in custom and tariff regulations of EEU, because consequently integration with EEU requires to implement higher tariffs on non-EEU goods and services. Therefore, Kyrgyzstan is a little bit hesitant to move forward and deepen commitments with EEU.

In that sense, Kyrgyzstan was hesitant at the summit held in St. Petersburg. At the summit, all member countries except Kyrgyzstan – and Belarus, since the President Lukashenko did not attend to the meeting – signed the Customs Code which is a big step towards further integration of the markets. Chairman of board of the Eurasian Economic Commission stated that Kyrgyzstan approved the code however “did not sign the statement”. He further explained saying “This is due to the fact that our Kyrgyz colleagues propose to clarify the wording on the priority of removal of barriers on the internal markets. The rest of the documents were signed by all the presidents..”.[16] Eventually the agreement was signed, but before the ratification process Kyrgyz MPs expresses their concerns by saying that the Customs Code should be carefully studied. For example MP Mirlan Bakirov said: "Before ratifying the EEU Customs Code, it is necessary to carefully study it," and he added “Kyrgyzstan 80 percent depends on imports. What is the impact of the Code on businessmen, working with China and Turkey? Prior to ratification, we must study each item of the code. It's necessary to hand out its signed version. We shouldn't adopt the documents so fast".[17] However Moscow and Beijing are in close touch to find out the ways to strengthen relations both on bilateral and regional levels. Earlier, President Putin stated that the relations between EEU and some countries such as Israel, India, Iran, Singapore and Egypt are expected to develop within the framework of EEU’s external relations. China, and China-led Shanghai Cooperation Organization, is highly interested in Central Asia since China-led One Belt, One Road (OBOR) initiative also includes Central Asia. The land transportation routes pass through Central Asian countries. Two of the Central Asian countries are already EEU members and Russia is an important power in the region. Back in 2015, President Putin and President Jinping met and signed deals on energy, trade and finance. President Putin said: “The integration of the Eurasian Economic Union and Silk Road projects means reaching a new level of partnership and actually implies a common economic space on the continent," after the meeting with President Jinping.[18] Also in October this year, President Jinping and President Putin met again in Goa, and they discussed regional issues, BRICS and Eurasia Economic Union. In the text published by the Chinese Ministry of Foreign Affairs there is a part reflecting both leaders’ positions: Russia supports the alignment and cooperation between the Eurasian Economic Union and the initiative of Silk Road Economic Belt[19].

Integration of EEU and OBOR will put increase the role of Central Asian countries and partially ease the tension and concerns in Kyrgyzstan. Kyrgyzstan earns a lot from re-exportation of Chinese products and the country has good ties with China. However, the long term benefits and potentials of EEU-like initiatives and institutions will be actualized only if all countries take each other as equal and sovereign partners. Any other agenda will backfire and have a negative influence over the regional stability.