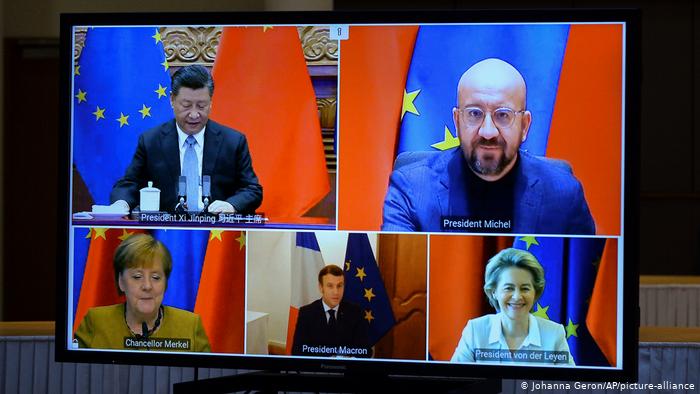 The European Union (EU) and China have reached a consensus on the terms of their investment agreement after being in negotiations since 2014.[1] The investment agreement negotiations between the parties were concluded at the EU-China Leaders Meeting held with the participation of the President of the EU Commission Ursula von der Leyen, the President of the EU Council Charles Michel, the German Chancellor Angela Merkel, the President of France Emmanuel Macron, and the Chinese President Xi Jinping. After the meeting, Von der Leyen emphasized in her statement that they aimed at achieving a balanced trade and increasing business opportunities with this agreement.[2] In 2019, China became the EU’s second largest trading partner, and both sides traded goods worth 1 billion euros per day.[3] With this agreement, it is aimed to open several markets of China from healthcare to telecommunications to foreign investors and to further increase commercial affairs. At the end of the negotiations, China agreed to open its manufacturing industry to EU investors with some limited exceptions. This is a huge success considering that more than half of EU investments in China are concentrated in the manufacturing sector. The agreement will also give EU investors greater access to Chinese markets. The EU market is already open to investment in the service sector under the General Agreement on Trade in Services (GATS). In addition to that, referring to the sensitivity of sectors for the EU such as energy, agriculture, fisheries, and public services, the EU Commission declared that these sectors are all protected in the EU-China agreement.[4]

Although the deal was welcomed by the business community, it has also caused harsh criticisms. The focus of these criticisms is on the human rights and labor rights violations in China. In this context, the oppression and rights violations against Uyghur Turks are frequently criticized. For the agreement to come into force, it must be approved by the European Parliament and at this point, it has been signaled that China’s Uyghur policy may make this approval process difficult.[5] In response to these criticisms, Von der Leyen emphasized that “With the agreement, the EU has acquired a trump card to combat forced labor.”[6] Meanwhile, German Chancellor Angela Merkel stated that the EU-China agreement on investment is a very important step that would both protect investments more and make China more transparent.[7] In short, according to the EU, this agreement aims to globalize the values defended by the EU (clearly defined with environmental protection criteria and human and labor rights issues in mind) and to include China in this process through the economy.

There are important differences of opinion in the West regarding the business connection developed with China. Each country continues its relations with China in line with its own interests. In this period where a change of administration has taken place in the United States, the meaning of the EU-China agreement for the US is particularly important. China, which experienced various problems in its commercial relations with the US during the former Donald Trump administration, faced restrictions on 5G technology and Huawei’s activities. The agreement with the EU is particularly striking, as Beijing’s attention has now turned to the shape of relations with the new US administration of Joe Biden.[8] At a regular press conference held in the capital Beijing in January, the Spokesperson of the Chinese Ministry of Foreign Affairs stated that the bridges burned in bilateral relations during the Trump era should be rebuilt and the damaged roads should be repaired, and expressed that there is a great expectation for China and the US relations to enter into the right orbit as soon as possible with the Biden administration.[9]

While the reaction of Biden and his advisers on the deal has not yet fully taken shape, shortly before the agreement was reached, on December 22, 2020, US national security adviser Jake Sullivan shared a post on Twitter that the US administration would welcome consultations with European partners on common concerns about China’s practices.[10] However, the China-EU agreement shows that this implicit warning by the US has been ignored by the EU. After the deal on agreement, Sullivan stated in an interview that the Biden administration wants to urgently hold a meeting with European allies to establish a common agenda regarding Chinese trade practices.[11]

The EU and the US share common strategic and political goals on China. One of the most important of these is to stop China’s human rights violations. Despite this, the EU-China investment agreement may weaken the Biden administration’s efforts to get closer to the EU in the future.[12] On the other hand, the Minister of Economy and Energy of Germany stated that the EU does not consider the agreement reached with China to be a mistake, and stated that this agreement is similar to the agreement that the US has with China and that it is about creating equal conditions for all parties.[13] Therefore, the EU thinks that the agreement with China brings them closer to economic equality with the US. However, it seems that the deal will  damage both the EU’s comparative advantage over China and its transatlantic alliance with the US.

From an economic perspective, the primary winners will be large European firms in various manufacturing and service sectors such as the automobile, chemical, communications and healthcare industries, banking, and transportation. Large German and French companies, which are currently already located in China, are seen as the biggest beneficiaries. At the geopolitical level, the biggest winner is China. The agreement will save China from withdrawing from its trade war with the US. The losers of the agreement are those who have advocated for the restoration and strengthening of the US-EU transatlantic relationship and human rights and labor rights defenders.[14] The EU-China agreement on investment is of great importance in liberalization and geostrategic aspects. The global impact of the agreement are eagerly awaited.

[4] Sofia Baruzzi, “EU, China Reach Agreement on Investments in Principle: What Does it Mean for Businesses”, China Briefing, January 14, 2021, https://www.china-briefing.com/news/eu-china-reach-agreement-on-investments-in-principle-what-does-it-mean-for-businesses/