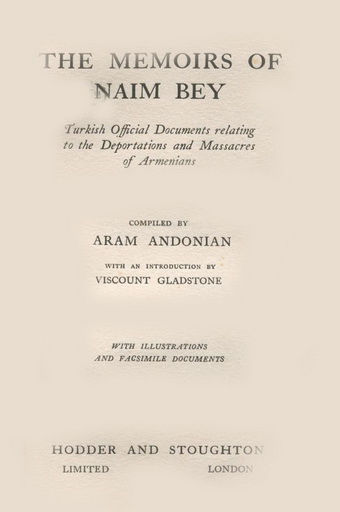 In the Foreword of his book titled “The Naim Efendi Memoirs and Talat Pasha Telegrams - Archive of Krikor Gergoryan” published by İletişim Publication in last October, Taner Akçam states that his source is the memoirs of the Ottoman official named Naim Bey alleged to have been employed in the Aleppo Resettlement Office in 1913-1916 and some of the related documents. Akçam, in the Foreword referring to the book “The Talat Pasha Telegrams - Historical Fact or Armenian Fiction”, asserts that after the publication of this book, it has been generally accepted that “the Memoirs and documents” are fake and since then the issue has been considered as the “fake telegrams of Talat Pasha”. Taner Akçam in his book mainly targets Orel’s and Yuca’s book and claims that the authors have based their arguments concerning the Memoirs of Andonian and the telegrams in the memoirs on the following three important theses:[1]

“Authors were based their claims on three important theses: 1) There was no Ottoman officer by the name Naim Efendi; 2) there cannot be a memoir by non-exist person thus there is no such memoirs; 3) the documents claimed to belong to Talat Pasha are altered fraudulently and fake. Per the authors, the Memoirs and the documents were fabricated mainly by Andonian and the Armenians.[2]

Akçam, in parallel to publishing the book, made statements about his claims to the press in the same vein, and in an interview conducted by Agos Newspaper, repeated entirely the above-mentioned quoted passage. In that context, he stressed that Orel and Yuca based their arguments on three theses and claimed that the authors defended the view that “there was no Ottoman officer by the name of Naim Bey”.

At this point, there is a need to go back to book “The Talat Pasha Telegrams - Historical Fact or Armenian Fiction” by Orel and Yuca and to examine what was expounded by the said authors on the subject matter.

In the second chapter of the above-mentioned book titled “Andonian’s Documents”, the authors seek the answer of the question of “was Naim Bey a real person?” and state the following:

Faced with the fact that Andonian’s book and letters frequently contain inconsistent and even contradictory statements about the same events, plus the fact that he frequently engaged in distortions in his description of events, together with what we shall see are numerous errors in his alleged documents, one quite naturally begins to question whether Naim Bey, the hero of his work and the alleged source of his “documents”, was an actual person.[3]

The question of whether an individual named Naim Bey was employed in the Aleppo Resettlement Office has been thoroughly investigated in the Archives of Prime Ministry in İstanbul.

In such an investigation, the first source to start with the examination should have been the Ottoman Salnames (Yearbook), periodic compilation listing the names of all officials in provinces of the Empire. However, such Salnames were not published in the chaotic years of 1912-1917 and the last Salname compiled for the Province of Aleppo was published in 1910. Thus, because of this restriction, a variety of other official registers had to be turned to, including the İrade-i Seniye Defterleri (Imperial Rescript Registers), the Ruzname-i Ceride-i Havadis (Registers of Daily Events), and the Düsturs (Law Codes), in an attempt to verify the employment of an individual named Naim Bey on the Aleppo Resettlement Office staff during the years 1915-1916. However, in this examination, the name of Naim Bey was not found.[4]

On the other hand, the names of several other individuals, said by Andonian to have been employed in Aleppo and its vicinity during the relocation of the Armenians, do appear in the archival documents.

In this situation, with the words of Orel and Yuca, there might be three possibilities regarding Naim Bey:

a) Naim Bey was a fictitious person,

b) Naim Bey is an assumed name,

Under these circumstances, it seems impossible to make a definite judgement on the question of whether Naim Bey was an actual person. The only point which can be made with certainty is that if Naim Bey actually existed, he was undoubtedly a very low ranking official. Indeed, Andonian confirms this impression in his letter of 26 July 1937 where he writes

Bearing this fact in mind it seems logical to conclude that Naim Bey could not have been in a position to have access to documents of a secret and sensitive nature.

Taking into consideration the aforementioned, it is clear then that Orel and Yuca have not said “There was no Ottoman official by the name of Naim Bey.” On the contrary, after seriously investigating whether such an officer existed, Orel and Yuca arrive at the conviction that “Under these circumstances, it seems impossible to make a definite judgement on the question of whether Naim Bey was an actual person.” Orel and Yuca also stressed that if Naim Bey existed, he was an unimportant official.[5]

Taner Akçam asserts that his book rests on the documents. In the light of the foregoing, it is academically impossible to understand how Akçam claims at the beginning of his book that Orel and Yuca in their book are suggesting “There was no Ottoman official by the name of Naim Bey.” Stating such a conclusion in an allegedly document-based book and expressing the same view publicly in the press without providing any quotation from the authors, and attributing an argument to the authors they definitely did not pronounce cannot be considered as academic. This approach might be considered as distorting the truth for one's own purposes and as a perception management operation.

In fact, Akçam at the very last part of the interview published in the Agos newspaper, states:

As I demonstrate in my book, there was no falsification committed by neither Andonian, nor in any other Armenian. Andonian only published whatever was given to him, and even that only in part. Therefore, I am expecting an open and sincere apology from those who have, since 1983, taken these claims of falsification as fact and used them to justify committing hate crimes and to throw unfounded accusations against Armenians. I would like to state that for my part, I will refuse to discuss this topic with any such individual who has not formally apologized to the Armenian community.[6]

With these words, Taner Akçam is actually declaring that he refuses to discuss his heavy falsification of the arguments of Orel and Yuca with individuals who have not “formally apologized”. He is also unjustly waiting for an “apology”. In fact, these words openly indicate that it would be impossible to make an academic debate and exchange of views with Akçam about his very heavy falsification of the arguments of Orel and Yuca regarding whether Naim Bey was a real person. In such an environment where the disregarding the academic ethics is internalized and methodized, all the possibilities of healthy discussion are unfortunately exhausted. The truth is, such an approach gives an excuse to persons like Akçam to refrain and escape from real academic discussions.