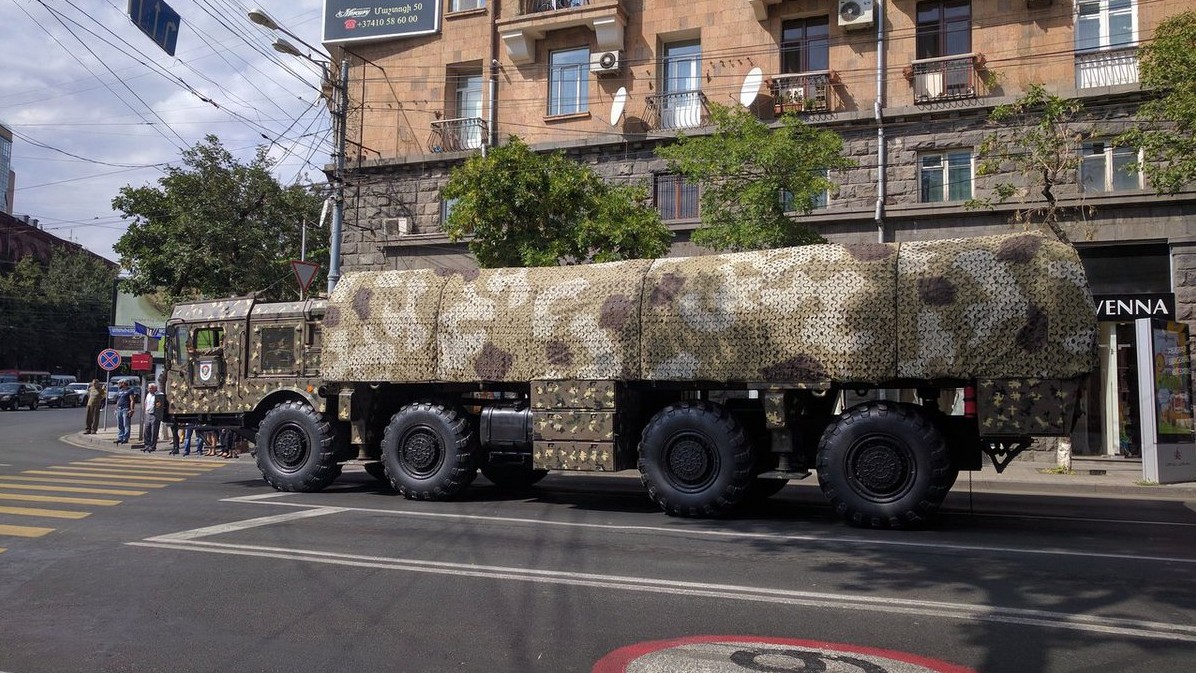 Every state has to establish and maintain a balance in their relations with other states. A major type of international political behavior through which weaker states with limited economic, military and therefore international political influence maintain their security is the “bandwagoning” behavior.[1] This behavior assumes that weaker states need an alliance with a more powerful (and adversarial) state. An isolated country in the South Caucasus which continues its ongoing occupation of Azerbaijan’s Nagorno Karabakh and the surrounding rayons that might eventually lead to a full-scale war, Armenia is in dire need of such a powerful warden. We’ll try to analyze why Armenia finds itself stuck in a bandwagoning relation with Russia clearly in favor of the latter.

Armenia inherited structural and political problems like most of the other post-Soviet countries. Maybe one of the most important of these problems is the enduring Russian influence on the country and the Nagorno Karabakh-conflict that continues to be the major security and political issue. Since Armenia’s borders with Turkey and therefore Europe are closed due to the ongoing occupation of Karabakh, the country has no land access to the outside world other than its unstable neighbor Georgia and Russia. Iran in the south has only recently been able to better its relations with the West and does not present a viable alternative to Armenia’s isolation. Therefore, since its independence, Armenia has been a loyal economic, political and military partner of Russia.

Today, through its membership in the Russia-led Collective Security Treaty Organization (CSTO) and bilateral agreements with Russia, Armenia’s national security inevitably assumes a pro-Russian stance. Russia has its 102nd military base in Armenia’s Gyumri city, in addition to its 3624th Air base in Erebuni city near Yerevan. Moreover, the security of Armenia’s airspace has been effectively consigned to Russian forces through an agreement signed on the 23rd of December 2015 and adopted by the Russian Duma at the beginning of October 2016. This military presence in Armenia is critical for Russia to maintain its influence in the Caucasus region. Armenia is a member of the CSTO, which is seen as rival to NATO, and continues to actively participate in the CSTO drills. In 2016, Armenia has already participated in a CSTO drill in the Arctic that is a heated subject in US-Russia relations, the Cobalt 2016 drill held in Armenia by the CSTO Rapid Reaction Force, the Cooperation 2016 drills in St. Petersburg and the Unbreakable Brotherhood 2016 held in Belarus. Furthermore, Russia sold Smerch rockets and Igla-S mobile air defense systems to Armenia via a loan of 200 million dollars, and also undertook the modernization of the Armenian army.

Having no fossil fuel resources of its own, and its energy production being dependent on natural gas, almost all of Armenia’s energy imports come from Russia. Combined with a low purchasing power, limited energy production makes Armenian economy strictly dependent on Russia. Russia owns Armenia’s and the South Caucasus’ only nuclear plant Metzamor that is located near the border with Turkey. Metzamor continues to be a threat to the whole region as the world’s most unstable plant, whereas it produces about 40 % of Armenia’s electricity. Russia uses subsidies for natural gas as a means to control gas prices in the country. Thus, in 2006, when new talks on the Tabriz-Yerevan natural gas pipeline project began, Russia cut its subsidies for natural gas, causing rapid increases in prices and a short-term economic crises in Armenia. In response Armenia had to give several concessions in favor of Russia: Russians attained the control of the Armenian part of Tebriz-Yerevan pipeline; Hrazdan thermal plant’s remaining shares were sold to Russia, resulting in the sale of 92% shares in 2006 and 100 % shares in 2014 of Armenian national energy company ArmRosGazprom to Russian Gazprom.  Moreover, Russia maintains control of most of the strategically important Armenian companies such as Armentel (telecommunications), Armavia Airlines, Armenian railways, Armenian Efes Insurance Company, Ararat gold company, AOZT Mars and AOZT Yerevan Scientific Research Institute.

The remittances from the Armenians in Russia – which according to official records hosts 1,2 million Armenians[2], while estimations indicate that this number is well over 2,5 million - is one of the most important sources of income for the Armenian economy. Remittances from Russia and other post-Soviet republics to Armenia is estimated to amount over 1 billion dollars in 2016 alone with a 30 % overall decrease compared to 2015. As the war with Georgia clearly shows, Russia keeps these remittances under control; any intervention by Russia to this money flow might disrupt Armenian economy and lead the country to face serious consequences.

This level of economic and security dependency of Armenia on Russia inevitably creates political dependency as well. The Armenian government no longer has ability to make independent foreign policy decisions on critical matters. Recently, the negotiations on the finalization of customs union with the European Union failed in Russia’s favor, when, under Russian pressure and due to the inability of the country’s leaders to govern, Armenia decided to join Russia-led Eurasia Economic Union overnight. Surprisingly, however disappointing the decision to abandon customs union with the EU may be on the part of European leaders, EU still continues several economic aid programs as well as political consultations with Armenia.

Armenia’s relations with Russia depended on a specific assumption: that Armenia’s loyalty to Russia will increase its security against its rivals. However, Armenia’s hopes proved to be wrong during the Four-Day war as a result of which both the political elites and the people in Armenia began to raise their voices against this one-sided dependency on Russia. During the war, neither Russia nor significant members such as Kazakhstan or Belarus showed any support to CSTO member Armenia, or expressed any intention to interfere. Russian explanation for its inaction was that there was no attacks against Armenia. As a result, Armenians were deeply disappointed with the Russian stance. Thus, this crises lead to a raid by the oppositionists of a police station in Yerevan. This incident eventually gained mass support from the Armenian society in favor of the raiders, leading to mass riots in the country’s capital. It’s commonly believed that this social upheaval was a result of the disappointment with Russia and the Armenian government’s policies on Nagorno Karabakh. Some commentators even argued that the government chose to overlook the raid in order to give Russia the message that disappointment with Russian inaction can lead to troubles in Armenia-Russia relations in the future if Russia does not meet Armenian expectations for support.

Not long after these events, Armenian army displayed Russian-made Iskander missile systems during the Armenian national Independence Day parade in Yerevan. Iskander missiles are mobile short-range ballistic missile systems produced and deployed by the Russian Federation, which uses stealth technology, is extremely mobile and able to carry both conventional and nuclear warheads. The system is acknowledged as the most efficient and destructive weapon in the Russian arsenal with the ability to hit a 7 meter radius target and destroy both active military units and capabilities. Several reports claim that these missiles were used against a Georgian armored division of 20 stationed near Gori during the Russian-Georgian war of 2008.

Up until today, Russia had stationed the Iskander missile system only for Russian use. The systems were not sold or donated to any other military. In 2013, Russia stationed Iskander missiles to its military base in Armenia, as well as the regions under the control of the Western Military District, which includes Kaliningrad and the Baltic and the Northern Fleet of the Russian Army, and in March 2016 to the bases in Syria. Thus, these missiles are used to counter-balance the NATO and Western presence in the most critical locations such as the Middle East and Eastern Europe.

As such, the Russian move to give Iskander missiles to the Armenian army can be seen as a show of support to the Armenian government and its pro-Russian policies, and therefore, an attempt to repair the Russian image that was damaged after the disappointment during the Four-Day war. Still, it would be a mistake both for the international spectators and Armenia to define and understand this move in terms of Russian-Armenian relations. Although these missile systems enhance Armenia’s military power in an unexpected fashion[3], it also increases, perhaps irreversibly, its dependence on Russia at a time when the US/Western relations with Russia are heated. For instance, Western commentators recently began to evaluate Armenia’s position as part of a larger Russian military mobility. Iskander missiles obviously made Armenia a subdivision of Russian military operations, despite Armenia’s past attempts to maintain a balance between Russia and NATO and the West. Russian “support” does not aim to provide security for Armenia, but only makes Armenia another target in the face of a possible military conflict with NATO and the US, and gives momentum to an already intense armament race with Azerbaijan.[4]

[4] Azerbaijan’s response to Iskander missiles was to announce that it acquired  armed UAV Orbiter 1K from Israel, an addition to its previous purchase of armed UAV IAI Harpy 2.