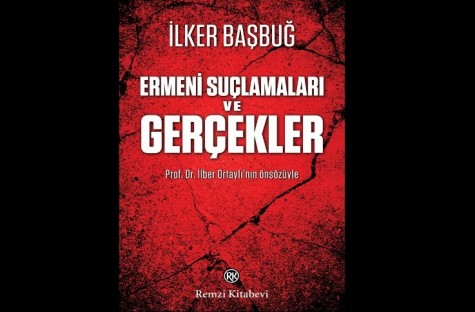 Ermeni Suçlamaları ve Gerçekler (Armenian Allegations and Facts) written by former Chief of the General Staff of Turkey, retired General İlker Başbuğ was published by Remzi Kitabevi in April 2015. In this book, İlker Başbuğ analyzes the resettlement of Armenians in 1915, the decision making process for the resettlement and its results. He critically investigates the “Armenian genocide” discourse and presents his findings and views on the Armenian issue.

Indicating that his aim was to write an easy-read book on the Armenian issue that would provide the reader with necessary information to have a discussion and to convey his knowledge and suggestions on the Armenian issue, Başbuğ divides his book into three parts. The first part analyzes the history of the Armenian issue and the word genocide. The second part deals with three main books that are referred to by those who advocate the ‘Armenian thesis’, namely, Blue Book, Ambassador Morgenthau’s Story and Aram Andonian’s The Memoirs of Naim Bey. In the last part, Başbuğ shares his findings, opinions and suggestions regarding the issue.

First of all, İlker Başbuğ points out that the Ottoman administration was obliged to make the decision to ressetle Armenians in 1915. He indicates that political and military developments in the Balkans encouraged Armenian nationalism and the idea of establishing an independent Armenia took root among Armenians in the second half of the 19th century also thanks to missionary activities in Eastern Anatolia and provocations by Western powers and Russia. To this end, Armenians began a n insurgency and committed terrorist attacks numerous times. Başbuğ emphasizes that the Ottoman government’s decision to relocate Armenians became a necessity due to the fact that Armenians fought alongside the Russian army against the Ottoman Empire and carried out terrorist attacks against the Ottoman army and the Muslim population.

The book underlines that as a wartime necessity, the resettlement was first implemented in the war-zone, but its scope was expanded as the Armenian separatist activities spread to other regions. However it is emphasized that the resettlement never targeted Armenians as a whole[1] and no Armenian was resettled just for being an Armenian. It is pointed out that Catholic and Protestant Armenians and Armenians in İstanbul, Aydın (including İzmir) and Kütahya were not subjected to resettlement. It is also indicated that the Ottoman government took measures to protect the lives and property of Armenians, nevertheless Armenians lost their lives due to shortcomings and mistakes, war time conditions, gang attacks and epidemics. It is also stated that Ottoman officials who were careless and negligent during the resettlement process were tried and sentenced by the Ottoman courts. Thus, Başbuğ rightly asserts that the Ottoman government, who tried to take measures for the safety of its Armenian citizens and tried and sentenced its negligent and careless officials, could not have committed genocide.

İlker Başbuğ emphasizes that with the Treaty of Moscow (16 March 1921), the Treaty of Kars (13 October 1921) and the Treaty of Lausanne (24 July 1923), Turkey-Armenia border was established, all issues between two countries were resolved and no liability was inherited by the Republic of Turkey from the Ottoman Empire. However, he points out that Armenia is the side that creates problems. He indicates that their aim is to get the ‘Armenian genocide’ internationally recognized and pave the way for indemnities and territorial demands by showing Turkey as the continuation of the Ottoman Empire.

In the book, it is stated that due to the fact that Armenians could not prove their claims, they are inflating their losses and try to win over the world public opinion by giving unrealistic numbers. Contrary to the numbers claimed by Armenians such as 1.500.000 which are higher than the total population of Armenians in Ottoman territories, it is stated the number of Armenian losses cannot be more than 300.000.[2] It is also underlined that these losses were due to reasons unrelated to the resettlement process, especially due to diseases. Moreover, it is indicated that the harsh conditions suffered by Armenians did also apply to the Ottomans and thus these were shared sufferings since both sides suffered heavy losses.

It is also indicated that several special propaganda works were prepared to support Armenian theses due to lack of proof of an ‘Armenian genocide’. The book analyzes three prominent books that are referenced by the supporters of the Armenian theses: Blue Book, Ambassador Morgenthau’s Story and Aram Andonian’s The Memoirs of Naim Bey. It is revealed that these books were written for propaganda purposes to influence the public opinion and that it contains fabricated or unverified second and third hand information.

The book also analyzes the legal aspect of the ‘genocide’ and puts forth several factors on why the events of 1915 cannot be legally characterized as genocide. The most important subject that Başbuğ points out is the existence of an intent to destroy a national, ethnical, racial or religious group to establish the crime of genocide as stated in the “UN Convention on the Prevention and Punishment of the Crime of Genocide”. Since there is no written or oral statement suggesting an intent to destroy regarding the events of 1915, he indicates that the existence of such an intent cannot be proven and therefore it is not possible to legally claim that there was a genocide.

Touching upon the policies and strategies that must implemented by Turkey against ‘Armenian Genocide’ allegations, Başbuğ indicates that it is pointless to resolve issues with Armenia whose declaration of independence and constitution includes the aim to seek recognition of the ‘genocide’ and uses the phrase ‘Western Armenia’ suggesting that it has eyes on Turkish territories. Therefore, he emphasizes that Armenia should be the one to take the first step to improve relations between both countries. Indicating that a one-sided apology from Turkey for the events that took place during the resettlement process would be wrong, Başbuğ states that if an apology is to be made, both parties should mutually apologize since both sides suffered.[3] He states that Armenia should first abandon its claims which could be also found in its constitution and declaration of independence and subsequently, both sides should recognize the “shared pain”. However, Başbuğ emphasizes that Turkey should also take Azerbaijan into account, which has many problems with Armenia, and must stand by Azerbaijan.

İlker Başbuğ also mentions that Turkey’s lobbying and public opinion formation activities both in Turkey and abroad are insufficient.[4] He underscores that in order to present its arguments and put forth historical and legal facts, Turkey must place emphasis to such activities. Consequently he states that the first step must be to raise awareness among the Turkish citizens at home and abroad. He indicates that people are unaware of what really happened and what the sufferings of the Turks and Muslims were in that period. Therefore he underlines the importance of education.  Başbuğ also points out the importance of organization among Turkish citizens. Considering the fact that the Armenian lobby and diaspora are using resolutions which they secured in the different parliaments as a means to pressurize Turkey, the significance of lobbying and public opinion formation activities becomes evident.[5]

Unfortunately today, both in Turkey and abroad there is no or limited knowledge regarding the Armenian issue. No one discusses Armenian activities targeting Turks and Muslims, the reasons and the purpose of the Armenians resettlement and under which conditions this decision was taken. Everyone suffered in that period but as pointed out by Başbuğ, it was the Turks who had the most casualties and territorial losses. Sadly, the world is unaware of these facts. While one side makes accusations not knowing these facts, the other side is not able to put forth these facts due to lack of knowledge.

Ermeni Suçlamaları ve Gerçekler is important in this regard. Utilizing relevant sources, İlker Başbuğ compiled all key elements mentioned above and other important details in this book which is clear and easy to read. Moreover, he provides his valuable views on the Armenian issue as a person who held high positions. Ultimately, this book is an important and comprehensive study which puts forth what happened during First World War, the motives behind Armenian allegations, and historical and legal facts against these allegations.

[5] It must be pointed out that ‘genocide’ resolutions adopted in parliaments have no legal value and are only political statements. Only competent international courts can decide whether an events amounts to genocide.