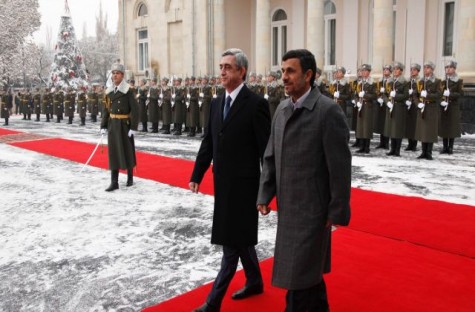 Yair Auron’s op-ed 'Israel must not sell arms to the Azeris'[i] is a strange mixture of baseless accusations, absurd parallels and selective indignation. Auron argues that Israel should not sell weapons to its key ally in the neighborhood, namely Azerbaijan, which is accused of 'genocide' or genocidal desires against the Armenians, nothing less.

The very notion of Israel’s national interest is absent from the article. Since the establishment of diplomatic relations between Israel and the newly independent Azerbaijan in 1991, the relationship has improved consistently. Now 40 percent of the oil consumed in Israel comes from Azerbaijan, a crucial client for Israeli high-tech industries. Meanwhile, the Armenian government has established close relations with the Iranian mullahs.

As relations between Israel and Azerbaijan have improved, anti-Semitic diatribes appear more regularly in Armenian domestic and diaspora publications, in which Israel and Jews are vilified and demonized. Armenia has become a virtually mono-ethnic country, thriving on a daily diet of virulent nationalism bordering on racism. Already back in the 1970s and 1980s, members of the Armenian Secret Army for the Liberation of Armenia (ASALA) terrorist group trained at Palestinian bases in the Bekaa Valley in Lebanon, shoulder-to-shoulder with the inglorious Black September, who attacked the Israeli delegation at the 1972 Munich Olympic Games.

Auron’s description of Azerbaijan is virtually the opposite of the truth. In this country, Jews and Christians – including Azerbaijani Armenians – enjoy equal rights with the Muslim majority. The recent conflict began in 1987, when Azeris were expelled from Armenia and the autonomous Karabakh region. In 1992, the newly independent Armenia, having secured the support of Russia and the nationalist organizations of the Armenian diaspora, attacked Azerbaijan and conquered 20 percent of its territory – not only Karabakh but also seven districts with an overwhelming Azeri majority. All the Azeris were expelled or massacred. In the town of Khodjaly, more than 600 Azeri civilians were systematically exterminated by Armenian armed forces.

Under these conditions, it is no surprise that war rhetoric continues in Azerbaijan (think of France between 1871 and 1914, when Alsace-Lorraine was occupied by Germany) – but there is no state-sponsored racism, no concentration camps and, of course, no gas chambers. The Azerbaijani government has always made clear that it prefers a peaceful solution to retake the territories illegally occupied by Armenia. The comparison with Nazi Germany is absurd.

It is even more absurd when you consider the current official ideology in Armenia: The Republican Party, which has ruled since 1998, openly claims its fidelity to Garegin Nzhdeh (1886-1955), a leader of the Armenian Revolutionary Federation. Considering that supporting Hitler from another country was good but insufficient, Nzhdeh went to Germany at the beginning of World War II and became a member of the Armenian National Council, established in 1942 with the blessing of Alfred Rosenberg, Hitler’s minister for the eastern occupied territories.

Several places received the name of Nzhdeh after independence, including a metro station. You can also find in Armenia the monument of Drastamat Kanayan ('Dro'), a partner of Nzhdeh who led the 812th Armenian battalion of the Wehrmacht and also worked as an agent of the Abwehr, the German military intelligence service. Luckier (and maybe more organized) than Nzhdeh (who died in a Soviet prison), Dro escaped the Soviets and became a CIA agent to secure American support.

The media supporting the current Armenian government and the ARF largely use anti-Semitic rhetoric against those Armenians who do not share their views. Anti-Semitic expressions are recurrent in Armenia today. The only monument in the country dedicated to the Holocaust has been repeatedly vandalized, but the perpetrators were never arrested. Another striking example is the virtual impunity of the neo-Nazi Union of Armenian Aryans.

In short, Auron is totally wrong: wrong in terms of Israel’s national interests, wrong about Azerbaijan and wrong about Armenia.

*This article originally appeared on: http://www.haaretz.com/opinion/.premium-1.623390