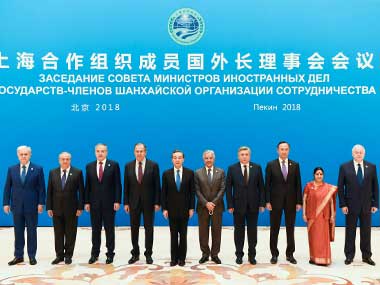 The 18th Meeting of the Shanghai Cooperation Organization (SCO) Council of Heads of Member States was held on June 9-10 in Qingdao, Shandong Province, hosted by China's presidency[1]. SCO emerged in the unipolar world order dominated by United States of America (USA) in different fields, after the end of the cold war. It can be said that the organization is regional. SCO was first established in 1996 by China, Russia, Kazakhstan, Kyrgyzstan and Tajikistan as "Shanghai Five”, the main cooperation point was security at that time. After Uzbekistan’s participation, it changed its name to Shanghai Cooperation Organization[2].The aim of the organization is to strengthen good-neighborly, friendly relations and mutual trust among Member States; to exert common efforts for the protection of regional peace, security and stability; to fight against terrorism, radicalism, separatism, organized crime and illegal migration; to reinforce cooperation in political, economic, scientific, technologic and energy, as well as environmental issues[3]. In the establishment of SCO, an intergovernmental institution, China and Russia intended on cooperating on security in Asia. At the beginning, SCO focused border security among member countries. And then, the SCO has evolved into a multi-tiered structure over time, becoming more than a regional power and becoming an effective global organization. There are also dialogue partners and observer members besides the members. Afghanistan, Iran, Belarus and Mongolia are observer members; Turkey, Azerbaijan, Armenia, Cambodia, Nepal and Sri Lanka are dialogue partners. At last year's Astana summit, India and Pakistan became full members of SCO[4]. This year's meeting is the first summit to take place after India and Pakistan join the organization. Today, the SCO member countries comprise 20 percent of the global economy and 40 percent of the world population[5].

During the two-day Shanghai Cooperation Organization summit, the parties held talks on security, facilitating free trade. They signed documents such as the "SCO Qingdao Summit Declaration" and the "Joint Communique of the Heads of State on Simplifying Trade Procedures", which created opportunities for cooperation in the face of global problems. At the Qingdao summit with the China's terms presidency, Xi's suggestions about global governance and its proposal to develop a common future for humanity reflects the common wishes of people in different parts of the world and shows how the world can solve many challenges, such as climate change, international migration, and poverty[6]. In many ways the 2018 Summit was offering an alternative to the Euro Atlantic pact.  For example, the summit of group of seven (G7) which is group of seven developed countries with the world's largest economy had a summit in Canada's Charlevoix zone at the same time. This G7 summit is also a critical summit. Such kind of coincidental situation gave the opportunity to observe the dynamics of the changes in the Atlantic and Pacific economic blocks. The G7 Summit takes place in an environment in which the United States President Trump's greatest tensions within the developed Western countries put in place protective measures that he often put forward in the context of praise and longing for the return of America's hegemon power, it will be remembered as a summit of tensions between the US and other G7 countries rather than a summit that they have agreed upon[7].

While these developments took place on the Euro-Atlantic axis of the world, the SCO summit on the axis of Asia-Pacific became a platform where the parties declared that they would strengthen the multilateral trading system. Chinese President Xi said that the organization now has global targets rather than regional in his speech at the opening ceremony of the summit. Xi emphasized the global role of the SCO in the Asia Pacific, on the multi-polar world, talking about the agenda items such as the importance of cooperation based on win-win principle and global peace, contrary to the American rhetoric. As a host, one of the key topics of the 18th Meeting of Shanghai Cooperation Organization Council of Heads of Member States for China was the Belt and Road Initiative. Xi's general emphasis here highlighted the importance of economic co-operation and development together. In his speech, Xi also said that China will create a borrowing facility worth 30 billion yuan (US $ 4.7 billion) in the framework of the SCI Interbank Consortium[8]. While Xi built his talk through the phrase "Growing Together", it provided the opportunity to observe discrepancies between the Euro-Atlantic and Asia Pacific summits. Of course, just looking at the words is not enough to reach the conclusion of de-conflict among the SCO's member states. The membership of Pakistan and India has been interpreted as the SCO's loss of influence and power by many analysts. It will be seen in time, the two neighboring countries in the ongoing conflict today from the past being a member of the same organization at the same time whether the SCI’s success of cooperation and regionalization, or an uncounted growth.

This symbolized a gesture that will annoy the White House at the summit which is Iranian President Hassan Ruhani was invited by host China President Xi Jinping for the purpose of a bilateral meeting before the SCO Summit[9].  This move underscores the sustained strength of Iran-China relations irrespective of Washington’s unilateral exit from the Iran nuclear deal, which Beijing has soundly criticized. At a time of rising US-China tensions over trade and regional issues in South China Sea and beyond, Beijing is clearly in no mood to appease Washington by supporting its policy toward Iran.

From Tehran’s vantage point, the pre-summit meeting can provide momentum for Iran’s full SCO membership. Iran has been an observer since 2005 and initially submitted its application for full SCO membership in 2008. Already, Iran’s ties with both China and Russia have deepened in recent months. Iran signed a free-trade zone agreement with the Russia-led Eurasian Economic Union and a bilateral MoU with China earlier this year to expand cooperation under the Belt and Road Initiative[10].