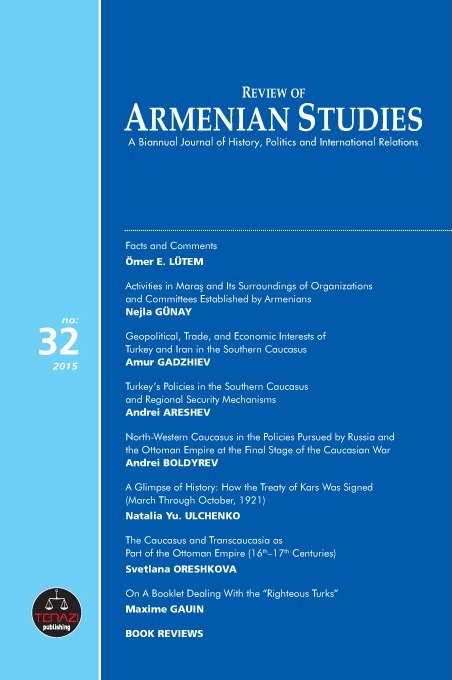 As always, “Facts and Comments” is the first article of this issue and covers the developments in Turkish-Armenian relations, Armenian Resettlement’s centennial commemorations, the recognition of the Armenian genocide allegations by several countries and international organizations, and Turkey’s reaction in this regard. It also analyzes the Perinçek case in the European Court of Human Rights (ECtHR). Lastly, it reveals that several political and legal developments in 2015 ran counter to the “independent Nagorno-Karabakh” claims. Armenians and the Diaspora were expecting that the “Armenian cause” would gain support worldwide in 2015. In reality, support for their cause was limited. Furthermore, the Perinçek case in ECtHR also harmed the claim that the “Armenian genocide” was an indisputable fact, and invalidated the expectation of punishing those who reject the Armenian genocide allegations. On the other hand, a verdict of ECtHR and several developments in the Parliamentary Assembly of the Council of Europe proved that the recognition of Nagorno-Karabakh as an independent state was not possible. In brief, it is possible to state that 2015 was not a good year in terms of Armenians’ policies.

Necla Günay’s article titled “Activities in Maraş and Its Surroundings of Organizations and Committees Established by Armenians” explains that, after the enactment of the Edicts of Reorganization and Reform, Armenians took the Balkan peoples’ attainment of independence as an example for themselves, that they carried out insurrections to first attain autonomy and second attain independence, and that they sought to receive help from foreign powers for their objectives. In this context, the article also analyzes the organizational capacity building and activities carried out Armenians. Furthermore, this article presents the actions of Armenians in Maraş and its surroundings during and after World War I. This article is especially important in the sense that it is based on the use of original Ottoman documents.

This issue contains articles penned by Russian authors on various problems in the Caucasus. These articles look into a number of topics pertaining to South Caucasus studies and present us with examples of the Russian perspective on these topics. These articles are:

“Geopolitical, Trade and Economic Interests of Turkey and Iran in the Southern Caucasus”, by Amur Gadzhiev;

“Turkey’s Policies in the Southern Caucasus and Regional Security Mechanisms”, by Andrei Areshev;

“North-Western Caucasus in the Policies Pursued by Russia and the Ottoman Empire at the Final Stage of the Caucasian War”, by Andrei Boldyrev;

“A Glimpse of History: How the Treaty of Kars Was Signed (March Through October, 1921)”, by Natalia Yu. Ulchenko, and;

“The Caucasus and Transcaucasia as Part of the Ottoman Empire (16th–17th Centuries)”, by Svetlana Oreshkova.

Armenians’, especially Diaspora Armenians’, assessment of Turks is generally negative and in most cases reflect their racist hatred toward Turks. Fearing that this would harm the “Armenian Cause” in the eyes of the public, the term “Righteous Turks” was coined in the recent times. What is meant with this term is Turks who helped Armenians during the resettlement in 1915-1916. It is aimed to balance this “racist hatred” by means of publications and statements praising these “righteous Turks”. The book titled “Report on the Turks Who Reached Out to the Armenians in 1915”, written by Taner Akçam and Burçin Gerçek, is one of the latest examples of such publications. AVİM’s scholar in residence Maxime Gauin, in his article titled “On a Booklet Dealing with the ‘Righteous Turks’”, reveals the mistakes, the nonscientific use and distortion of references, and several contradictions in this book.

Three book reviews can also be found in this issue. These books reviewed are: Détruire les Arméniens (Michael Nichanian), Understanding the Turkish-Armenian Controversy  (Serdar Palabıyık) ve Historical Archives and the Historians’ Commission to Investigate the Armenian  Events of 1915 (Yücel Güçlü).