Institute for Armenian Research, publisher of the bilingual quarterly Ermeni Araştırmaları/Armenian Studies, considering that nearly half of the last issues of the journal is formed by articles in English, decided to publish a separate journal in English naming it Review of Armenian Studies.

Review of Armenian Studies which intends to reach not only Turkish readers and provide them with scholarly views on Armenian matters, will not be merely a translated version of the Turkish Ermeni Araştırmaları although some articles will be published in both journals.

The fist article of this first issue is the Editor’s Facts and Comments which summarizes and comments the main events of the last three months concerning Armenia, the Armenian question and Armenians emphasizing the Turkish-Armenian relations.

Prof. Dr. Seçil Karal-Akgün, in “Some Abstracts From the Mormon Missionaries About the Turks and Armenians” explains not well-known activities of the Mormon missionaries in the Ottoman Empire. It is interesting that they did not share the anti-Turk assertions of the Protestant missionaries.

Prof. Dr. Nedret Kuran-Burçoğlu’s “The Implied Message of Ararat and its Intended Audience” analyses the image creating, stereotyping and image propagating methods and mechanisms of this movie.

In the article “On the Assassination of Van Mayor Kapamajian by the Tashnak Committee” Dr. Hasan Oktay reveals that Ottomans appointed also Armenian mayors. In case of Kapamajian, who gained the esteem of both Muslims and Armenians in Van, Tashnaks did not hesitate to murder him because he did not serve their interests.

We are publishing in this issue two interviews of the Institute for Armenian Research members which appeared earlier in the Turkish press. The first one is with the Director of the institute and concerns main Armenian issues. The second one is with Assist. Prof. Dr. Sedat Laçiner and ?enol Kantarci, authors of the book entitled “Ararat: Armenian Artistic Propaganda”.

Witnessing the ever growing interest in Turkey for Armenian studies three important scientific meetings took place in March, April and May of this year. These are The 81. Anniversary of Talat Pasha’s Assassination: A Look on International Terrorism in Istanbul. Turkish Congress on Armenian Studies in Ankara and international Symposium of Armenian Problem in Turkey in Manisa. In the section “Conferences” concise information is given on these meetings.

This issue of the journal contains also book reviews, information about recent books, the texts of some documents concerning recent events and an index of the first four issues of the bilingual Ermeni Araştırmaları / Armenian Studies. 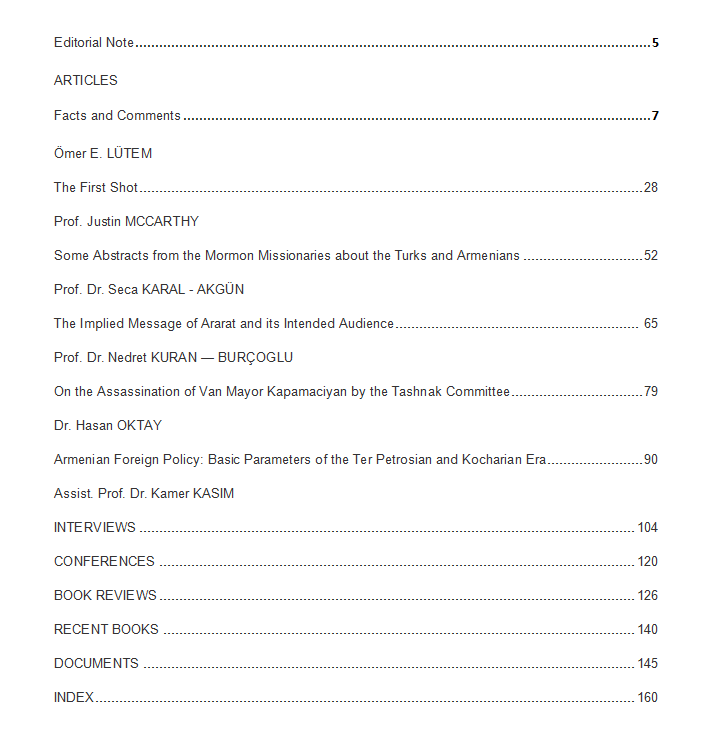