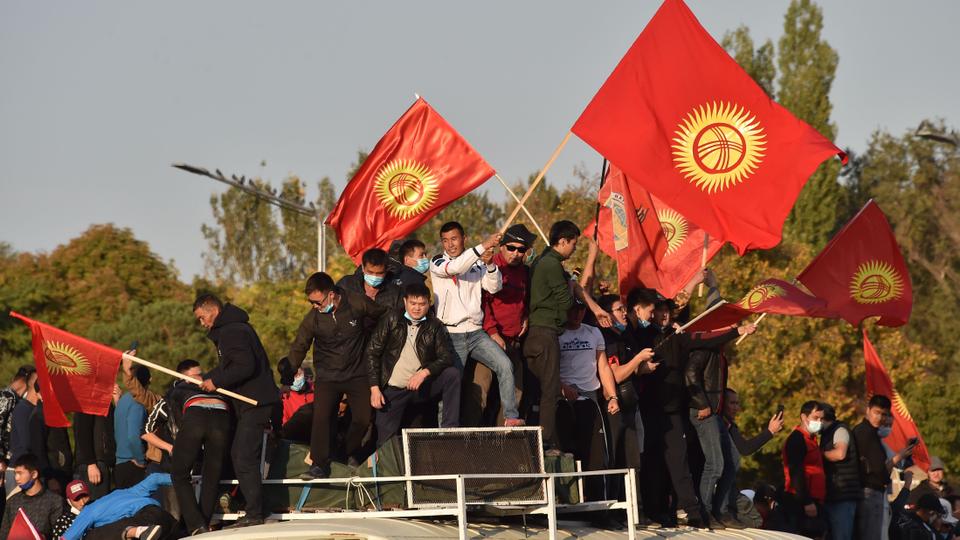 Following the parliamentary elections on 4 October, the Central Asian country of Kyrgyzstan fell into a chaotic state as angry protestors filled the streets and squares demanding the annulment of the results of the elections. What enraged the Kyrgyz was the vote buying allegations. The protestors maintained that vote buying determined the result of the elections which qualified four parties to have seats in the Parliament, the first three of which are pro-government parties. In fact many observers contended that although the overall election process was to a large extent concordant with the international democratic standards, vote buying was widespread.

The events unfolded rapidly in Kyrgyzstan. On 6 October, protestors stormed to several key governmental buildings including the residence of the president and the intelligence service headquarters. Protestors released some political figures serving jail time. Some key figures such as the parliamentary spokesperson and the governor of the capital of Bishkek resigned, and the President Sooronbay Jeenbekov disappeared to an unknown place. On the same day, a Coordination Council was formed by the opposition forces, and the election results were annulled. However, the unity among the opposition disappeared before long and different faction began competing with each other to take as much as power they can get. This resulted in street clashes between different groups.

One of the political figures that was freed from the prison was Sadyr Japarov, who had been serving a eleven and a half year jail time since 2017 for kidnaping the governor of the town of Karakol in 2013. Freshly out of the jail and backed by a strong group of protestors, Japarov triumphed over other opposition leaders mostly thanks to the strength of his supporters in the streets and declared himself as the PM on 7 October. On 9 October, President Jeenbekov declared state of emergency in Bishkek, dismissed the cabinet, and announced that he will resign once the dust settles. The next day, the parliament appointed Japarov as the PM. Four days later Jeenbekov approved this appointment, and the next day on 15 October resigned from the presidential post. As a result, on 16 October, Japarov became the acting president, as well. In brief, in ten days, Japarov the convict turned into both the PM and the acting president of the country; He became the number one person in Kyrgyzstan in a little more than a week,

However the story does not end here. Japarov made several key appointments in the cabinet, intelligence service, security establishment, custom services and the prosecution office. Meanwhile, some high profile figures including the rivals of Jabarov were detained for different charges. There have been more substantial developments that are likely to shape the future of the country, too. On 19 October, Japarov made his intention to become the president public. Two days later, on 21 October, 20 December announced as the new parliamentary elections day. Yet, the next day, on 22 October, parliament postponed the parliamentary elections to be held after constitutional amendments. Eventually, on 24 October a new political calendar was declared.

According to the new calendar, the early presidential elections were scheduled for 10 January 2021. The parliamentary elections, on the other hand, were postponed to an unspecified date before July 2021, notwithstanding the constitution that obliges these elections to take place in two months. The new authorities behind this move stated that parliamentary election will be held after constitution is amended. Meanwhile, because the Kyrgyz constitution does not allow the acting president to run for the president, Japarov declared his intention to resign from his current post.

On 17 November, sixty one draft constitutional amendments were disclosed. Overall, these draft amendments foresee to increase the powers of the president, while decreasing those of the parliament. The proposed amendments appoint the executive powers, which are, according to the current constitution, rest in the Parliament, to the President, and decrease the seats in the parliament from 120 to 90. One of the most controversial amendments in this regard foresees the creation of a People’s Council –Kurultai, an executive body, which parliament and the government would report to. The proposal to establish Kurultai is perceived as an attempt to usurp all the powers of the parliament. Critics also questioned why a different body, that is, Kurultai, should have leverage on the parliament, the members of which, at least theoretically, represent the people. Another important proposal is about the tenure of the president. Although there is an ambiguity because of the different wordings in Kyrgyz and Russian texts of the proposed amendments, it seems that the tenure of the president which is currently one six year-long term, is planned to be prolonged to two terms. There are also other proposed amendments that may restrict media sphere and the right of expression and peaceful assembly of the citizens. As to the latter, the new proposed amendments outlaws public assemblies that run contra to generally recognized moral values and traditions, albeit without defining what these are. Besides the amendments, the procedure of the referendum, as well as the obscurity as to whom and how these amendments were determined also raised concerns. For all these, the would-be new constitution is labeled as “Khanstitution” by its critics, who sustain that the real objective of Japarov is to usurp all the powers of the political system of Kyrgyzstan by converting the the semi-presidential system of the country into a super-presidential one. Yet, despite these complaints and criticisms, constitutional referendum was scheduled to the day of the presidential election on 10 January 2021. On 24 November, Japarov resigned from the acting president and the PM to be eligible for the candidacy in the presidential elections.

Kyrgyzstan, one of the poorest countries in Central Asia, is widely regarded as the only democracy in this region despite all the flaws. In fact, some Western commentators explain the recent disorder in the country by pointing out the alleged success of the democratization in the country. Certainly, those who speak about the level of democracy in Kyrgyzstan do so in relative terms. The bad news is that there is a significant probability that Kyrgyzstan, the “Switzerland of Central Asia,” as some put so, may enter a chaotic period of uncertainty.