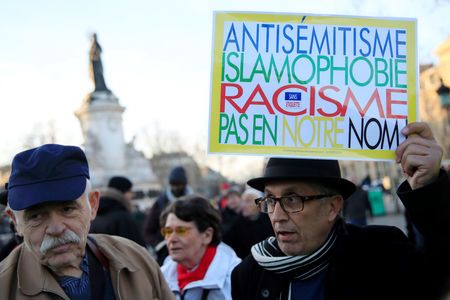 The rise of the extreme right and the rise of xenophobia in Europe have long become problems growing each day for the people living across the European countries. In recent days, especially in France, we are witnessing news reports that anti-Semitic attacks have increased. The concern for the “normalization of anti-semitism” has reached disturbing dimensions in Europe.[1]In particular, France, which has been witnessing anti-Semitic attacks for some time, is now struggling against anti-Zionism. However, the extreme-right has not only caused anti-Semitism or anti-Zionism, but also the rise of Islamophobia. In this period Islamophobia is mostly ignored.

The Fundamental Rights Agency-FRA found that, due to the recent rise in anti-Semitism, 40% of the Jewish community of Europe had to leave their homes as they do not feel safe. According to the report, 90% of respondents stated that anti-Semitism had been rapidly rising since 2013.[2]Recently, similar to anti-Semitism as a result of the rise of the far-right, anti-Zionism has been increasing. Therefore, a group of members of the French Parliament are preparing[3]to introduce a bill to criminalize anti-Zionism[4]. MPs defending the bill stated that the anti-Semitism has been increasing even more violently as racists have been hiding behind anti-Zionism.[5]

The fact that anti-Semitic attacks in France increased by 74% in one year has become alarming. Although the news about Islamophobic attacks do not appear often, it was revealed in the investigations conducted that there was also a significant increase in the Islamophobic attacks and that those who were affected the most were women. Collectif contre l'islamophobie en France-CCIF[6] pointed out that 70% of Islamophobic attacks in Belgium were against women and that 85% of those who received more than eight days of incapacity reports after being exposed to Islamophobic attacks were women.[7] The main problem in Europe is the existence of Muslims and this problem has pushed the Jews forward as a problem. The current debates on Islam have led to the re-emergence of past debates about the place of Judaism and Jewish identity, which has brought to mind the re-discussion of the situation of Jews.[8]Both religions show similar characteristics. However, despite these similarities, it is observed that these are two religions estranged from each other in Europe. Professor Nilüfer Göle underlines the fact that, after the Holocaust, Europe is experiencing a reconciliation process, the thesis that European civilization is not only “Greco-Roman” but, “has Jewish-Christian roots” is expressed more strongly. Whatever the case may be, it is not uncommon to expect from France, which struggles for Judaism and Zionism, and does not accept attacks on the existence of the country, to have similar efforts for Muslims since it should only be natural to expect the same sensitivity for them.

[3] Zionism; It is the ideology of Jews to establish a state within the boundaries of the Jewish state to establish the right to self-determination.