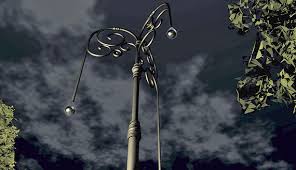 A monument named “the Streetlights of Memory” also financed by the Armenian diaspora was erected to recall the 1915 events in the Geneva Canton of Switzerland on April 13th 2018.[1] To briefly recap, the process that has been controversial for a long time began in 2008 when the Geneva Canton parliament authorized the construction of a genocide monument.[2] A park in the city center was chosen for the location at first, but then it was decided to be constructed somewhere else due to the first location being an archeological site. After that decision, the Ariana Park located in front of the UN Office was set as a probable site. The possibility that such a monument would be placed right in front of an international organization like the UN caused both the Swiss government and the UN to feel uncomfortable. The Swiss Federal Government pointed out that they do not have authority over town planning and that only the cantonal administrations could authorize building permits. However, the Swiss Foreign Affairs Ministry sent a letter of recommendation to the cantonal administration on the location of the monument and assessed that "the location of the memorial close to the UN building and other international organizations’ representatives would harm Switzerland's impartial and peaceful stance".[3] In response, the Geneva administration decided not to build the monument in Ariana Park.[4] Following that decision, the associations of the Armenian diaspora submitted a new application to the Geneva administration to build the monument in Trembley Park which is also not far from the UN building.

The process was brought to trial in 2008 and the complaints of the locals that were living around Trembley Park were delivered to the necessary authorities under the guidance of Celal Bayar, the president of the Federation of Turkish Associations of Western Switzerland, and Attorney Yves Nidegger. However, last March, the Geneva Cantonal Court gave its affirmative decision on the construction of the monument.[5] After that, Nidegger appealed to the Swiss Federal Supreme Court, yet the monument had been unveiled while the judicial process was proceeding.

The most important objection to the monument is that the construction was financed by a specific ethnic group in a public area and had the aim to politicize the park and its premises.[6] Indeed, when one views the locations selected for the monument, especially the proximity to the UN building, it demonstrates that there is a political purpose.

On the other hand, Nidegger who is also the attorney in the Case of Perinçek v. Switzerland mentioned that the Geneva administration should be more careful regarding legally and scientifically controversial matters. Switzerland has experienced this situation in the Perinçek case before. An assessment about the legal nature of the 1915 events was made by the EHRC in the decisions of Perinçek-Switzerland case. The court clearly stated that the existence of the crime of genocide depends on the emergence of conditions defined in the 1948 Genocide Convention and the decision of the authorized court. Furthermore, in this sense it is not considered right for national parliaments or local authorities to take decisions on historical events without legal certainty.[7] After that experience of Switzerland, one should be more careful against the consequences and political meanings behind the monument in Geneva. The exhibition of the product of unilateral historical narrative under the name of a genocide monument in a public area will hurt the impartial nature of Switzerland and, consequently, Geneva.

Lastly, the spokesman of the Turkish Foreign Ministry brought an alternative view to this subject and reminded the activities of ASALA in his response to the question about the monument.[9] In 1981, Mehmet Savaş Yergüz, a contracted personnel working at the Consulate General of Geneva was killed in an armed attack by the terrorist organization ASALA. In view of these events, which have many memories of mutual suffering in terms of shared memory, it is necessary to be more equitable and sensitive in accordance with objectivity. The acceptance of a unilateral historical narration in Geneva means that Switzerland will lose its role as an impartial actor of the international community as claimed.