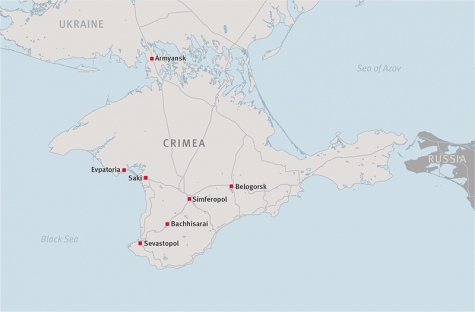 
Human Rights Watch (HRW) is an independent, international organization that works as a part of a vibrant movement to uphold human dignity and advance the cause of human rights for all.  Following the establishing of Russian control in Crimea as a result of local referendum and subsequent Treaty on the Adoption of the Republic of Crimea into the Russian Federation between local Crimean authorities and the Russian Duma as of March 2014, HRW produced an extended report on human rights abuses in Crimea. The report, issued in November 2014, is based on the on-site research that was done in October 2014 and March 2014 during which numerous meetings and interviews were conducted with Crimean journalists, activists, lawyers, members of the Crimean Tatars community and civil society activists. As HRW comments, on November 6, 2014 the summary of the research findings was sent to the Crimean authorities. There has been no response to it as of the moment of this publication.

Persecution of Crimean Tatars and Harassment of the Crimean Tartar Mejlis


HRW report includes, in particular, the sections focusing on persecution of Crimean Tatars and harassment of Crimean Tatar media outlets. Crimean Tatars are an ethnic group in Ukraine which currently consists in major part of Tatars who have been returning to Crimea since mid-1980s after the deportation of more than 240,000 people to distant regions of the Soviet Union in 1944. As of the data of Census 2001, Crimean Tatars constitute approximately 12 percent of the population of Crimean Peninsula. The higher representative and executive body of the Crimean Tatars is the Millli Mejlis, which is supported by a network of district and local mejlises formed in all the parts of Crimea populated by the Crimean Tatars. The Crimean Tatar Mejlis is comprised of 33 members elected each 5 years.


The position of the Mejlis towards Russia’s occupation of Crimea was openly negative from the very beginning. In March, the Mejlis encouraged the Crimean Tatars to boycott the referendum on Crimea status and called on the local authorities to disarm the self-defense units. In response to this, the new authorities of Crimea banned – as early as April 2014 - the former chair of the Mejlis and informal leader of the Crimean Tatars Mustafa Dzhemilev from entering Crime for five years as Russia’s Federal Migration Service declared him a persona non grata in Russia. While Dzhemilev has not been officially charged with any offence, his house in Crimea was searched in his absence. In May 2014, about 2000 Crimean Tatars came to greet Dzhemilev at the border of Crimea with the continental Ukraine. At the same time there was a wave of peaceful protests in several towns in Crimea against Dzhemilev’s ban. As a result of these protests, administrative proceedings were initiated against several dozens of Crimean Tatars. Since HRW was not able to observe or independently research on the May events, they are not in position to comment whether the administrative charges and fines were indeed proportionate to the particular incidents. Nevertheless, HRW points out that the authorities, without producing new specific evidences to justify it, referenced May events as a ground for extensive searches, warnings and other measures against Crimean Tatar individuals and groups.


Overall, the authorities of Crimea, as HRW reports based on numerous documents, press reports and interviews, constantly employ in their rhetoric accusing Crimean Tatars in possible provocations and allegedly extremist actions. In particular, the prosecutor of Crimea repeatedly issued several warnings to the Mejlis against extremist actions while, in September 2014, the de facto prime minister of Crimea made a public statement claiming Mejlis “not a legal organization” and having “very little authority” among the Crimean Tatars. The same month the offices of the Mejlis, the Crimea Foundation, the charitable organization that administers the Mejlis and the Mejlis newspaper “Avdet” were searched. The justification for that was a court order to conduct the search with the purpose of “finding weapons, firearms and publications inciting racial, gender or religious discourse”. On September 16th, Riza Shevkiev, the general director of the Crimea Foundation and a Mejlis member, was presented the court decision stating that the administrative proceedings were initiated against the Foundation since one of its founders was Mustafa Dzhemilev, banned from Russia, and this violated Russian law regulating noncommercial organizations. Even though the Foundation’s founding documents did not list Dzhemilev as one of the founders and his position of the president of foundation was rather symbolical, the court did not take these documents into consideration. Shevkiev had to assemble the conference of the board of the foundation and to remove Dzhemilev from the position that he never, in fact, occupied. By November 2014 the offices of the Mejlis and “Avdet” remained sealed by the court decision and their bank accounts were frozen.


Since the start of the Russian occupation of the peninsula that began in February 2014, HRW has reported limited free expression, restricted peaceful assembly, and intimidation and harassment of the parts of population opposing Russia’s actions in Crimea. In particular, HRW informs about pressure imposed on the Crimean Tatar community, including enforced disappearances and unlawful detention and ill-treatment of Tatar journalists, political activists and other presumably pro-Ukrainian individuals. Among others, homes of Mejlis members and other Crimean Tatars have been regularly searched, especially before significant public events. More intrusive searches took place before local elections on the 14th of September when local police and  the FSB staff detained inhabitants of searched homes claiming to be looking for prohibited literature, weapons and drugs and questioned them about their religious beliefs. HRW has reported that intrusive searches were conducted in mosques and Islamic schools. Armed people, including police officers and FSB, forcibly enter schools breaking doors and windows and doing an extensive search examining not only schools’ libraries but also personal possessions of the students. HRW also reports on numerous abuses carried out by the so called Crimean self-defense units, armed paramilitary groups created to prevent opposition to Crimea’s status. These groups are regularly involved in abduction, unlawful detention, ill-treatment including torture and harassment of pro-Ukrainian activists and minorities. HRW informs about numerous cases of Tatar and pro-Ukrainian activists, journalists and people considered to be in opposition being beaten, abducted, unlawfully detained and interrogated.


As HRW claims, the main Crimean Tatar TV channel, ATR, is publicly referred to by these groups as “the enemy channel” and the journalists of this channel were attacked several times. In addition, HRW documented and reported on at least 15 cases of forcible disappearance or abduction of Crimean Tatars in Crimea. When the ATR channel was reporting on the wave of searches of Crimean Tatar’s homes, schools and mosques in September 2014, FSB called requesting them to refrain from airing this material. When the representatives of the channel responded that they were not inventing the coverage but just reporting the facts, they were threatened by immediate closure of the TV station. Some ATR journalists are prevented from reporting on covering on official events without explanation. HRW reviewed an official letter from the Interior Ministry’s Center for Combating Extremism to ATR’s director, stating that the center received information that ATR’s editorial policies were directed at creating “anti-Russian” public opinion and inciting “distrust towards authorities among the Crimean Tatar population.” The letter also requested that channel provide the center with copies of its registration documents, documents authorizing ATR’s work, and all administrative documents, including the office rental agreement.


Human Rights Watch stresses that international human rights law remains applicable to Crimea, including all treaties ratified by Russia, such as the European Convention on Human Rights and the International Covenant on Civil and Political Rights. The November report is supported by the recommendations of HRW to the Authorities Exercising Effective Control on the Crimean Peninsula, the Russian Federation, the UN, OSCE and Council of Europe as well as to the Government of Ukraine. Among those, the Crimean authorities are called to cease all actions targeting the Crimean Tatars community justified only by allegedly extremist actions, provide access to the peninsula for humanitarian and intergovernmental organizations monitoring human rights without imposing restrictions on their activity and to reverse the process whereby Ukrainian citizens were required to choose between Russian and Ukrainian citizenship. They also call the authorities of Crimea to ensure that no Ukrainian citizen is pressured, directly or indirectly, into accepting Russian citizenship and that there are no adverse, including discriminatory, consequences for those who retain Ukrainian citizenship.