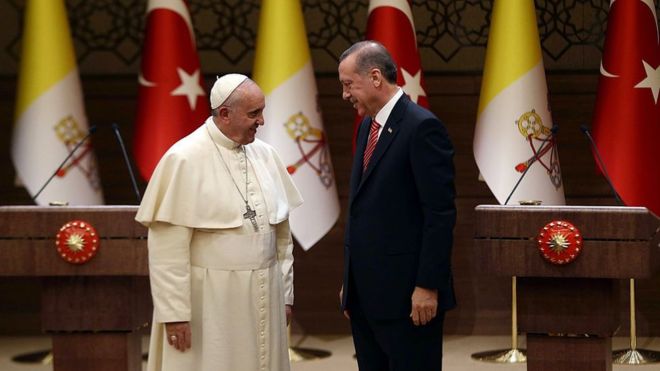 1) Turkey-Vatican relations, which were damaged following Pope Francis’ mentioning of the genocide claims regarding the 1915 events in 2015, have been restored following an intense diplomacy traffic.  The 5 February meeting, which will take place at a state level, will be a suitable occasion for the relations between the two sides to be consolidated. In addition, the Roman Catholic Church, representing a major religious denomination, places importance on interfaith dialogue. In this regard, the Roman Catholic Church’s high-level meeting with Turkey, which is among the world’s most prominent Muslim-majority countries, will serve to further the Church’s search for interfaith dialogue.

2) US President Donald Trump’s decision in December 2017 (based on domestic policy considerations) to recognize Jerusalem as the capital of Israel had created another subject of tension out of thin air in the Middle East, a region where tensions had already been at a high level. With the awareness that such a decision would harm everyone, President Erdoğan and Pope Francis had opposed US’ decision and had discussed this subject over the phone. It is certain that the Jerusalem issue will be on the agenda in the President Erdoğan-Pope Francis meeting that will take place on 5 February. Thus, Turkey and the Vatican will have an opportunity for high-level coordination to prevent the creation of tensions through Jerusalem, which has great spiritual value for the three monotheistic religions.

On the other hand, it is beneficial for Turkey to approach its relations with the Papacy with caution. Ever since Pope Francis assumed his position, a subject he has given importance to is ecumenism, which is ensuring union among Christians. It can be remembered that, in the recent past, Pope Francis has displayed a line of conduct that has aggrieved both Turkey and the Muslims in the name of attaining ecumenism.

The Roman Catholic Church, even if it does not clearly emphasize this, positions itself higher than all other Christian churches in the world, and wishes to gather the other churches around itself. In this regard, it has not become a member of the world’s largest church union, the World Council of Churches, and has instead built institutional relations with the Council. Pope Francis has made various contacts in line with his aim of ecumenism. For example, in 2016 Pope Francis held a meeting with Patriarch Kirill, the spiritual leader of the Russian Orthodox Church (world’s largest Orthodox church) and issued a joint declaration.[2]

The support shown by Pope Francis in 2015 for the Armenian genocide allegations at the expense of damaging the Roman Catholic Church’s relations with Turkey can also be explained by this search for  ecumenism.[3]  With his statement, Pope Francis was able to bring the Armenian Apostolic Church and Armenians in general to his side, and strengthen his Church’s position in their regard. On top of this, during his visit to Armenia, Pope Francis deviated from the previously prepared text of his speech by again touching upon the genocide claims, and thus once again damaged Roman Catholic Church-Turkey relations.[4] Naturally, this move consolidated the admiration Pope Francis had garnered from the Armenians.

Pope Francis exhibited a similar line of conduct during his visit to Bosnia-Herzegovina in 2015. Despite the calls that had been made to him, Pope Francis did not mention the Srebrenica Genocide during his visit.[5] Pope Francis’ conduct can be explained by his wish to avoid offending the autonomous Republika Srpska (of Bosnia-Herzegovina) and Serbia (both with Orthodox-majority populations), and indirectly offending Russia (and the Russian Orthodox Church) that has close relations with Serbia. The reason for this is that the Srebrenica Genocide still constitutes a sensitive subject for the Serbs.

Lastly, during his 2017 Myanmar visit, Pope Francis made no mention of the systemic persecution faced by the Rohingya people. According to some commentators and United Nations officials involved in this issue, the said persecution have reached such levels that they might constitute genocide. Despite this, Pope Francis did not touch upon this issue. Taking a look at what had been written prior to the Myanmar visit,[6] it can be understood that the main reason for this indifference was the fear that the mentioning of the Rohingyas might have led to the Christian minority of Myanmar facing reprisal attacks from the country’s radical Buddhists. Meanwhile, in a speech he made after the Myanmar visit,[7] Pope Francis implied that he did not mention the Rohingyas so as to avoid instigating a crisis during his visit. Therefore, fearing that Christians could get hurt, Pope Francis made a tactical decision and ignored the persecution faced by a Muslim people.

Due to his official position as the spiritual leader of the Roman Catholic Church and as the ruler of the Vatican City State, Pope Francis possesses two identities; he is both a religious functionary and a  head of state. The prestige that the Roman Catholic Church will attain with the furtherance of ecumenism will strengthen the moral position enjoyed by the Church in the Christian world, which will naturally lead to an increase in Vatican’s power. This drive for attaining prestige and power helps explain the approaches and inclinations exhibited thus far by Pope Francis.

[6] AVİM, “THE HUMANITARIAN APPROACH AND ACKNOWLEDGMENT OF THE IDENTITY OF THE ROHINGYA SHOULD NOT BE SEPARABLE,” Center for Eurasian Studies (AVİM), Commentary No: 2017 / 90, December 6, 2017, http://avim.org.tr/en/Yorum/THE-HUMANITARIAN-APPROACH-AND-ACKNOWLEDGMENT-OF-THE-IDENTITY-OF-THE-ROHINGYA-SHOULD-NOT-BE-SEPARABLE