THE PASSING AWAY OF THE ARMENIAN PATRIARCH OF ISTANBUL MESROP II AND THE NEW PATRIARCH ELECTION PROCESS
Commentary No : 2019 / 26
AVİM
27.03.2019
8 min read 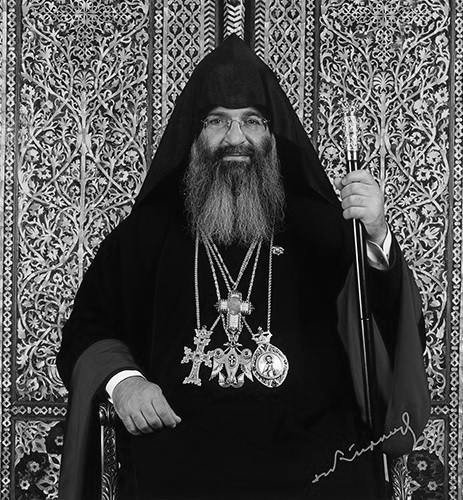 The Armenian Patriarch of Istanbul Mesrop II Mutafyan passed away on 8 March.[1] Beginning from 2018 when Mesrop II became unable to serve his duties due to his illness, various circles attempted to create a problem out of the matter of how to deputize the office of the Armenian Patriarch. During this process, Armenia as well as the members of the Armenian diaspora created complications and tensions by attempting to interfere in this internal affair of Turkey despite having no authority to do so.

Currently, Archbishop Aram Ateshian serves as the General Vicar (Acting Patriarch) to perform the patriarchal duties of Mesrop II. An Advisory Committee formed by General Vicar Ateshian carries out the affairs of the Patriarchate. With the passing away of Patriarch Mesrop II, the path is now open for the holding of the elections, since prior to this, the Governate of Istanbul had stated that elections could not be held so long as the current patriarch was alive. However, the passing away of the patriarch is a new development. The late patriarch was laid to rest on 17 March and the Patriarchate declared a period of mourning lasting until Easter (21 April).[2] As such, neither the planned date for the election nor the names of the patriarch candidates are known for the moment. These matters will probably start to gain clarity after the passing of the period of mourning.

As indicated in the beginning, Armenia has tried to interfere in the patriarch election process. In February 2017, the head of the Armenian Catholicosate of Etchmiadzin (situated in Armenia) Karekin II went beyond simply voicing his opinion by arbitrarily calling Turkey’s relevant Armenian religious functionaries to account for the election of the Armenian Patriarch of Istanbul and summoned them to Armenia for a meeting.[3] Yet, being one of the four main administrative centers of the Armenian Apostolic Church, the Armenian Patriarchate of Istanbul is one of Turkey’s institutions that conducts its internal affairs independently and has no obligation to answer to any institution or individual outside of Turkey. As such, by making such a call, Karekin II attempted to overstep the scope of his authority.

The election of the spiritual leader of the Armenian community in Germany Archbishop Karekin Bekchian as the değabah (trustee) in a fait accompli manner during an election held at the Armenian Patriarchate of Istanbul in 2017 was the domestic outcome of a foreign interference. Despite the Governate of Istanbul having indicated that the trustee election lacked an official status in the eye of the Turkish government,[4] Archbishop Bekchian continued to claim that he was the trustee and, with the extremist mindset of the Diaspora, attempted to engage in a power struggle against the Government. Bekchian maintained this bellicose stance and illegitimate occupation of office until the Governate of Istanbul announced on February 2018 that it did not recognize his trusteeship claim.[5]

Catholicos Karekin II’s interference and Karekin Bekchian’s trusteeship claim only resulted in needless complication and tension in the patriarch election process. However, from what can be gathered from the news, Karekin II has tried to learn from such mistakes and has sought a more diplomatic way to become involved election of the Armenian Patriarch of Istanbul. Per Karekin II’s request, the Armenian Apostolic Church’s representative at the Vatican Archbishop Khajag Barsamian requested an appointment from the Turkish Minister of Foreign Affairs Mevlüt Çavuşoğlu via Turkey’s embassy in Rome. Upon the appointment request being met with a positive response, Archbishop Barsamian, along with the Director of Ecumenical Relations of the Catholicosate of Etchmiadzin Very (Senior) Reverend Shahe Ananyan, came to Turkey and were hosted by General Vicar Ateshian. On 4 February 2019, the delegation formed by these three religious functionaries paid a visit to the Minister of Foreign Affairs Çavuşoğlu.

While the details of this visit were not announced, it was confirmed that the patriarch election was a topic of conversation and that Minister Çavuşoğlu indicated that “the [Turkish] Government was paying attention to the issue of the Patriarch Election and following the [related] developments” and that “patience was required in reaching to a solution”.[6]

1) Archbishop Barsamian, who was chosen to conduct this diplomatic contact, has an interesting background. Until recently, Barsamian had served as the Primate of the Eastern Diocese of the Armenian Apostolic Church in the US. However, announcing he would not seek another term as the primate, Barsamian left the US after the end of his term in office and was subsequently appointed as the Armenian Apostolic Church’s representative (legate) at the Vatican. During the foreign interference in the patriarch election process, rumors surfaced that Barsamian would run as a patriarch candidate. In statements made to the press, Barsamian confirmed that various circles had proposed to him that he should run as a patriarch candidate, but that he had politely refused such proposals.[7]

2) It can be gathered from the statements given to the press by Barsamian after the meeting with Minister of Foreign Affairs Çavuşoğlu that Karekin II and the Armenian Catholicosate of Etchmiadzin have sought to avoid creating the impression that there is an attempt at foreign intervention towards Turkey concerning the patriarch election. The following words by Barsamian demonstrate this diplomatic stance and the acknowledgement that the patriarch election is a domestic matter of Turkey:

“We know that the election process takes place within the framework of the rules having been implemented by Turkish Armenians for many years and the permission of the government. We make do with congratulating the outcome of the election. His Holiness (Karekin II) requested my initiative to relay his views on this matter.

The Minister [Çavuşoğlu] received us very warmly, and I indicated very clearly that our intention was not to intervene in this matter from the outside, that we wished only to indicate our concerns, and that we would be happy to help should there be any situation which we might be of help. As for the Minister, he told us that this was a domestic matter and that the Government also wanted the patriarch election to take place but that a little more patience was needed. I felt that the Minister’s words were sincere.

My impression is that they [the Turkish government] wishes that this process proceeds as calmly as possible and that no tension is experienced within the community.”[8]

3) General Vicar Ateshian has been subjected to various defamations, for example that he has allegedly hindered the holding of the patriarch election, by various circles such the Agos newspaper that has in recent years adopted the extremist mindset of the Armenian Diaspora as its publication policy. Behaving completely contrary to what has been alleged, Ateshian hosted Khajag Barsamian and Shahe Ananyan during their stay in Turkey and participated in the meeting held with the Minister of Foreign Affairs Çavuşoğlu.

Some circles have tried to interpret this diplomatic visit that has received positive public feedback differently. For example, the Agos newspaper on 15 February shared with its readers the views of the Dean of the Yerevan State University’s Faculty of Oriental Studies Rupen Melkonyan concerning the meeting between Turkish Minister of Foreign Affairs Çavuşoğlu and Archbishop Barsamian. Melkonyan tried portraying Archbishop Karekin Bekchian as a being victim, and indicated that the Armenian Catholicosate of Etchmiadzin does not view the delay in the patriarch election “as being natural” and that it wishes to “negotiate” with Turkey concerning this matter. Furthermore, Melkonyan argued that it was unusual situation for Khajag Barsamian and Shahe Ananyan to meet the Turkish Minister of Foreign Affairs instead of the Minister of Interior or the Governor of Istanbul.

AVİM will continue to closely follow the Armenian Patriarch of Istanbul election process. Our wish is for the election to be concluded as soon as possible and for it to be devoid of attempts at foreign interventions that cause complications and tensions. We would like to take this opportunity to express our condolences to the late Mesrop II Mutafyan’s family and friends and our Orthodox Armenian citizens.

[4] AVİM, “Outside Intervention To The Election Of The Armenian Patriarch Of Istanbul Continues.”

[5] Mehmet Oğuzhan Tulun, “THE ELECTION PROCESS OF THE ARMENIAN PATRIARCH OF ISTANBUL HAS BEEN RESET,” Center for Eurasian Studies (AVİM), Analysis No: 2018/12, May 9, 2018, https://avim.org.tr/en/Analiz/THE-ELECTION-PROCESS-OF-THE-ARMENIAN-PATRIARCH-OF-ISTANBUL-HAS-BEEN-RESET