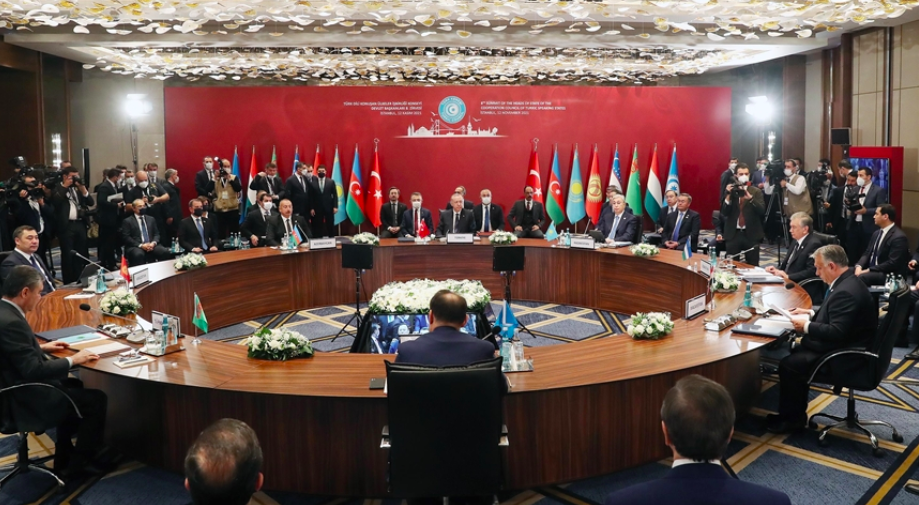 Bringing together the leaders of the Turkic world, the 8th Summit of the Turkic Council was held in Istanbul on 12 November 2021. Presidents of Turkey, Azerbaijan, Kazakhstan, Kyrgyzstan, Uzbekistan, and Turkmenistan, as well as the Prime Minister of Hungary, attended the summit held on the Democracy and Freedom Island with the theme of “Green Technologies and Smart Cities in the Digital Age”.The Turkic Council, Turkic Chamber of Commerce and Industry (TCCI), and the Union of Chambers and Commodity Exchanges of Turkey (TOBB) held a Turkic Business Forum in Istanbul on 10 November 2021 within the scope of the 8th Summit of the Turkic Council, which aimed to bring the relations between Turkish speaking countries to the highest level. At the meeting attended by the representatives of companies operating in various sectors from Turkey, Azerbaijan, Kazakhstan, Kyrgyzstan, Uzbekistan, and Hungary, attention was drawn to the liberalization of trade between the Turkish States and increasing the potential of the economy, trade, investment, and logistics.[1] Immediately after this meeting, the 8th Meeting of the Council of Foreign Ministers was held on 11 November 2021 within the framework of the 8th Summit of the Turkic Council. At this meeting, the Foreign Ministers of the member countries discussed the agenda and program of the Council of Heads of State meeting that was to be held on 12 November, and reviewed the decisions to be signed by the Heads of States, the draft of the Summit Declaration, and Turkic World 2040 Vision document.[2]

At the 8th Summit of the Turkic Council, which was held with the participation of the leaders of 6 countries and hosted by Turkey, the areas of cooperation that can be improved in many fields, especially in economic, cultural, trade, and social issues, were emphasized. In this context, special attention was given to the signing of the Trade Facilitation Strategy Document with the aim of increasing both trade and mutual investments and meeting 10 percent of the total trade volume between the Turkish States and the rest of the world. The obstacles to the achievement of the trade targets determined within the scope of the meeting were discussed and suggestions for solutions were presented. In this context, it was pointed out that an agreement should be signed to harmonize customs legislation and practices and to reduce tolls to a competitive level. Apart from this, attention was drawn to the fire disasters that took place last summer and development of cooperation in the fight against natural disasters was mentioned. Joint struggle against terror organizations and combating Islamophobia and xenophobia were also important items on the agenda in the meeting.[3]

One of the important things at the summit was the renaming Turkic Council as “the Organization of Turkic States”. The Turkic World 2040 Vision began to be implemented so that this change does not remain in words only and transforms into practice. In this context, steps were taken to develop cooperation mechanisms to bring together the experiences of the Turkic states to raise their political, economic, social, and cultural standards and to provide the necessary resources when needed. In this process, it was stated that the Organization will support a culture of multilateral cooperation that also supports international law.[4]

The Hungarian Prime Minister, who attended the meeting to represent Hungary that was accepted as an observer member at the 6th Summit of the Turkic Council held in 2018, said that Hungary would make every effort to protect the interests of the Turkic people within the European Union. The Prime Minister stated that the strategic partnership with Turkey, as well as with Uzbekistan and Kyrgyzstan, is gradually developing on the way to improve relations with Asia.[5] Meanwhile, Turkmenistan became an observer member following the 8th Summit, which it attended for the first time. It is of great importance that Turkmenistan, which follows a traditional policy of neutrality, has joined the Organization of Turkic States with the status of an observer member, which will further strengthen the organization with its increasing number of international partners. After Turkmenistan’s observer status, an important step has been taken for the development of solidarity and cooperation between the Turkic States and their peoples. As for Uzbekistan, it had become a full member of the Council at the 7th Summit held in Baku in 2019.[6] With the inclusion of Turkmenistan in the enlargement process that started with Hungary and Uzbekistan before, expectations were expressed regarding the membership of the Turkish Republic of Northern Cyprus in the Organization of Turkic States. Therefore, it is seen that the scope of the Organization of Turkic States will gradually expand.

The Organization of Turkic States is an important actor for the realization of the goals of cooperation in the fields of economy, energy, and logistics included in the Turkic World 2040 Vision. Serious development will be achieved if the planned future perspectives on political and economic cooperation in the regional and international arena can be put into practice. The summit held in Istanbul was a promising development to further strengthen the efficient cooperation to make the sphere of the Turkic world reach to the Trans-Atlantic from beyond the Silk Road. In the future, it is expected that the Organization of Turkic States will expand further and its activity areas and intensity will increase.