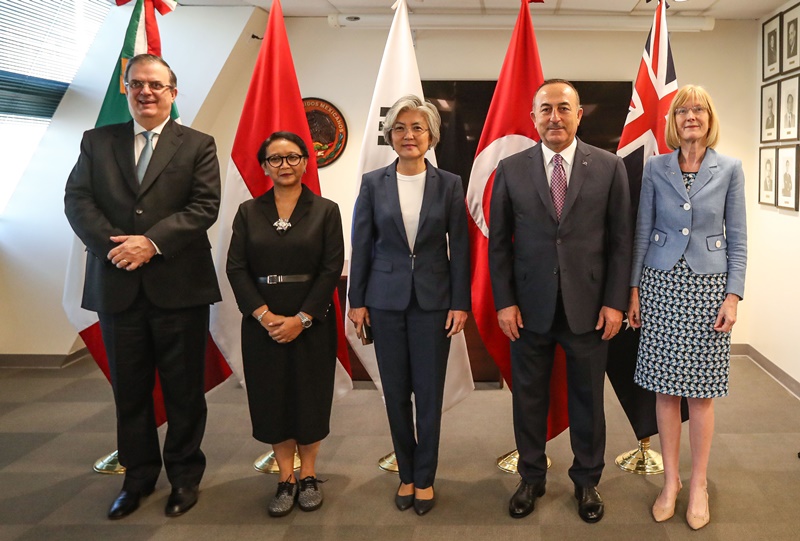 Within our globalizing world, the increasing economic, and political ties between countries also leads to an increase in their level of cooperation. The Group of Twenty (G20) is one of the important examples of such cooperation. G20, consisting of 19 countries[1] and the European Union, is a global forum designed to bring together industrialized and developing economies to discuss international economic issues. The G20 was established in 1999, in line with the initiative of the finance ministers and central bank governors of G7. The regional and geographical locations of the countries were taken into account while choosing the members of the G20. Therefore, the G7 countries[2], seeing that a monopolistic approach was no longer possible in a globalizing world, led to the formation of the G20.[3] Despite the formation of the G20, the main criticism against the 7 industrialized countries that come together every year under the G7 to discuss mutual interests is that this organization does not reflect the current state of global politics and economy. Despite being represented in the G20 group, this situation has pushed rapidly growing and developing economies such as India and Brazil, which are not members of the G7, to establish their own communities to shield themselves from the decisions taken in line with the interests of only 7 countries.[4]

Following the 2008 Global Financial Crisis, as the effects of the crisis diminished, the share of developing countries in global production and their impact on the global economy began to increase. In this context, these countries have created structures such as BRICS in response to having been left on the sidelines due to the status quo attitude maintained by developed countries in platforms such as the G20.[5] BRICS, which aims to achieve a fairer international management within a multilateral system that is currently controlled by European countries and the US, consists of Brazil, Russia, India, China, and South Africa, which are among the most important economies in the world.[6] At the same time, the main common features of these G20 countries are the rapid growth and high dynamism of their economies and their increasing population. In such formations, members act in solidarity in certain economic and political decisions over mutual interests and common threats.[7]

Turkey is an important member of the G20 due to its economy and its strategic location that connects European and Asian continents in geographic, economic, and cultural terms. Experts evaluate that Turkey’s importance in G20 will increase even more in the following period. The G20 membership of Turkey allows it to closely follow global economic developments. This membership also has an important attribute in terms of allowing Turkey to express its problems in the international arena. The annual summit of the G20 thus offers an excellent opportunity for Turkey to strengthen its international position. Turkey is accepted as a significant global player, especially in energy security and Middle East peace, also plays a constructive role in areas such as global financial stability. Turkey will be a party to agreements with the G20 countries especially in matters concerning its national interests. It will also be effective in seeking solutions to urgent global problems with some members of the G20 by participating in coordinated coalitions.[8]

To increase its maneuverability in the G20, Turkey has participated in an initiative that hosts five countries of G20. MIKTA was established in 2013 by the emerging economies of Mexico, Indonesia, South Korea, Turkey, and Australia. MIKTA appears as a platform that is less on the agenda when compared to G20, G7, and BRICS.[9] Nevertheless, it is possible to say that the establishment of MIKTA has increased the effectiveness and prestige of its five members in the G20. After MIKTA, these five countries have been more involved in the decision-making process regarding global financial management within the G20 and had the chance to participate more actively in global governance. Another important benefit of MIKTA for its members is that it facilitates the efforts of five countries, each with a different socio-economic background and geographical diversity, to focus on creating a common agenda.[10] Therefore, it can be said that MIKTA has a unique cross-regional feature and potential. All the member countries appear as actors that are becoming active beyond their own immediate neighborhood. Cooperation in development is one of the important areas in which MIKTA has a lot of potential. The combination of well-established and emerging development providers (North-South and South-South cooperation models) in a small community format is a unique advantage. Therefore, MIKTA has the potential to clarify the global development agenda.[11]

Like G7 and BRICS, MIKTA approaches global economic problems from its own point of view and has emerged with the claim of being an important power in the multipolar world order. The common point of such formations is that they have stances that challenges the global financial and economic system. These communities, which are formed by countries that aim to gain power in the face of political and economic interventions by the US and the EU, emphasize more cooperation and argue that they can affect the changes in the international system more when acting as a group.[12] The success of MIKTA in this regard is a matter of debate. The activities of MIKTA cover a wide range of topics from sustainable development to terrorism, from North Korea to civil emergencies and from migration to the economy. According to some opinions, the sheer variety of these issues make it difficult to define MIKTA’s purpose. Additionally, Covid-19 has tightened foreign ministry budgets around the world. As a result, the capacity of MIKTA, like the G7 and BRICS, to support multiple programs has come under increasing pressure and it has become difficult to compete against several other initiatives. Medium-sized power initiatives such as MIKTA may lose their effectiveness if they fail to achieve sufficient success. About eight years after its establishment, it remains to be seen how MIKTA will be able to overcome these risks amidst the negative effects of Covid-19.[13]

[8] Colin I. Bradford & Jonannes F. Linn, “The G20 Summit - Its Significance for World and for Turkey”, International Economic Issues, p. 63. Available at: https://dergipark.org.tr/tr/download/article-file/646919

[13]  Jeffrey Robertson, “Where next for MIKTA?”, The Interpreter, August 26, 2020, https://www.lowyinstitute.org/the-interpreter/where-next-mikta