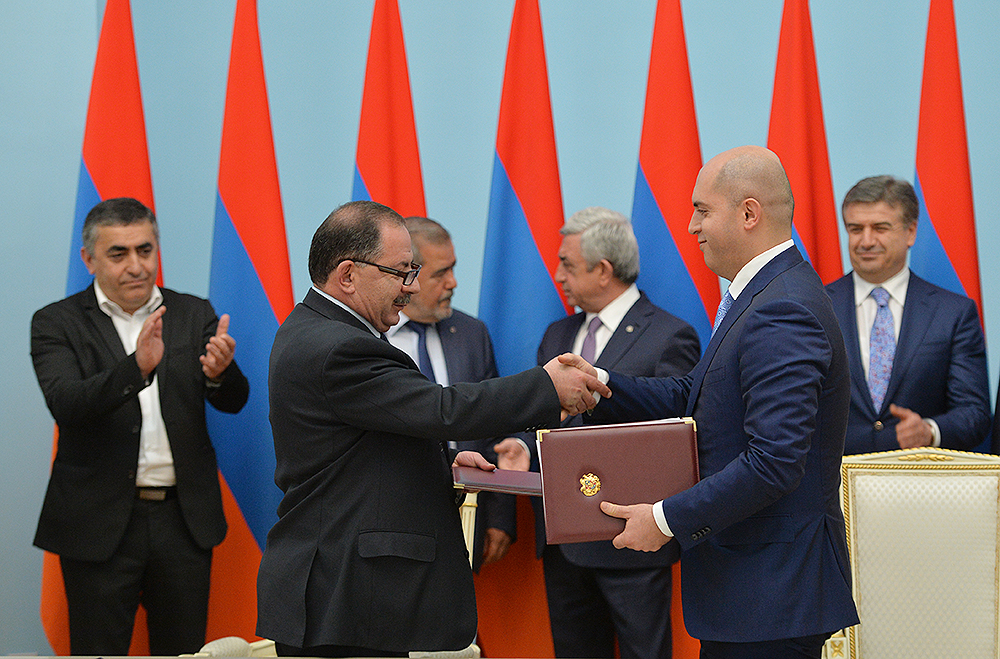 Cooperation between the RPA and the ARF is not a new phenomenon. On the contrary, these two political parties had been in cooperation between 1998-1999 and 2009. This cooperation was reinstalled in February 2016. As such, the signing of this memorandum meant the renewal of the ongoing alliance between these two parties. In addition to that, the recent memorandum indicates that the RPA-ARF coalition will be the main force behind the establishment of the parliamentary system in Armenia as implied in Article 3.7.1 and elsewhere in the text of the memorandum.[2] In other words, these two parties will be main actors in this constituent process.

The RPA won the 2 April 2017 parliamentary elections with 49.17% of the votes that earned it 58 of the 105 seats in the parliament (55% of the seats). This enables the RPA to form the government without forming coalitions. On the other hand, legislative rules in Armenia require three-fifths majority in the parliament for the appointments of high-ranking state employees such as constitutional court judges, the general prosecutor, election officials, and chairmen of the appeals court and the central bank. Likewise, to pass laws such as the electoral and judicial codes, laws on holding referendums, and legislation related to the Constitutional Court, three-fifths majority in the parliament is also needed.[3] RPA-ARF coalition provides this critical majority.

With the parliamentary system being put into effect, the executive power in Armenia will in practice belong to the prime minister. According to the memorandum, the RPA will “have the right to nominate Prime Minister of the Republic of Armenia.”  This means that the RPA will be the major power holder in the country. Other political posts will be assigned according to the “agreements reached through the consultations” between the RPA and the ARF.[4] Currently, the ARF holds the ministries of education, local environment and environment. It would not be surprising if these ministries are given to the ARF in the new government.

Surely, in addition to the composition of the new government and other things including the success of the RPA-ARF coalition in transforming Armenia from a semi-presidential to parliamentary republic will be seen in time. Yet, from today, we can -and should- point out some important implications of the renewed RPA-ARF coalition.

The RPA-ARF coalition that began in 1998-1999 following the 1998 presidential elections marked and shaped a major ideological and political turning point in Armenia. Whereas, between 1991 and 1998, there were radical ideological and political differences between President Levon Ter Petrosyan and the ARF, which resulted in a fierce conflict between the two that even resulted in the ban of the ARF in Armenia for its alleged terrorist and other illegal activities, Robert Kocharyan of the RPA, who came to power in 1998, chose cooperation instead of confrontation with the ARF. For example, one of the first acts of Kocharyan was to re-legalize ARF and appoint some ARF members to high-ranking state posts. This was the very moment of a new conduct between Armenia and the Armenian diaspora; from then on, an ideological and political convergence began to flourish between the two, particularly with respect to the relations with Turkey and Azerbaijan, the approach to the 1915 events, and the Karabakh conflict.[5]

Two main reasons behind this cooperation can be detected. First, Kocharyan believed that he could benefit from the economic and political strength of the Armenian diaspora established in many countries including the globally influential ones such as the USA and France. Kocharyan hoped that the diaspora could use its lobbying power for the benefit of Armenia in these countries and international platforms. As to the ARF, alliance with the ruling party in Armenia was the only way to have a voice in the Armenian politics given its low vote percentages in the Armenian elections, notwithstanding its hegemony in the ideological and cultural spheres. Obviously the same ideological fundamentals of the RPA and the ARF that rests on Armenian nationalism helped this convergence.

It can be seen that these reasons are still valid with respect to the recently renewed coalition between the RPA and the ARF; practical concerns and ideological affinity form the basis of the current RPA-ARF alliance.

The 905 word-long memorandum outlines the “strategic objectives of cooperation,” “priorities of the political coalition,” and the “mode of political coalition’s work and formation.”[6] While the memorandum, to a large extent, is composed of ordinary “politically correct” statements such as the will to improve human rights, rule of law, efficient government, and environmental protection, Articles 1.5 and 2.3 attracts attention, particularly with respect to Armenia’s foreign policy. Article 1.5 mentions “ensur[ing] the common security of the Republic of Armenia and the Republic of Artsakh” as one of the “strategic objectives of cooperation.” Article 2.3 underlines “complet[ing] the nation-army concept” as a priority. These two demonstrates that in the coming days Armenia will not revise its unconstructive approach with respect to the Karabakh conflict. Moreover, the ideological and practical militarization of Armenian society will continue.

In principle, constituent moments and processes like the regime change in Armenia create an expectation for improvements for the better. However, in view of what is mentioned above, it seems that there is little hope for such a progress in Armenia.

[2] See, “Memorandum of Forming Political Coalition between the RPA and ARF was Signed at the Presidential Palace,” President of the Republic of Armenia,  April 11, 2017, accessed May 15, 2017, http://www.president.am/en/press-release/item/2017/05/11/President-Serzh-Sargsyan-Political-Coalition-Signing-Memorandum/

[4] “Memorandum of Forming Political Coalition between the RPA and ARF.”

[5] For the Armenia-Diaspora relations starting from the late 1980’s see, Turgut Kerem Tuncel, Armenian Diaspora: Diaspora, State and the Imagination of the Republic of Armenia (Ankara; Terazi, 2015), 23-80.

[6] “Memorandum of Forming Political Coalition between the RPA and ARF.”