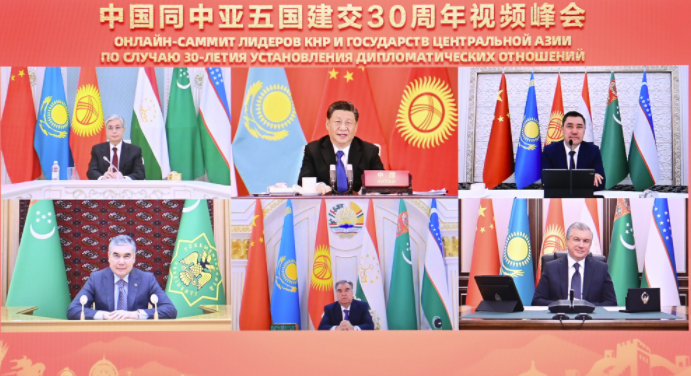 The leaders of Central Asian countries and Chinese President Xi Jinping, who came together at the summit to celebrate the 30th anniversary of the relations established between China and Central Asian countries on 25 January, announced that they would increase their integration in the economic field. Jinping stated that China’s domestic market will become more open to Central Asian goods and agricultural products. This can be seen as a positive development for Central Asian countries whose exporters suffered significant losses because of China’s tightened border regulations due to the Covid-19 pandemic.[1]

One of the most important projects accelerating China’s economic relationship with Central Asian countries is the ones within the scope of the Belt and Road Initiative (BRI), which China first mentioned in 2013. BRI, which is seen as a key in the development of economic relations between China and Central Asia, will facilitate the opening of mutual markets. At the summit on 25 January, drawing attention to BRI, Jinping said that China is seeking to increase the trade turnover between China and the Central Asian region to 70 billion dollars by 2030. Therefore, signals were given that economic relations would continue to increase without slowing down.

Meanwhile, the Beijing Winter Olympics, which was diplomatically boycotted by countries such as the US and the UK, were held between 4-20 February. While diplomatic boycotts marked the Beijing Winter Olympics and there was a noticeable absence of senior leaders due to the pandemic, there was full participation by all five Central Asian leaders. While China’s Xinjiang policies were on the international agenda, the participation of Central Asian leaders was critical for China. From the Chinese point of view, the visit of all Central Asian leaders to Beijing was seen as a powerful way to keep the Uyghur issue regional and to keep away it from all kinds of foreign intervention.[2] In both a regional and international context, the visits of the five Central Asian presidents to China showed that the importance of the relationship is multidimensional.

The ever-developing relations of China and Central Asia are significant for the formation of an environment of regional stability and security, as well as economic relations. The withdrawal of the US from Afghanistan recently created a situation that has disrupted the balance of power in the Central Asian region and has increased the potential risks to the security situation. In addition, situations that threaten security in the region have begun to emerge, including the recent protests and riots in Kazakhstan. In such a case, the effect of China’s role on the economy and welfare in solving security problems is being emphasized by Chinese authorities.[3] On the other hand, Chinese President Jinping stated that efforts are being combined with Central Asian states to combat terrorism, separatism and extremism, transnational organized crime, and drug trafficking, and to resolutely reject foreign interventions or attempts to promote “color revolutions”. The bilateral relationships between China and the Central Asian countries, which are stated to operate with a win-win logic within the mutual trust mechanism, are perceived positively for both parties.

It is emphasized by the parties that there are many areas where China can deepen its cooperation with Kazakhstan, Kyrgyzstan, Tajikistan, Turkmenistan, and Uzbekistan to increase its infrastructure projects, prevent epidemics, and ensure grain security. According to experts, China and Central Asia have had ongoing communication since the ancient Silk Road, and the spirit of dialogue between cultures has been inherited today as both sides respect each other’s culture and development path. In light of all this, the two sides seem to be able to coordinate closely on regional issues, namely the Afghanistan issue and other threats to regional peace and security.