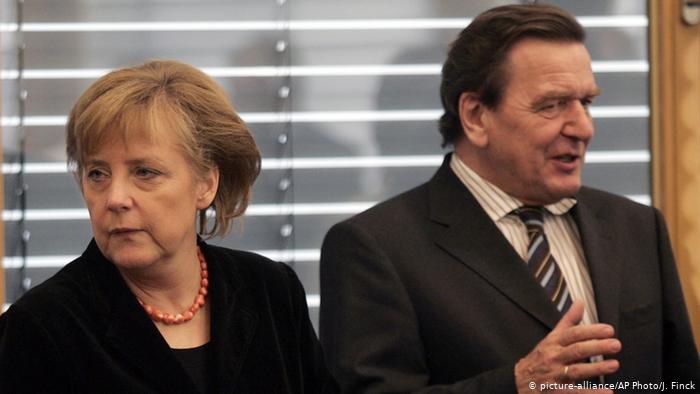 The former chancellor has laid the blame for the current predicament the CDU faces firmly at Merkel's door. Annegret Kramp-Karrenbauer was expected to succeed Merkel but has announced her resignation.

Former German Chancellor Gerhard Schröder criticized Angela Merkel on Tuesday over her decision to remain chancellor after her withdrawal as CDU leader in 2018.

Schröder said Merkel made a "fatal mistake" in doing so, particularly in light of the surprise decision of Annegret Kramp-Karrenbauer to step down from her position as head of the party and to withdraw from running for chancellor in 2021.

He said the subsequent predicament was entirely Merkel's making and Schröder reckoned there was constant confusion during Kramp-Karrenbauer's reign "because you did not really know who had the final say, the chancellor or the chairwoman."

The former German leader recognized the candidacy of North Rhine-Westphalia State Premier Armin Laschet as a good option to succeed Merkel in next year's elections. Laschet, a trained journalist and former European Parliament member, has headed Germany's most populous state since 2017.

The liberal-conservative Catholic who backed Merkel during the 2015 refugee crisis warned the party against taking regressive steps following Kramp-Karrenbauer's announcement. Laschet cautioned his party against thinking backwards and "longing for the good old days," he told the Wednesday edition of the Rheinische Post. For Laschet, being conservative is about "preserving good things and being open to new things."

Laschet kept his cards close to his chest regarding the possibility of becoming chancellor, merely saying: "Nobody knows what the future holds."

After the brief election of a new state premier in Thuringia with votes from the far-right AfD, Laschet offered a stern warning: "We saw for the first time in Thuringia how a state premier was elected to office with the votes of extremists. This situation should never have happened. Extremists must never have any influence on the formation of governments."

Laschet, a trained journalist and former European Parliament member, has headed Germany's most populous state of North Rhine-Westphalia since 2017. The liberal-conservative Catholic is a Merkel supporter — and backed her in the 2015 refugee crisis. He is known for being able to work with both the FDP and Green Party, which may be the most likely coalition setup in the next government in Berlin.

As the leading candidates to replace Merkel jostle for positions, Christian Social Union chief Markus Söder cautioned the sister party, the CDU, against a "total break with the Merkel era. That would be wrong," he told Wednesday's edition of the Frankfurter Allgemeine Zeitung.

Söder also disagreed with Kramp-Karrenbauer's request that the CDU presidency should decide on the Union's candidacy for chancellor.