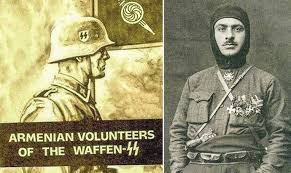 Garegin Nejdeh (also transliterated as Nzhdeh or Njdeh), born in 1886 and deceased in 1955, was a leader of the Armenian Revolutionary Federation (ARF), a party established in 1890. He led an Armenian volunteers unit for Bulgaria during the Balkan wars of 1912-1913—namely when the Bulgarian forces, including the foreign volunteers, practiced ethnic cleansing against the Turks, Pomaks and Greeks[1]—then another volunteers unit for the Russian army during the First World War. The Armenian volunteers, according the Russian sources themselves (including martial court verdicts) committed a long series of massacres, rapes and plunder, as early as November 1914.[2] From 1918 to 1921, Nejdeh was an officer of the Republic of Armenia and, at the end, of the de facto Republic maintained in the eastern part of this country by the ARF until the final victory of the Soviets in 1921. One more time, Nejdeh was one of the officers who commanded forces practicing ethnic cleansing.[3]

In 1933, at the request of the ARF, Nejdeh established the party’s youth organization in North America. The name, until 1943, was Tzgeghagron, which literally means in Armenian: “The religion of race.” It can be translated into “The Union of the Race’s worshippers.” Then, it became the Armenian Youth Federation (AYF), which still exists in 2019 (in the U.S., Canada and Australia). The Tzghagron’s doctrine was (and remains) based on Aryanist racism. In Hairenik (Boston) dated 27 September 1933, Nejdeh explained:

“The Racial-Religious believes in his racial blood as a deity. Race above everything and before everything. Race comes first. Everything for the race.... We hear the Racial Religious Orders have their own general creed, their leadership and political emblem. They are also going to have their own uniforms, their own hymn, their rites, their holidays.”

“I am preaching to you the Tzeghagron Creed, worship of the race […] To me the highest act of individualism and of freedom is to follow the voice of my race. I am a Tzeghagron. That means: I know my race. I believe in my race. I worship my race. I know that ray race is great; that my race has given more to humanity than it has received from it. I am a believer in my race and, behold, I worship another deity, the blood of my race, in whose unspotted purity lies the future of our people. […] The Deification of the will of the Race—that is what the Tzeghagron is fighting for.”

In case the Nazi orientation was not clear for everybody, Nejdeh explained (Hairenik Weekly, 10 April 1936): “Today Germany and Italy are strong, because as a nation they live and breathe in the terms of race.”[4] So, there is no ambiguity about the meaning of “race” for Nejdeh and his followers: It is the same then for Hitler. This was not something really new for the ARF, converted to Aryanist racism well before 1933 and even before the First World War.[5]

Back to Europe at the beginning of WWII, Nejdeh was a member—together with two other leaders of the ARF, Ardaches Apeghian and Vahan Papazian—of the National Armenian Council established in 1942 under the auspices of Alfred Rosenberg, the Third Reich’s minister for the occupied eastern territories. One of the main aims of the council was to recruit volunteers for the Wehrmacht and the Waffen-SS.[6] Arrested by the Soviets in 1944, Nejdeh was sentenced to 25 years of hard labor and died in a gulag in 1955.

Certainly, Nejdeh was not the only Nazi collaborator; but he was one of the most involved in building a Nazi doctrine for non-Germans and, more important, he is the only one (with Drastamat “Dro” Kanayan, main leader of the ARF from 1923 to 1956 and officer of the Wehrmacht) to be celebrated today as a national hero by state institutions. As early as 1991, the “moderate” President Levon Ter-Petrossian gave his name to the second biggest square of Yerevan and to the metro station located below. The Republican Party of Armenia, in power from 1998 to 2018, claimed Nejdeh as his unique ideological reference. During his first months in power, Nikol Pashinyan did not discuss the subject that much. However, in October 2019, he was forced to react when Azerbaijani President Ilham Aliyev stated to him that Armenia is glorifying Nazi collaborators such as Nejdeh. Mr. Pashinyan’s reaction was the contrary of a self-criticism:

“Yet the truth is that Karekin Njdeh fought against Turkish occupation of Armenia, against the genocide of Armenians and […] also commanded, together with many Russian officers, a very important section of the frontline during the Armenian-Turkish war in 1918.

As Mr. Pashinyan merely was a journalist two years ago, and became the Prime Minister mainly thanks to the unpopularity of the Republican Party of Armenia, he could have dismissed the acts of the previous cabinets easily. It would have been even more logical as Nejdeh’s interpretation of Nazism was made the state ideology of the period 1998-2018, the books of this Nazi collaborator being reprinted at the expense of the state, to “educate” the new generations. It provoked a series of reactions, including by the author of these lines. Indeed, in 2014, I co-authored an op-ed in the Israeli daily Haaretz,[8] which was summarized in French on the website of the Parisian weekly Courrier international and which displeased the Armenian government of the time a lot. In 2016, The Jerusalem Post echoed the protests against the erection of the second statue of Nejdeh in Yerevan[9] and in 2017 it was the Russian government himself who protested, in vain.[10]

As a result, if Mr. Pashinyan, a professional of communication, fully aware of the bad advertisement his statement can cause to him and the country he rules, affirms that the statues of Nejdeh will remain in Yerevan and that there is nothing wrong in that, it is because he thinks Nejdeh’s ideas are fine.[*]

[4] These three quotations are in [Arthur Derounian], “John T. Flynn and the Dashnags,” The Propaganda Battlefront, 31 May 1944, http://jfk.hood.edu/Collection/Weisberg%20Subject%20Index%20Files/F%20Disk/Friends%20Of%20Democracy/Item%2006.pdf

[*] For additonal reading on the state and public support given to extremism in Armenia, please see: Mehmet Oğuzhan Tulun, "Armenia And The Veneration Of Terrorists – II," Center for Eurasian Studies (AVİM), Analysis No: 2019/21, September 16, 2019, https://avim.org.tr/en/Analiz/ARMENIA-AND-THE-VENERATION-OF-TERRORISTS-II