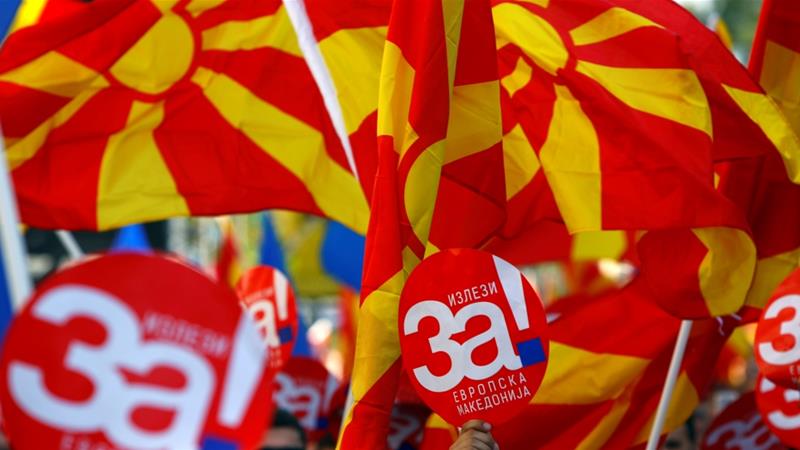 The most talked development in the Balkans in this year was the concrete steps which were taken to solve the name problem between Macedonia and Greece. We have presented a review of the problem in our previous articles. Macedonian Prime Minister Zoran Zaev's “consultation referendum” was held on 30 September. Approximately 1,8 million registered voters in the referendum were expected to respond to the question "Do you agree with the treaty signed by the Republic of Macedonia with Greece and are you for joining the EU and NATO?".[1]

In his statement after the referendum, Zaran Zaev stated that the Macedonian citizens and institutions had spent a "quite" and "democratic" referendum day, that the votes in the referendum were conclusive, and that "the citizens’ will is incontestable, this must be respected".

Zaev made the following statements about the referendum: Today, there was the success of democracy, the success of European Macedonia. The success belongs to our country and all our citizens, the success belongs to all of us". Zaev noted that the majority of the respondents voted for the "European Macedonia". In this consultative referendum, Zaev expressed that the will of the voters should be transformed into political action in the parliament, and that he expected the representatives of the oppositional Internal Macedonian Revolutionary Organization-National Democratic Union of Macedonia (VMRO-DPMNE) to respect the choice of the majority of the voting citizens. Zaev stated "Otherwise, we will have to use other democratic means. That would mean early general elections".[3]  At least two-thirds of parliamentarians in Macedonian Parliament (81 out of 120) should support it in order for the constitutional amendments in the agreement between the two countries to be approved.[4] After the completion of these processes in Macedonia, the agreement must be approved in the Greek parliament.

As it will be recalled, the first call to boycott was by President Gyorge Ivanov, who vetoed the agreement to change Macedonia's name as the 'Republic of Northern Macedonia'.

Addressing the 73rd session of the United Nations General Assembly in New York, Ivanov, in his speech here, had asked his citizens not to go to the polls for the referendum. Ivanov described the change of the name of his country as "historic suicide". Ivanov stated "As a simple citizen, I made up my mind for September 30th. I believe that my citizens will decide in a smart way".[5] Ivanov expressed that he believes the agreement with Greece endangers the state and national identity of Macedonia.

It would be useful to examine the referendum campaigns in order to see the general tension of the country before the referendum and the color of the international public opinion. Prior to the referendum, Macedonian Prime Minister Zoran Zaev and the government coalition launched a campaign for the "Yes" vote in the referendum. During this process, many senior officials and EU leaders expressed their support for "Yes", as it would bring Macedonia closer to the EU and NATO. To support the referendum, German Chancellor Angela Merkel, Austrian Prime Minister Sebastian Kurz, US Secretary of Defense Jim Mattis and NATO Secretary General Jens Stoltenberg were among those visiting the country. All of these senior officials made statements that would encourage the people of Macedonia to vote in favor of the new name. Albanian President Ilir Meta, Prime Minister Edi Rama and Foreign Minister Ditmir Bushati called on the Albanian population to vote yes. Turkey supported the decision of yes in the referendum as it is supportive of Macedonia's NATO and EU membership. The population of Turkish origin living in the region also made statements that they had consensus for the yes vote.

In addition to the names mentioned above, there were also groups calling for a No vote at the referendum or calling for a boycott. Macedonia's main opposition party, VMRO-DPMNE, has threatened to boycott the referendum and stated that they perceive the name change as an act of pro-Greece betrayal. However, in early September, just a few weeks before the referendum, party head Hristijan Mickoski made a statement that encouraged citizens to vote in ways that they think are right for their country's future and respect different views. While the party did not participate in the referendum campaign, various high-ranking party members voiced their support for boycott or yes. In early September, just a week before the referendum, a claim put forward by WikiLeaks stated that the 2008 VMRO-DPMNE government was willing to accept the name of the Republic of Northern Macedonia only for international and bilateral use, provided it includes the recognition of Macedonian. This proposal was rejected by Greece.[6] The information was rejected by a media agency close to the party. On September 23, Macedonian President Gorge Ivanov, who was elected as the candidate of VMRO-DPMNE, vetoed the agreement and called on his countrymen to boycott the vote as mentioned above. Several anti-Western groups with pro-Serbian and pro-Russian tendencies also protested against the change of name[7].

Some diplomats and analysts, including US Defense Secretary Jim Mattis, have accused Russia of running a campaign to undermine the referendum. From the Western perspective, Russia is opposed to any enlargement that broadens NATO or the European Union, as it will weaken Russia's strategic ambitions and the need to reaffirm its influence in the region. According to allegations, thousands of fake Twitter and Facebook accounts called on the Macedonian people to boycott the vote. Some Facebook posts tried to take advantage of the ethnic divisions in the country with propaganda views similar to "Will you let the Albanian people change their name?". In the process, two Russian diplomats who were accused of weakening ties with Macedonia were expelled from Greece.[8]

Despite their low turnout, the Western leaders welcomed the results of the referendum. Commissioner for European Neighborhood and Enlargement Negotiations Johannes Hahn described the “yes” vote at the result of the referendum as “very important” and demanded from Macedonia's political leaders to “respect this decision and take the highest level of responsibility”. NATO Secretary-General Jens Stoltenberg, on his Twitter account, described the referendum as a “historic opportunity” and reaffirmed that “NATO's door is open for Macedonia”.[9] The US also welcomed the results. The Ministry of Foreign Affairs has urged Macedonian lawmakers to "overcome partisan politics and take over this historic opportunity" in the implementation of the Prespa Agreement, which could allow Macedonia to become "fully engaged in Western institutions". The Greek Foreign Ministry welcomed the positive outcome, but described the low vote turnout as "contradictory".[10] Nevertheless, the Greek Prime Minister Alexis Tsipras called his Macedonian counterpart, Zoran Zaev, to congratulate him on the yes rate on the referendum. On the other hand, Russia, which the West defines as a devoted opponent of Macedonia's Euro-Atlantic integration, stated that it could veto the Prespa Agreement between the Republic of Macedonia and Greece by bringing the amendment to the United Nations Security Council. Macedonia rejected Moscow's threats, stating that bilateral agreements could not be linked to the Security Council.[11]

The main point that can be seen when all these developments are examined is: For certain, Macedonia’s recognition by international organizations and, more importantly, its full membership is substantial. However, it is necessary not to set aside the manipulations in the process. An important organization that emphasizes the importance it attaches to democracy like the European Union has virtually considered the boycott of sixty-five percent of the Macedonian people as null and void, and has not hesitated to present the answer of the thirty-five percent to the international public as an absolute success. While the EU, throughout the whole process, has criticized Russia's attempts to sabotage the referendum and its efforts to create public opinion in its favor, it has defined steps such as openly supporting the yes campaign by the West as the expression of the wish  for the better country.

The first example of the habit of ignoring the EU's democratic practices is unfortunately not the Referendum of Macedonia. As it would be remembered, the UN Secretary-General Annan's plan, which provided a peaceful solution to the Cyprus problem, was presented separately to the approval of the Turkish and Greek Cypriots on 24 April 2004, with sixty-five percent of the Turkish Republic of Northern Cyprus saying yes to the plan and seventy-six percent of Southern Cyprus saying no.[12] However, while Southern Cyprus was accepted as a full member of the EU, the Turkish Cypriot side was virtually punished for its peaceful and conciliatory attitude and was left outside the EU. It was soon understood that the various statements by the EU senior officials that the situation would be compensated were empty words. 14 years after the Cyprus referendum, which had great importance for Turkey, this time it is seen in the results of the referendum on Macedonia that nothing is changing in the European Union. International law practices and the concept of democracy are handicapped by double standarts.