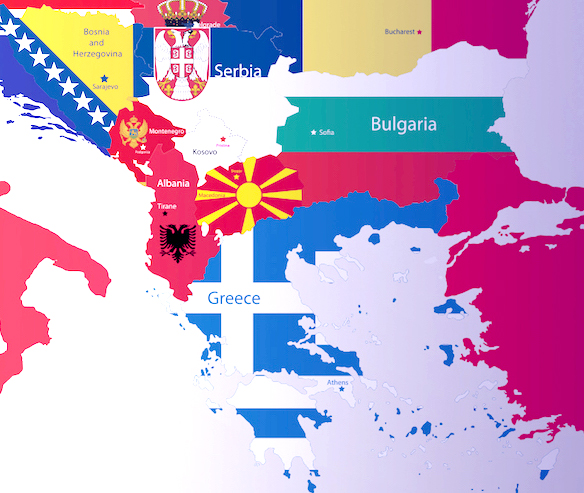 European Union Institute for Security Studies (EUISS) home page describes its publication of Chaillot Papers as  “the Institute's flagship publication written by external experts as well as the Institute’s Senior Analysts, and based on collective work or individual research, they deal with all subjects of current relevance to the Union’s security”.[1] EUISS has published on 3rd September 2018 Chaillot Paper No. 147 titled “Balkan futures- Three Scenarios for 2025”. [2]

As it would be recalled the EU Commission adopted in February 2018 a strategy under the title of “A credible enlargement perspective for an enhanced EU engagement with the Western Balkans”. The strategy considers the enlargement policy “as part and parcel of the larger strategy to strengthen the EU by 2025” set out by President Juncker in his State of the Union speech of September 2017, describing this enlargement as “ investment in the EU's security, economic growth and influence and in its ability to protect its citizen.”.[3]

We understand from its title that said Chaillot Paper No.147 (The Paper)   was prepared to shed light on the possible security situation in the Balkans by 2025 which was defined as a target date for strengthening the EU. Accordingly, at the very beginning of the Paper, in Executive Summary section, it starts with the sentence “What will the Western Balkans look like in 2025?”  Since the main title of the Paper is “Balkans future”, it is natural to expect that first sentence of the Paper supposed to be formulated as “What will be the Balkans look like in 2025”. In order to mitigate this confusion the authors of the Paper in footnote 1 states that “For the purpose of this paper, the Western Balkans consists of Albania, Bosnia and Herzegovina, the former Yugoslav Republic of Macedonia, Montenegro, Kosovo* and Serbia.”

In the Executive Summary section the authors state that “This Chaillot Paper presents three contrasting scenarios for the horizon of 2025 – best-case, medium-case, and worst-case. Each scenario takes account of the impact of underlying megatrends (trends that are unlikely to change by 2025) on the future trajectory of the region: the scenarios do not just spell out what 2025 could look like, they also explain how decisions with far-reaching consequences taken at critical junctures (called game-changers) will shape this future between today and then. They therefore serve not merely as a description, but also as a roadmap outlining the different options available.”[4]

Afterwards, they enlist three scenarios. First one is “The hour of Europe” which is shortly described as “a positive and optimistic vision of the future evolution of the Western Balkans.”[5] Second one bears the title of “The Balkans in limbo”. Per the Paper, in this scenario “Balkan countries are still on the path to EU integration, but are making slow progress in implementing reforms due to a lack of political will”. The third scenario is “The ghosts of the past”. In this scenario, “the Western Balkans are haunted by the ‘ghosts of the past’. The EU integration process has slowly slipped off the political agenda, while geopolitics and violent conflicts are resurgent.”[6]

As it can be easily noticed, while the first and third scenarios refer to the region as “Western Balkans”, second one bears the title “The Balkans in limbo”.  It is significant that the authors and editors use the terms “Western Balkans” and “Balkans” arbitrarily as they deem it appropriate to their purposes. In the third doomy scenario, the authors say that “The redrawing of borders in the Balkans has not taken place without bloodshed”. Those who are familiar with the Balkans know that the region has its own peculiarities, historic facts and cultural roots.

We, as the Center for Eurasian Studies (AVİM), for long have been drawing the attention to the historic and geographic integrity of the Balkans. We are talking about a region of which its name is actually Turkish. According to Encyclopedia Britannica the word Balkan is Turkish and means mountain.[7] When one refers to Balkans, historically it comes to mind a region in which at the eastern end Turkey, Bulgaria and Romania, and at the south Greece are located. The central part of Balkans is comprised of some of the successor states of former Yugoslavia (Serbia. Bosnia-Herzegovina, Macedonia, Montenegro, Kosovo) and Albania. Despite this geographical definition of the region, in the context of EU expansion a new terminology with the name of “Western Balkans “has been developed since early 1990s.[8]

According to the EU; Croatia, Bulgaria, Romania, and Greece, since they are members of the EU, are not part of the Balkans anymore. On the other hand, Bosnia-Herzegovina, Serbia, Montenegro, Kosovo, Albania, and Macedonia comprise the so-called "Western Balkans" sub-region.  Turkey, by its lonesome self, makes up the other unmentioned part of the Balkans which supposed to form the "Eastern Balkans".[9] We, in number of our analysis, have repeatedly stressed that this artificial division of the Balkans, undermining its integrity, overlooking historical realities, creating new sub-regions with new names served the purpose of excluding a certain country which is Turkey from the Balkans, hence Europe. As it was mentioned in one of the AVİM analysis on the subject “Turkey’s European identity converges with the other regions of the Europe, especially with the Western and Northern Europe, through Balkans.” [10]In the light of all these, we have asserted for long that the name “Western Balkans” is a misnomer. We have also stressed that the EU’s proposed strategy for the “Western Balkans” is a misdesign on the basis of this misnomer. In fact, Chaillot Paper No. 147 reflects the artificiality of the arbitrary division of the Balkans.

The Paper, in “Game-changers for the region” section (chapter 2) describes the game-changers as “event or set of circumstances that exerts a decisive influence on the future, requiring a decision to be made, which can have differing consequences depending on what choice is taken” and enlists the game- changers as questions. One of the mentioned game-changer is “Disruptive external actors”. The Paper explains this game-changer as follows:

“Several other external actors are actively working against the goal of liberal reform in the region. Will the Western Balkan states be able to mitigate these potentially disruptive inﬂuences, represented mainly by Russia, China, Turkey, and the Gulf States?”[11]

It is, to say the least, quiet hair raising to see such a blatant accusation against Turkey in a paper prepared under the responsibility of one of the institutions of the EU dealing with the security studies. The Paper tries to explain the unconvincing reasons of this blatant accusation with the following strange sentences:

“Ever since the Justice and Development Party (AKP) came to power in Turkey, it has intensified its presence in the region through a range of economic and diplomatic initiatives. Ahmet Davutoğlu, former Turkish minister of foreign affairs, points out in his book Strategic Depth that Turkey is positioned at the centre of a number of important ‘geo-cultural basins’, including the West, the Middle East, the Balkans and Central Asia, and should therefore strive to pursue a dynamic and proactive foreign policy within each of these regions. In line with this reasoning, Turkey initiated a trilateral meeting framework between Bosnia and Herzegovina, Serbia and Turkey on the one hand, and Bosnia and Herzegovina, Croatia and Turkey, on the other. Furthermore, it lobbied NATO to grant Bosnia and Herzegovina admission to the Alliance’s Membership Action Plan in April 2010, is a strong supporter of Kosovo’s independence, and has encouraged NATO to invite the former Yugoslav Republic of Macedonia to join the alliance even without having the ‘name issue’ with Greece resolved. Moreover, Turkey has successfully positioned itself as a rising soft power in the region, as attested by the fact that citizens in many Western Balkan countries, such as Kosovo, Albania, the former Yugoslav Republic of Macedonia, and Montenegro, have very positive attitudes towards Turkey, while even in Serbia, young people (aged 15-25) perceive Turkey as ‘friendlier’ than their older compatriots.”[12]

The Paper, then asks the following question:  “Will Western Balkan states be able to mitigate the potentially disruptive influences of these actors?  It includes also an assessment that “NATO is seen as the main security provider by the governments and civil society organizations in the Western Balkans.” [13]

According to the above paraphrased quite unprofessional assessment, asking the membership for Bosnia-Herzegovina in NATO as one of the oldest member of the Alliance in the Balkans (Turkey is a member of NATO since 1952); being a strong supporter of  Kosovo’s independence; encouraging NATO to invite Macedonia to join the Alliance; initiating trilateral meetings between Bosnia-Herzegovina, Serbia, Croatia and Turkey; having a very positive attitude towards Turkey among the citizens of the “Western Balkans”, and being respected by the young Serbian people are the reasons for considering Turkey as the “disruptive external actor” for the “Western Balkans”. Per this assessment, Turkey is encouraging the countries of the”Western Balkans” to join the one of the most respected organization (NATO) in the region as a “disruptive external actor.”

It is very deplorable to read such an unprofessional assessment in the flag publication of the European Union Institute for Security Studies. Chaillot Paper No. 147 titled “Balkan futures- Three Scenarios for 2025”, like the other issues of the publication, contains a disclaimer that “The views expressed in this Chaillot Paper are solely those of the authors and do not necessarily reflect the views of the Institute or of the European Union”. Nevertheless, the editors of the Paper are the staff of the EUISS. It would have been expected more diligent attention to the unfounded accusations directed against a country like Turkey which is firstly a centuries old Balkan country, secondly an associate member of the EU since 1964 and lastly a NATO member since 1952. In this respect, EUISS owes a correction for naming Turkey as one of the “Disruptive external actors” of the Balkans. This is an extremely unfair characterization that the Turkish public opinion would unwaveringly reject even before the officials of Turkey.