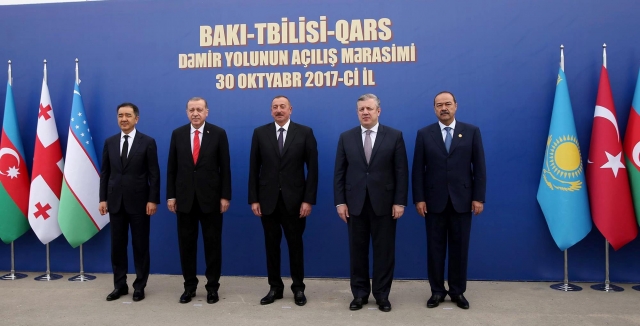 The opening ceremony of the Baku-Tbilisi-Kars railway took place on October 30, in Azerbaijan, with the participation of President of Turkey Recep Tayyip Erdoğan, President of Azerbaijan İlham Aliyev, Prime Minister of Kazakhstan Bakytzhan Sagintayev, Prime Minister of Georgia Giorgi Kvirikashvili and Prime Minister of Uzbekistan Abdullah Aripov. The Baku-Tbilisi-Kars (BTK) railway will connect Turkey, Georgia, Azerbaijan and Kazakhstan via both the BTK railway proper and ferry services in both directions from the Alat port of Azerbaijan and to the Aktau port of Kazakhstan and Turkmenbashi port of Turkmenistan, over the Caspian Sea.[1] The fact that the long awaited project has the potential to connect not only 5 countries, but also Uzbekistan, and even China with Europe in the long term underlines its significance.

By 2034, the line is expected to carry 3 million passengers and 17 million tons of cargo.[2] With its unique location, as being at the heart of regional connectivity and integration projects, the project will complement the other regional initiatives aimed at building corridors between Europe and Asia. For instance, the Transport Corridor Europe-Caucasus-Asia (TRACECA) which was initiated by European Union in the early 90s following the dissolution of the Soviet Union has been active yet not influential due to lack of sufficient financial support, the North-South Transport Corridor (NSTC) initiated by Iran, Russia and India in the early 2000s has not been active due to the economic sanctions imposed on Iran and lastly, the Economic Belt initiative led by China (formerly called One Belt One Road, OBOR) was welcomed by many countries along the historical Silk Road with enthusiasm, yet it is lacking a concrete action plan and a framework which could be agreed to by all the countries involved. However, the Economic Belt is nevertheless an ongoing process with prospects of success.

BTK has the potential to offer a fast, secure and relatively cheap transportation and freight options to all abovementioned projects or initiatives (TRACECA, NSTC and OBOR) and also offer access to the markets of the BTK parties. Prime Minister of Georgia Giorgi Kvirikashvili stated that, “our countries’ geopolitical location gives us a unique opportunity to bridge Europe and Asia. I am sure the railway will create totally new economic opportunities and new conditions for development for the region and beyond,” in order to underline the impact of BTK from not only a regional but also a wider perspective.[3]

Most importantly, the BTK will be the vital link in the chain of the Center (or Middle) Corridor of the Economic Belt initiative, although the costs of the construction of the railway were met by only Azerbaijan and Turkey. Neither western investment banks such as World Bank, the European Bank for Reconstruction and Development nor Asian Development Bank (ADB) or any China-led eastern institutions such as The Asian Infrastructure Investment Bank (AIIB) supported the construction of the Baku-Tbilisi-Kars railway. Argument of the western investment banks was that it would be a better option to “rebuilding the old route through Armenia”[4]. However, that route was shut down with the occupation of Nagorno-Karabakh[5] and seven surrounding districts and out of use since then. On the other hand, such an option would cost a dark political cloud for parties to find a solution to the Nagorno-Karabakh conflict. It would encourage Armenia’s occupation policy and constitute an indecent message about respecting the territorial integrity of Azerbaijan.

The BTK reduces the distance between Europe and China to 14 days and passes through the Caspian-Black Sea route in less than 24 hours. In addition, because of the construction and trade hubs established along the railway it will increase the welfare of the regions it passes through via reviving trade and tourism, thus providing job opportunities to the locals. The BTK parties which will be connected with Center Corridor consists of countries with rich energy resources and a combined population exceeding 100 million which possess open market economies and are already enjoying the fruits of Foreign Direct Investments in their countries. Therefore, BTK will further encourage regional cooperation in the economic field and people-to-people contact. In that sense, besides its geopolitical value, what it offers are in line with the overall vision of the Economic Belt initiative led by China.[6]

In addition, Uzbekistan is expected to be connected with BTK. Participation of the Prime Minister of Uzbekistan Abdullah Aripov in the opening ceremony of the BTK in Baku signals the interest of the Uzbekistan in the project. Uzbekistan adopted a more active foreign policy in the last year and Uzbek leaders are keen to work on regional cooperation in Central Asia and beyond. Uzbekistan is a double land-locked country lacking direct connections to neighboring countries and a lack of access to the sea. In the last couple of years, China has been investing in Uzbekistan’s infrastructure and transportation projects. The BTK will further complement the efforts aimed at overcoming Uzbekistan’s transportation challenges.

According to many experts, Central Asia is considered to be one of the least integrated regions in the world. The region’s aging infrastructure has negative impact on various sectors including transportation and on security difficulties. This depravation leads to even further isolation. Therefore, improving the current state of railways and highways will revitalize regional cooperation, regional trade and bilateral relations, and connect both east and west through various transportation corridors. Indirectly, as countries will be more connected with the international community and each other, connectivity will also promote stability. In that sense, BTK’s and Turkey’s role, as the country positioned at the most western point of the Baku-Tbilisi-Kars railway, straddling the two continents, are vital in terms of the integration of the Central Asian countries with the international community and strengthening regional connectivity.

[1] The legal status of the Caspian Sea or Caspian Lake has not been determined. However, in this text author prefers to refer Caspian Sea/Lake as Sea.

[6] For more information about the Vision and Actions of the Economic Belt initiative please visit the official web page of the MFA of China: http://www.fmprc.gov.cn/mfa_eng/zxxx_662805/t1249618.shtml