THE STATEMENT OF ARMENIAN NATIONALISTS AND THEIR SUPPORTERS PUBLISHED IN THE FRENCH NEWSPAPER LIBERATION
Commentary No : 2017 / 78
AVİM
23.10.2017
4 min read 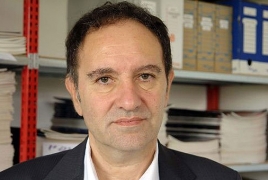 The hearings of two lawsuits regarding militant Armenian nationalists were held on October 17 in Paris and Nanterre. Upon AVIM’s scholar in residence Maxime Gauin’s request, Ara Toranian and Sam Tilbian appeared in court at the lawsuit in Paris. For the second lawsuit, two militants were put on trial for throwing colored water at the Turkish Ambassador who was giving a conference at the Paris-Descartes University on March 2015 and for publishing this attack through social media. Armenian nationalists and their supporters have begun a campaign to create distortions during the course of these lawsuits. This attempt shows how the discussions regarding the 1915 events are being used for settling political scores when instead they should be progressing on a historical basis. The Liberation newspaper in France became a part of this campaign by publishing a statement. We are sharing with you the English translation of this statement below:

THE ARMENIAN GENOCIDE: NO TO THE INSTRUMENTALIZATION OF JUSTICE [FOR ILL-INTENT]

The editor of "Armenia News" [Fr. “Nouvelles d’Arménie”] will appear in court on October 17th: Current French law does not allow for the denialists of the Armenian genocide to stand trial.

As Elie Wiesel has written: “A murderer always kills twice, the second time with silence”: denial perpetuates the genocide.

Even though every genocide has its own distinct features, denialism always uses the same vengeful mechanism. At every turn, denialism represents the same insult to the victims’ memory, the same provocation to the survivors and their grandchildren, the same injury to human dignity.

Thus, the editor of "Armenia News" Ara Toranian is comparing a denialist with another denialist, Shoah Robert Faurisson, like Pierre Vidal-Naquet has done before him. He had many valid reasons.

This lawsuit meant for slander to be held on October 17 at the Paris Criminal Court is unacceptable for us.

While it should be the denialists on the chair of the accused, on the contrary, the people who are defending historical facts, honor, and memory will be put on trial.

French laws still do not allow for the Armenian genocide denialists to brought before justice. Additionally, must the denialists have the grandchildren of the victims be condemned while they [the denialists] are parrying the classification they deserve? This crude attempt to reverse the roles and to instrumentalize freedom of speech should be strongly condemned.

Protecting freedom of speech against those who would use it for malicious purposes, protecting the victims’ heirs from the persecution of the executioners’ grandchildren, not obstructing the transfer of the knowledge of historical facts; these are the main and symbolic aims of the trial that will begin on October 17.

We trust that justice of our country is at this level.