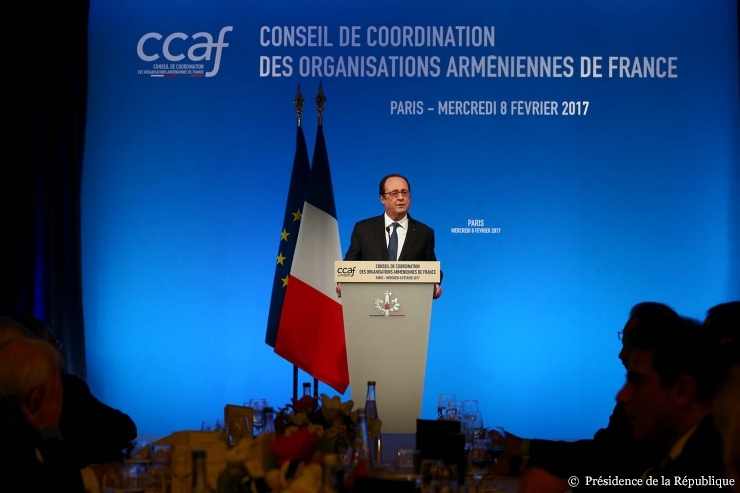 For the final time in the capacity of the President of France, on 8 February 2017, French President Francois Hollande attended the annual dinner of the Coordination Council of Armenian Organizations of France (Conseil de Coordination des Organisations Arméniennes de France – CCAF). During his speech, which was full of clichés of the Armenian narrative,[1] reminding his long-standing commitment to a law to criminalize the "denial” of the Armenian genocide allegations, President Hollande mentioned his efforts and initiatives to this end.

Beginning from the time he was an MP, President Hollande reminded that in 2006, a bill that would criminalize the denial of the Armenian genocide allegations was drafted by the Socialist Party, of which he was the leader at the time (in 2011, this bill was rejected by the Upper House of the French Parliament (Senate)). He also stated that he had supported the Boyer Bill that criminalized the rejection of the “Armenian genocide”, which was annulled by the French Constitutional Council in 2012. Later mentioning his efforts during his presidency, President Hollande touched upon to the fact that France intervened in the Perinçek v. Switzerland case as a third party to support Switzerland in hope of a decision by the ECtHR that would allow for the criminalization of the denial of the Armenian genocide allegations. However, this attempt had also resulted in failure as the ECtHR ruled that the disputes over the nature of 1915 events is a matter of public concern and a person has the right the reject the Armenians’ claims of genocide.[2]

As a result, it was decided to make an amendment on the Law on Equality and Citizenship to include a provision that criminalized the denial, minimization or trivialization of war crimes, crimes against humanity, and genocides if it incites racial, ethnic, national or religious hatred or violence. The amendment aimed to render possible the criminalization of the rejection of Armenian genocide allegations without making direct references to the events of 1915, but by allowing punishment for the “denial” of events that were recognized as genocide by France (in 2001, the events of 1915 was recognized as “genocide” by the French Parliament).

On 22 December 2016, the above-mentioned amendment was adopted by the French Parliament. However, on 26 January 2017, the amendment was annulled by the Constitutional Council of France on the grounds that it was a disproportionate attack against freedom of speech. Furthermore, finding it unnecessary given the existing laws on incitement to hatred, the Constitutional Council also concluded that the amendment may also lead to wrongful penalization with regard to events that are subject of historical debates and haven’t been characterized as a crime by a competent court (e.g. the events of 1915). Thus, in President Holland’s words, caused a “terrible defeat” for France and for the “Armenian cause”.

In his speech, President Hollande, reminding that the Constitutional Council’s decisions are binding, stated that in the absence of a competent court decision declaring an event as genocide or crimes against humanity, it was not possible to criminalize the “denial” of the “Armenian genocide” as it would be a disproportionate attack to the freedom of expression. However, stating that France would continue to support domestic and foreign initiatives for the recognition of the “Armenian Genocide”, Hollande tried to reassure the audience by declaring that a mission was launched to work on the modalities to institute “a national day of commemoration of all genocides, war crimes and crimes against humanity, and thus the Armenian genocide.”

Thus, President Francois Hollande finally admitted that efforts to criminalize the “denial” of the “Armenian genocide” and thus impose the Armenian narrative are futile. He admitted his failure and defeat in the face of law. Obviously, his proposition to make up for this failure -a day in which the “Armenian genocide” will be celebrated among others- is not what those who embraced the Armenian views expected; they wanted the punishment of those who rejected their opinions. However, the final ruling of the Constitutional Council, in fact, is the final nail in the coffin of the efforts in France to impose the one-sided Armenian version of history and to punish those who reject it. Ultimately, President Hollande, who has been “gauche” in the political sense, has proven to be “gauche” in the literal sense.

*Photo: Presidency of the Republic of France

[2] It should be also mentioned that in in January 2016, the Constitutional Council of France, declared its verdict with regard to the Gayssot Act, a law concerning Holocaust denial, and confirmed that only a competent tribunal may decide whether or not an event or act constitutes genocide.