CONFERENCE ORGANIZED BY AVIM AND KONRAD ADENAUER STIFTUNG TITLED “PROJECTIONS FOR THE FUTURE OF THE TURKISH-ARMENIAN RELATIONS
Commentary No : 2015 / 134
AVİM
16.12.2015
1 min read 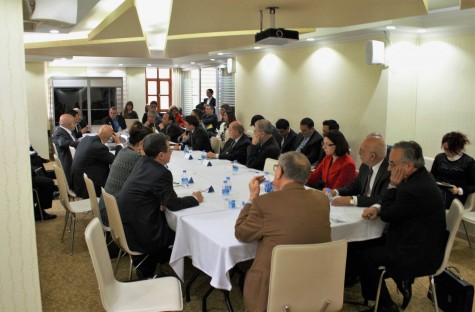 On December 16, 2015, Center for Eurasian Studies (AVIM) and Konrad Adenauer Stiftung held a conference in AVIM Conference Room titled “Projections for the Future of the Turkish-Armenian Relations”.

In the first panel titled “Future of the Turkish-Armenian Bilateral Relations”, which was moderated by Richard Giragosyan (Director of the Regional Studies Center), Prof. Dr. Kemal Çiçek (Dean of the College Of Humanities at İpek University), Styopa Safaryan (Head of the Research Programs of the Armenian Institute of International and Security Affairs), Dr. Aybars Görgülü (Project Manager at Public Politics and Democracy Studies (PODEM)), Ruben Mehrabyan (Associate Fellow at the Armenian Institute of International and Security Affairs; Editor of the First Armenian News and Analyses) and AVIM Specialist Mehmet Oğuzhan Tulun delivered their presentations.

In the final panel moderated by Director of AVIM, Ret. Ambassador Alev Kılıç, a general evaluation of the discussions in the first two panels was made with the contributions of the speakers and participants.