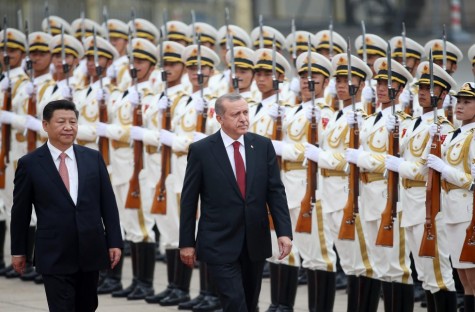 Between the dates 28-30th of July President Erdoğan and President Xi Jinping came together. Erdoğan also held meetings with Chinese officials, including Prime Minister Premier Li Keqiang. President Xi called for closer cooperation with Turkey in trade and energy sectors in the context of its New Silk Road Project which was presented during his landmark 10-day visit to Central Asia in September, in 2014.[1]

New Silk Road Project has been created with the purpose of enhancing regional cooperation, creating political flexibility, improving economic growth, offering trade diversifications, investing in transportation, mining and in energy sectors. The motto of Silk Road Project, One Road, One Belt, aims to strengthen relations between China, Central Asia and Europe by building a network of transport connections among eastern, western and southern Asia, eliminating trade barriers, decreasing transaction costs and increasing economic competitiveness. Considering Turkey’s geographical location, Turkey functions as a bridge which connects Asia and Europe. That is the reason why Turkey attaches importance to the realization of the Chinese project.

Accordingly, President Xi and Erdoğan discussed about signing of several trade and investment agreements, including a memorandum of understanding to establish a deputy prime minister-level cooperation committee, and preparing  a development plan to promote and secure investments between the two states.[2] Xi proposed making full use of the vice premier-level inter-governmental cooperation committee to boost cooperation in aspects of politics, economy, culture and security. He pointed out high-speed railways, new energy, finance and investment as particular areas of opportunity and said "Entrepreneurs are major players for win-win economic cooperation". In response, Erdoğan expressed that Turkish companies are anticipating energy investments in China and he underlined that both countries are ready to support investors.[3] Besides, Turkey suggests a special free-trade zone that will enable Chinese firms to carry out trade and production in Turkey.

Considering the content and the outcomes of the latest meetings with former ones, it is possible to say that the relations between Turkey and China have been growing rapidly. For example, on the occasion of the 40th anniversary of the establishment of diplomatic relations, 2011 was celebrated both in Turkey and China. Furthermore, 2012 was the “Year of China in Turkey” and 2013 is the “Year of Turkey in China”.[4] Currently, Turkey was accepted as the Dialogue Partner in the SCO Summit held on June 2012. From the economic perspective and in the context of the Silk Road, Turkish government welcomes reviving historic Silk Road and Chinese investments. For instance, Turkey and China signed an agreement in 2010 and it was decided to build Silk Railroad to be composed of high speed trains between Edirne and Kars in Turkey which would be jointly constructed by Turkish and Chinese companies. Later, in 2012, after Chinese officials Turkey visit, Turkey has decided on establishing an approximately 5.000 km of railway network, including high speed train projects, with Chinese companies. Additionally, in the context of New Silk Road Project both states agreed to build a roughly 7000-kilometer rail route. The construction is expected to be completed by 2023.[5]

Turkey’s to cooperation with China appears to bear fruits. When examining, firstly, in March, 2015, Turkey was accepted as a founding member of the Asia Infrastructure Investment Bank (AIIB) which is established under the leadership of China in order to fund investments and infrastructures for Silk Road Project and the bank has 40 billion dollars fund. [6]So that, Turkey has a chance to have financial support of AIIB in infrastructure costs of project and will be important part of it in terms of markets. Secondly, in order to eliminate the trade deficit Turkey proposed to implemented some regulations for making foreign trade in national currencies, Turkish Lira and Yuan. The aim is to increase the bilateral trade volume to 50 billion dollars by 2015 and to 100 billion dollars by 2020. Lastly, it is an essential step for Turkey in order to expand its investment and trade volume with China. As it is seen on the chart below, China is already Turkey’s third-largest trading partner, after Germany and Russia.

Furthermore, first long-range air and anti-missile defense system of Turkey was the important topic of the meetings. As a NATO member, Turkey receives military equipment and technology from the Euro-Atlantic countries. But Turkey is dissatisfied with this because of not having the technology seeks to diversify its options and to be independent in air defense. As a result, Turkey undertakes to acquire technology with China, especially missiles. In September 2013, relatively it was an advantageous decision for Turkey to select China Precision Machinery Import-Export Corp. (CPMIEC) for the air defense architecture for following reasons. Firstly, it is worth $3.44 billion which is under Turkey’s specified budget of $4 billion. Secondly, Unlike the US and Italian-French companies, Chinese company agreed on co-production and technology transfer. As Turkish Defense Minister Yılmaz expressed in October, 2013, “We had asked for co-production and a technology transfer. If other countries cannot guarantee us that, then we will turn to ones that can.”[8] In the meeting Erdoğan said that the $3.44 billion deal with China would be discussed during his visit to Beijing but the contact remains to be signed. [9]

Turkish rejection of American and European firms led the West to have some questions and doubts about Turkey. Additionally, NATO and the US officials have warned that any Chinese-built system could not be integrated with Turkey's joint air defense assets with NATO and the United States.

To sum up, Turkish rejection of American and European firms led the West to have some questions and doubts about Turkey. Besides, NATO and the US officials have warned that any Chinese-built system could not be integrated with Turkey's joint air defense assets with NATO and the United States. Turkey’s favourable position to China led Turkey’s western allies voice concern about our axis shift in Turkish Foreign Policy.[10] However, it does not seem like that Turkey would ignore its past and present relations with the West. On the other hand, maintaining good economic relations with China will contribute to development of Turkish economy, hence Turkey should continue to give importance its relations with China, without giving up.

[7] The data is from the Turkish Institute of Statistics (TÜİK).