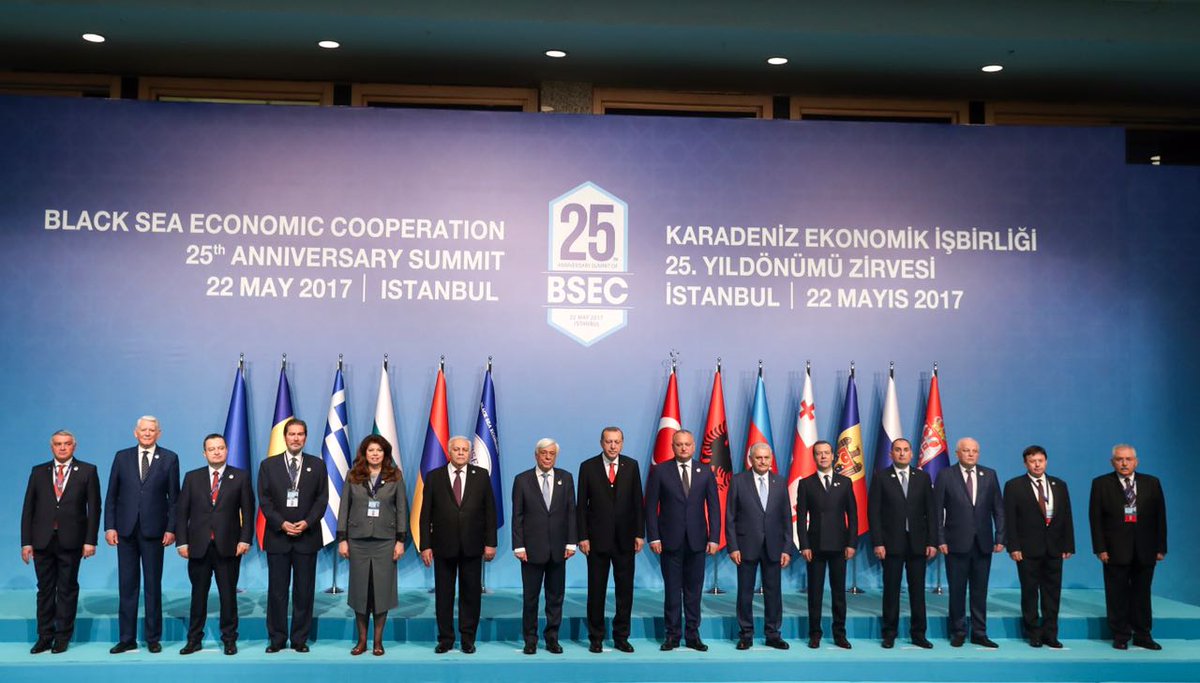 On May 22, 2017, Turkey hosted the 25th Anniversary Summit of the BSEC Heads of State and Government as the member country currently holding the chairmanship. At the summit, President Erdoğan reiterated Turkey’s support for BSEC’s mission by stating: “Turkey will continue to support the efforts aimed at ensuring peace and welfare in the Black Sea region.” Turkey will hand the chairmanship-in-office over to Ukraine on June 29.

The Black Sea Economic Cooperation (BSEC) is a regional economic organization established with the signature of Istanbul Declaration and the Bosphorus Statement in 1992 by Heads of State and Government of Albania, Armenia, Azerbaijan, Bulgaria, Georgia, Greece, Moldova, Romania, Russia, Turkey, and Ukraine. In 2004, Serbia also joined the organization. The headquarters of BSEC is in Istanbul and the current Secretary General is Ambassador Michael B. Christides of Greece. There are 18 working groups functioning under BSEC that mainly cover trade and economy, transportation, energy, telecommunication, science, and technology. BSEC has four bodies: Parliamentary Assembly of the Black Sea Economic Cooperation (PABSEC), the Black Sea Trade and Development Bank (BSTDB), the International Centre for Black Sea Studies (ICBSS), and the BSEC Business Council (BSEC BC).

In the past 25 years, during times when the regional environment was blurry in the post-Soviet period, BSEC managed to serve as a platform for the member countries to open channels to communicate and cooperate on the issues related to Wider Black Sea region. Despite the hot conflicts between member countries; Armenia and Azerbaijan; tensions between Turkey and Greece; Russia and Georgia; Russia and Ukraine, BSEC still functions as a regional economic organization.

BSEC was initiated with the vision to create an economically-integrated South Caucasus and Black Sea region. Turkey, as the actor behind the establishment of BSEC, supported membership of all countries equally with the hope that BSEC would eventually establish economic cooperation among BSEC members. In that line, at an interview Secretary General Ambassador Michael B. Christides stated: “We want to be more project-oriented and we want to become more efficient because the added value of this organization for all these 25 years has been that it managed to establish a culture of dialogue and cooperation. Whatever the problems are at many times, we are sitting around a table all together, discussing various projects of common interest” to explain the prospects on BSEC.[1] Christides also stated that projects and cooperation in the fields of energy, transportation, and tourism should be top priorities of BSEC. BSEC region has rich energy resources, gross domestic product of member states has reached $2.7 trillion and the population is around 350 million.[2] In addition, considering the geography it covers, BSEC is in the heart of the connectivity projects aiming to build transportation and pipeline corridors between West and the East, connecting Europe with Caspian Basin and beyond. As Secretary General Christides underlines, “…There are no roads or railways connecting Asia and Europe that do not pass through BSEC territory.”[3]

Developments in the Black Sea region are the matters of wider multi-lateral policies. NATO is actively conducting military exercises with the countries in the Black Sea, mainly with Romania, and strengthening its military capabilities in the region. European Union is engaging with the non-EU member countries in the BSEC region through Neighborhood Policies, funds or through specific agreements that mainly cover energy and transportation projects. Also recently, Russia has been increasingly expanding her area of influence. Russia-led Eurasia Economic Union has been offering further economic integration to countries which are already in the Russia’s sphere of influence. In addition, within the framework of BSEC, Russia made a voluntary contribution of one million US dollars to Black Sea Project Promotion Facility in December 2016 at the 35th Meeting of the Council of Ministers of Foreign Affairs of the Organization of the Black Sea Economic Cooperation (BSEC) that was held in Serbia.[4] The Facility was established to promote regional investments and support the projects on energy, infrastructure, technology, and investments. Russian Foreign Minister Sergei Lavrov stated: "This mechanism will certainly operate within the BSEC's fundamental principle, under which mutually beneficial joint projects must not be subject to politicization and must not create any problems for any BSEC member," and added that any member country who would like to promote regional cooperation will be able to benefit from the Facility, in 2016.[5] The Facility will support BSEC’s works for sure. However, Russia’s contribution might turn into a new tool to consolidate her presence in the BSEC region if it is not managed well, as BSEC partially covers the area that has utmost importance for Russia’s security.

There is an inarguable economic potential, albeit political issues slow down the integration process. As President Erdoğan underlined at the summit by saying “We may have political and even major problems among us but we should make sure we keep our organization away from those problems. Only then we will be able to work efficiently and, in fact, we should do even more”[6], it is vital to remain focused on the common interests and gains. If member countries do not avoid political discussions, that might trigger tensions in a region that is already going through difficult times. Considering current militarization and the revival of the frozen conflicts in the Black Sea and South Caucasus, increasing tensions in the Balkans, there is a need to limit BSEC’s working area only in the field of economy in order to actualize the potential of the organization and avoid bringing political issues to the agenda. In order for BSEC to function better, member countries should devote their works to encourage inter-regional trade and cooperation, and avoid negative attitudes to not to hinder the real mission of the organization.

At this point, it is important to draw attention to positions of the member countries at the summit that was held on the May 22. According to Anadolu Agency, Armenian and Azerbaijani representatives, Armenian Deputy Foreign Minister Ashot Hovakimian and Azerbaijani Speaker of the Parliament Ogtay Asadov respectively, addressed political issues and exchanged words[7], and that eventually had the risk of undermining the real role of BSEC. In order to avoid any kind of political discussions, President Erdoğan said “None of the representatives who spoke at the summit resorted to political accusation or assessment. But you (addressing to Hovakimian) have devoted your full speech to this, which in my opinion is wrong” as APA news noted.[8] President Erdoğan also said: “This duty [to resolve the issue] should be carried out by [Europe’s OSCE] Minsk trio…These negotiations have been ongoing for over 20 years -- it should not continue much more. Concluding this issue will have big benefits.”[9] In point of fact, Armenia’s declining motivation towards BSEC is observable as Armenia decreased the level of her representation from Ambassador to Counsellor Level whereas Turkey is represented on the Ambassadorial level.

Stability and the prospects on the regional cooperation in the region have been challenged in the recent years; Russia’s aggressive policies; the annexation of Crimea and conflicts in eastern Ukraine, the 2008 Georgia-Russia War; and the “awakening” of frozen conflicts in the South Caucasus; 4-day war in Nagorno-Karabakh. As a natural outcome of the developments in the region, foreign policy tendencies and security perceptions of the BSEC member countries are different from each other. Yet, as it is the task of BSEC, the economic potential untainted by political calculations is still present and relevant. Moreover, despite the current political environment being rather challenging, economic aspects of the regional developments are relatively promising. China-led One Belt-One Road (OBOR) initiative has presented new opportunities for BSEC participant countries, since all major paths that are to be taken by OBOR pass through BSEC countries’ territories.

Yet, although they have the right to do so, none of the member countries withdrew their membership from the organization. It gives a clear sign for the necessity to create a regional platform to promote cooperation on selective issues and sectors as stated above. BSEC has the potential to decrease tensions among members as Prokopis Pavlopoulos, President of Greece, underlined by giving the example the problems between Turkey and Greece. He said stronger cooperation would “ease tension and help find solutions to problems that exist between Greece and Turkey.”[10] However, the level of the integration remains vogue due to different foreign policy and economic choices of the BSEC countries. For example, on one hand, Armenia is a member of Russia-led Eurasian Economic Union. On the other hand Ukraine, Goergia and Moldova signed Association Agreement with the European Union. Turkey has a balanced policy with regard to its relations with the European Union and Russia. Considering the concerns and problems related to mainly security, we can argue that BSEC covers a region standing on fragile political situation. Hence, it is important to strengthen cooperation in the economic field on a win-win basis.