MACRON AND MERKEL TO ORGANISE SERBIA-KOSOVO SUMMIT WHEN CONDITIONS ARE ESTABLISHED
Share : 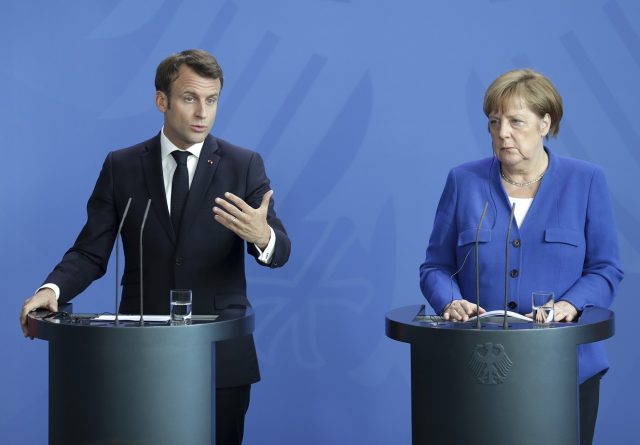 When conditions are met for the resumption of the Dialogue, and the COVID-19 crisis is overcome, President Macron and Chancellor Merkel plan to host a Summit between Serbia and Kosovo in Paris, with the participation of both parties’ leaders and High Representative Borrell.

This was announced yesterday in a joint statement by the Ministries of Foreign Affairs of France and Germany, which also stressed that Kosovo needs a stable and fully functioning government to deal with this crisis.

Therefore, they urged the vote of no-confidence in the Government be reconsidered or postponed. However, the session, triggered by the junior coalition partner Democratic League of Kosovo, is already underway.

Germany and France welcomed Prime Minister Kurti’s intention to restart the dialogue with Serbia and to involve all stakeholders in order that Kosovo speak with one voice.

“The decision taken by the Kosovo Government on 20 March to lift the 100% tariff on raw materials is an important first step in the right direction. We expect that the tariffs will be fully suspended from 1 April, and we expect Serbia to do its share of the efforts”, the declaration reads.

It also stressed that the dispute between Serbia and Kosovo is a European security matter, therefore the European Union will continue to lead the facilitation efforts as soon as both parties agree to restart their talks. In addition, coordination with EU’s partners, in particular the United States, will be pursued, France and Germany stated.

On the other hand, US Ambassador to Pristina, Philip Kosnett, in a statement posted in Twitter yesterday, said he is pleased to see the Parliament of Kosovo hold a session on the no-confidence vote in Albin Kurti’s Government.

“Pleased to see the Assembly will hold a session on the no-confidence vote tomorrow,” Kosnett said in Twitter after Parliament’s Presidency agreed for the lawmakers convene on Wednesday at 11:00 and vote a motion of no-confidence in Government initiated by junior ruling coalition partner – the Democratic League of Kosovo (LDK).

Earlier today, Member of the European Parliament (MEP) and standing Rapporteur for Kosovo, Viola von Cramon-Taubadel, has criticised the US Embassy in Kosovo for supporting the Parliament’s vote of no confidence in Albin Kurti’s Government, Gazeta Express reports.

“An own goal of the US in Kosovo with a historical dimension. How can you an ambassador be pleased to see a functional government tumbling in the Corona Pandemic? Unbelievable. Irresponsible. I feel terribly sorry for the citizens of Kosovo,” she wrote in Twitter.