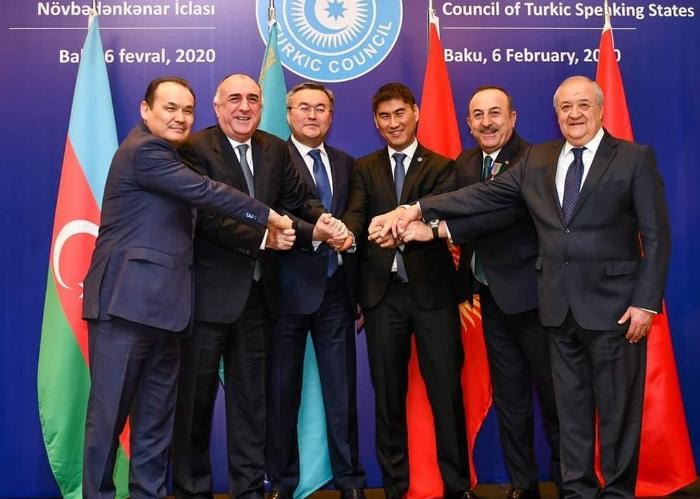 The Cooperation Council of Turkic Speaking States (Turkic Council) was established in 2009 as an intergovernmental organization with the Nakhichevan Treaty signed between Azerbaijan, Kazakhstan, Kyrgyzstan, and Turkey with the aim of promoting cooperation within a joint structure. The organization’s flag contains the elements of the national flags of the founding member states: the eight-pointed star (Azerbaijan), the color blue (Kazakhstan), the sun (Kyrgyzstan), and the crescent (Turkey).

The cooperation process between the Turkic-speaking countries started right after the dissolution of the Soviet Union and the establishment of the new Turkic Republics. Turkey was one of the first countries to recognize the newly founded Turkic Republics. In this process, many bilateral and multilateral collaborations have been carried out in political, economic and cultural areas. Established in 1992, the Turkish Cooperation and Coordination Agency (TİKA) has played a role in the execution of cooperation mechanisms in the field of development. The foundations of the Turkic Council are based on these collaborations and the summits of the Heads of Turkic Speaking States that have been held since 1992.

The main decision-making body of the Turkic Council is the Council of Heads of State. The other bodies are the Council of Foreign Ministers, the Senior Officials Committee (which provides technical information), the Council of Elders, and the secretariat. The organization's secretariat is located in Istanbul. The Secretariat carries out its activities with a secretary general and deputy general secretaries representing each member country, project managers, and experts. Ambassador Halil Akıncı, the first secretary general of the organization, was in office between 2010 and 2014, and then it was Rami Hasan, representing Azerbaijan, who was in office between 2014-2018. Ambassador Baghdad Amreyev, representing Kazakhstan, is the current General Secretary of the Organization. The institutions with which the Turkic Council has a partnership relationship include the International Organization of Turkic Culture (TURKSOY), the Parliamentary Assembly of the Turkic-speaking Countries (TURKPA), the International Turkic Academy - Turkic World Educational and Scientific Cooperation Organization (TWESCO), and the Turkic Culture and Heritage Foundation.

It is known that the member countries of the Turkic Council are also members of competing organizations. Kazakhstan and Kyrgyzstan are members of the Russia-led Collective Security Treaty Organization (CSTO). Again, Kazakhstan, Kyrgyzstan, and Uzbekistan are members of the Shanghai Cooperation Organization. In addition, Kazakhstan and Kyrgyzstan are members of the Eurasian Economic Union. Cooperation within the framework of the Turkic Council does not mean that Turkey (which is in full negotiation process with the European Union, a member of the EU Customs Union, and is part of the NATO alliance) is in search for other alternatives in the East. It is possible to say that the Turkic Council can play a role for regional and global cooperation and the establishment of peace. Ambassador Halil Akıncı, the first Secretary General of the Turkic Council, describes this situation as “congruence instead of conflict”. The understanding of "Constructive Eurasia" has been discussed many times in the articles of Center for Eurasian Studies (AVİM). Accordingly, it has been stated that "Constructive Eurasianism" is aimed at encouraging regional cooperation instead of rivalries and antagonisms, unlike the anti-Western expression of other forms of Eurasianism.[1]

At a time when the China-US competition is intensifying, China's Belt and Road Initiative has further increased the importance of Central Asia. In line with these developments, the European Union has also felt compelled to develop close relations with the Central Asian countries. In line with this, the EU has published a document in 2019 that points out the goal of cooperation with Central Asia and revealing its new strategy for Central Asia. (On 23 January 2020, in a roundtable meeting which was held at AVİM titled “The New EU Strategy on Central Asia: New Prospects for Synergies and Closer Cooperation between European Union and Turkey in the Region”, the EU’s renewed strategy regarding Central Asia was discussed with the EU Delegation headed by the EU Special Representative for Central Asia Ambassador Peter Burian, Turkish academics, and AVİM analysts.)

Transportation: First Secretary General Akıncı states that the biggest obstacle in the development of economic relations between the member countries is transportation and that activities are carried out under the roof of the organization to eliminate this obstacle. With this aim, many meetings of Ministers of Transport/Working Groups have been held under the roof of the Turkic Council. The Trans-Caspian Corridor, one of the most important steps in this direction, has provided significant opportunities for the transportation of goods to various parts of the world thanks to the strengthening of transportation connections between member countries, facilitating the transportation of goods, railway - road connections and port connections.[2]

Apart from this, it is aimed to develop the ports of the member countries as important centers in transportation within this framework. In 2013, a Memorandum of Understanding was signed for the purpose of establishing a Sister Port relationship between the ports of Baku (Azerbaijan), Aktau (Kazakhstan's main port in the Caspian Sea) and Samsun (Turkey).[3] Kazakhstan's Kuryk Port was incorporated to the Sister Ports cooperation process in 2019. Turkmenbashi port has also been invited to the Sister Ports process. Regular ferry services have been planned between these ports. Thus, the central position of the member countries in the Europe-Asia connection on the East-West axis through the Caspian Sea, Baku-Tbilisi-Kars Railway, and the Turkish Straits has further strengthened.

As a result of recent developments in Nagorno-Karabakh, the corridor to be established between Azerbaijan and Nakhchivan[4] (hence, Turkey) provides a direct road connection between Turkic states for the first time after their independence. In addition, deep-water friendship agreement on joint exploration and development of field in Caspian Sea signed between Azerbaijan and Turkmenistan on 21 January 2021 has been an important development in terms of resolving past disputes. All this means that, within the framework of the Turkic Council, we can expect the development of relations and further intensification of cooperation in the future.

Economy: Regular meetings and activities of the Ministers of Economy are held within the Turkic Council. In line with the goals of the organization in the economic field, three working groups were established under the titles of "improving the investment environment", "diversifying the economy" and "entrepreneurship as the basis of economic relations".[5] A Joint Investment Portal has been launched within the Turkic Council and the establishment of an investment fund among the member countries is on the agenda. In addition, it was decided in 2019 to regularly hold “Young Entrepreneurs Forum” meetings within the Turkic Council. Work is carried out to deepen cooperation in the fields of tourism and customs.

Education, Science and Culture: Since the establishment of the Turkic Council, work has been carried out to implement concrete projects in the field of culture, science, and education. Education, Science, and Culture have been among the priority issues at the general summits of the organization. A Joint Terminology Committee has been established to carry out efforts to develop joint terminology among member countries, and this committee has worked on developing a joint terminology dictionary for the conduct of scientific initiatives.

Other important projects carried out in this field include the ones by the International Turkic Academy (established as an international organization under the aegis of the Turkic Council): the preparation of a common history textbook of the Turkic world and having it taught in schools, the preparation of a joint literature book, and the establishment of a joint education television. The Turkic Council has also proposed a common alphabet for member countries and the common Latin alphabet has been used in the secretariat's internal correspondence.[6] Kazakhstan's decision to switch to the Latin alphabet as of 2023[7] shows the goals addressed by the member countries within the Turkic Council to give momentum to concrete steps.

Scientific activities, especially in the fields of culture, history, economy, and sociology, are carried out in the research centers within the structure of the International Turkic Academy. With the establishment of the Turkish Library, work has been carried out to bring together 32,000 works (including rare books and old texts) and to set up an electronic database.[8]

The Orhun process, which envisages the exchange of student-faculty members, has been put into operation within the scope of the "Universities Union" established with the aim of ensuring cooperation between higher education institutions of member countries. TURKSOY, which was established in 1993 with the aim of protecting, researching, and promoting common cultural heritage, has also become the partner organization of the Turkic Council. The Turkish Culture and Heritage Foundation, which was established at the second summit of the Turkic Council, supports activities, projects, and programs within the framework of cooperation with TURKSOY and the International Turkic Academy.[9]

Since its establishment, the Turkic Council has made great progress in as little as 11 years. In the future, in line with the goals of the Turkic Council, it is expected that the cooperation in the region will develop, the cooperation with other international organizations will diversify, and the strategic position of the organization in Asia and Europe will be consolidated.