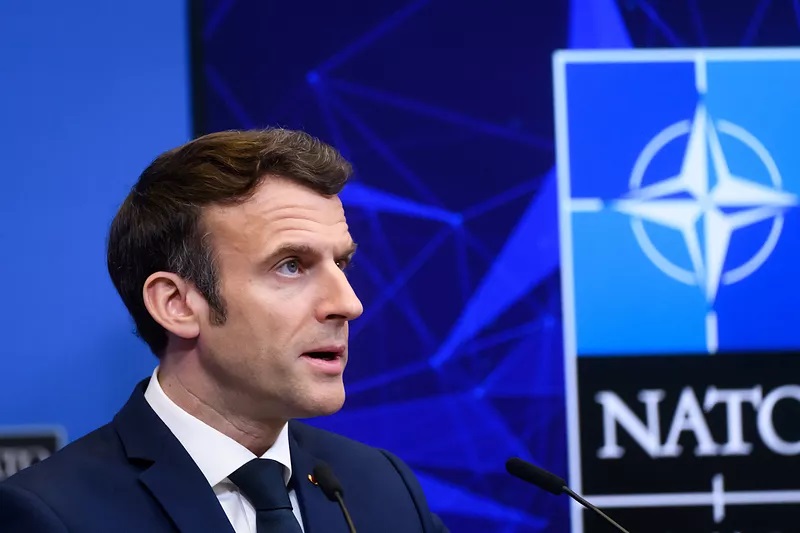 In his speech at the closing ceremony of the Conference on the Future of Europe in the EU’s European Parliament, on the occasion of 9 May 2022 Europe Day, French President Emmanuel Macron made a proposal to redraw the political map of the European Continent. He talked about the creation of a new "European Political Community" that would include both EU members and non-member states.[1] At the beginning of his speech, Macron recalled Robert Schuman's remarks on May 9, 1950, regarding the contribution Europe can bring to the civilization: “World peace cannot be safeguarded without the making of creative efforts proportionate to the dangers which threaten it.” Macron later stated that these remarks are even more necessary today than in the past and drew attention to the fact that the situation in Ukraine brought the war back to the European continent.[2] Macron said that he knew that there were concerns about a  “multi-speed Europe,” however, he emphasized that the European Union, considering its level of integration and ambition, cannot, in the short term, be the only way to structure the European continent in spite of the fact that  “Western Balkan”  countries have begun the accession process. According to Macron, in the face of the emerging new geopolitical context, a way of thinking about the unity and stability of Europe without weakening the closeness built within the European Union must be found. Per Macron, such a thinking does not mean that the only solution for the European Union is accession. After expressing these views in his speech, Macron explained his "European political community" proposal as follows:

"In 1989, President François Mitterrand opened up this reflection when the Soviet Union collapsed, proposing the creation of a European confederation. His proposal did not bear fruit. It was most certainly ahead of its time. It included Russia in this confederation, which, of course, was swiftly deemed unacceptable for the States that had just freed themselves from the yoke of the Soviet Union. But it raised the right question, and this question remains: how can we organize Europe from a political perspective and with a broader scope than that of the European Union? It is our historic obligation to respond to that question today and create what I would describe here before you as “a European political community.”

Macron explained that this new European organization would allow democratic European nations that subscribe to EUs shared core values to find a new space for political and security cooperation, cooperation in the energy sector, in transport, investments, infrastructures, the free movement of persons. He claimed that his proposal would not prejudge future accession to the European Union necessarily, and it would not be closed to those who have left the EU.

“1. The European Council held a strategic discussion on the European Union’s relations with its partners in Europe. It discussed the proposal to launch a European political community.

What, who and how?

The objective would be to foster political dialogue and cooperation to address issues of common interest so as to strengthen the security, stability and prosperity of the  European continent.

2. Such a framework will not replace existing EU policies and instruments, notably  enlargement, and will fully respect the European Union’s decision-making autonomy.

3. Building on this first exchange of views, the European Council will revert to the issue.”[3]

As it will be recalled, Emmanuel Macron, five years ago in  his speech at the Sorbonne University on 26 September 2017, with his known hyperbolic and provocative style, launched his ambitious goal  of enigmatic "European sovereignty" concept the key ideas of which are defense, the protection of the borders, foreign policy and ecology.[4] In introducing this concept, Macron, as he always did, equated Europe with the European Union. In other words, he claimed that the European Union represents the whole of Europe. While making this claim, he set aside the conventional meaning of concept of sovereignty that emerged over the centuries. When one hears his argument of “European sovereignty,” following questions immediately come to mind: Can Europe be sovereign as a continent? If the European Union (EU) is meant, how can the EU, an international organization of a regional nature, be sovereign? Who pricelessly is the sovereign in a proposed sovereign Europe? What is the basic unit of sovereignty in sovereign Europe? How is it possible to achieve such a goal with concrete projects? How can a new doctrine, a new European-wide political structure and security policy be created with an undefined concept? The reason for voicing these questions, whose answers are in fact unknown in real world scene, is to draw attention to how weak the conceptual foundations of the proposed thought are and how empty the introduced concept is.

Macron, in his Sorbonne speech, while referring to security and defence issues, stated that “first key, the foundation of any political community, is security” and that Europe needs “autonomous operating capabilities” and “common strategic culture.” He advocated “strategic autonomy” for hypothetical “sovereign Europe.” In fact, Macron, albeit in a limited scale and with carefully crafted sentences, repeated his ideas on “sovereign Europe” concept also in his above mentioned 9 May 2022 speech in EU European Parliament and said that “France has once again clearly and resolutely chosen Europe in entrusting me with another term of office to work with all of you to build a stronger and more sovereign Europe.” In his concluding remarks Macron, between the lines, also referred to the “sovereign,” united, democratic, and ambitious Europe.

In this context, considering that Macron pronounced security as “first key, the foundation of any political community,” it is worth remembering his inappropriate comments about NATO  which is  the guardian angel of European security. As it was mentioned in our AVİM Analysis 2022/3, Emmanuel Macron in November 2019 arrogantly claimed that NATO was brain dead, and Europe was on the edge of the precipice. He also assertively questioned NATO's very future and expressed his long-time dream of developing a European military force.[5] In our referenced analysis, after drawing attention to the war situation in Ukraine, we mentioned the press reports that EU member states Sweden and Finland which have been sceptical of NATO for a long time, are preparing to apply for NATO membership. In relation to this development, we emphasized that Macron's prophecy that NATO is brain dead was revealed to be wrong in two years time.

As per the recent NATO statement, Finland and Sweden completed accession talks at NATO Headquarters in Brussels on 4 July 2022, as agreed by NATO leaders at their Summit in Madrid on 28–30 June 2022. Both countries formally confirmed their willingness and ability to meet the political, legal and military obligations and commitments of NATO membership.[6] According to further NATO statement, NATO Ambassadors signed the Accession Protocols for Finland and Sweden at NATO Headquarters on 5 July 2022 marking the start of the ratification process, in which it is stressed that “Allied leaders agreed to invite Finland and Sweden to join NATO following the agreement of a trilateral memorandum between Türkiye, Finland, and Sweden.”[7]

In this conjunction it is worth also mentioning that as explained in our AVİM Analysis 2022 / 6, the European Union (EU) member states have hastily approved at the European Council on 21 March 2022 “A Strategic Compass for Security and Defence” document to make the EU a more capable actor in security and defence. The document was described as a guide for action, providing concrete proposals and timelines for the coming 5-10 years to strengthen EU security and defence policy by 2030.[8] While analyzing the details of the document, we called attention to the point that the Compass document and the certain preparatory documents developed by the EU institutions in this process, unfortunately, considered Turkey, which has been an associate country of the EU since 1963, a candidate for membership since 2005, and a NATO member since 1952, as an adversary country. Ironically, EU member countries Sweden and Finland were admitted to accession process of NATO thanks to last- minute approval by Turkey that EU often considered as adversary in various EU documents. These days, where security is not provided with empty words but with hard power in military nature, we believe that it would be beneficial for EU countries to carefully evaluate the facts revealed by this example in terms of the future of European security. Because security is not provided by empty words and boastful statements, as Macron does, but by real military force. It is obvious that the war in Ukraine clearly demonstrated that this power does not exist in the EU. It should also be underlined that the probability of the EU having such a military force in the near future seems extremely low.

Macron's European Political Community (EPC) proposal: A tool to fob off to countries that have been working for EU membership

In our judgement, Macron's EPC proposal is not only ill-defined, but worse than that, ill-intentioned. This extremely vague proposal seems to be a calculated move to keep the EU membership process of the Balkan countries of Albania, Bosnia-Herzegovina, Kosovo, Montenegro, North Macedonia, and Serbia indefinitely in limbo. It is also possible to say that Macron's proposal is a delaying tactic for Ukraine, Moldova, and Georgia which aspire to join the EU.

At this point, we believe that it is necessary to wait for the following questions to be answered clearly in order to understand whether this proposal is a sheer deception or not: While there exist  organizations in Europe such as the Organisation for Security and Cooperation in Europe (OSCE) and the pan-continental Council of Europe which cover all these countries, why is it necessary to strive for a structure whose purpose is unclear?  Apart from trying to bring Mr. Macron and France to the fore, what is the added value of the proposal to create such a structure for European security and stability? Emmanuel Macron in his last speech asserted that his proposal of EPC will create a "new space for political and security cooperation." In an environment where security in Europe has changed radically for the first time since the Second World War, a hot war is taking place in the middle of Europe, and EU countries such as Sweden and Finland have taken refuge in NATO to ensure their security, is it possible to cooperate on security in an ambiguous EPC platform? Is such a thought realistic?

Emmanuel Macron has long put forward grandiose but hollow ideas for the European continent. By using as a tool the EU membership expectations of various European countries, he has been trying to bring himself and France to the foreground. The European Political Community proposal he made at the end of the process that started with his Sorbonne University speech is the latest example of this attitude. As Macron himself mentioned in his last speech, Mitterrand's proposal to create a European Confederation after the fall of the Berlin Wall in 1989 did not attract any attention and was vanished in the depths of history. It is possible to say that Macron continued the habit of French governments to propose grandiose, seemingly abstract ideas for Europe at an improper time when the ongoing war in Ukraine has radically shaken security and stability in Europe. This proposal most likely will be interpreted as France's pursuit of its own petty interests in a time when some others suffered great harms and experiencing vital troubles. The time we are in is not the time to chase after imaginary projects, but to face the realities.

One of those realities not only for Macron’s France but all EU members is the need for the acknowledgement of Türkiye as a strategic component of Europe.

[2] Emmanuel Macron, “Speech by Emmanuel Macron at the Closing Ceremony of the Conference on the Future of Europe - French Presidency of the Council of the European Union 2022” (French Presidency, May 9, 2022), http://presidence-francaise.consilium.europa.eu/en/news/speech-by-emmanuel-macron-at-the-closing-ceremony-of-the-conference-on-the-future-of-europe/.