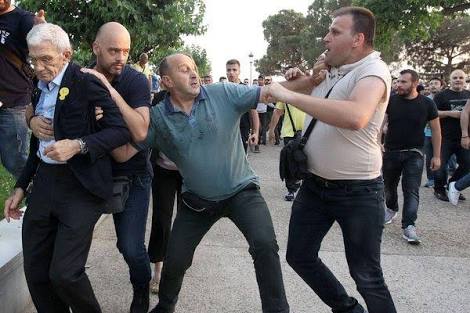 The international press widely reported the brutal assault on Thessaloniki Mayor Yiannis Boutaris on 19 May 2018 perpetrated by the supporters of the Greek far-right Golden Dawn group during the purported “Pontic Genocide” commemoration in Thessaloniki. As it was comprehensively examined in my AVİM report of last year titled “The Pontus Narrative and Hate Speech,”[1] Pontus Greek narratives in relation to the developments during First World War and assertions of a ‘Pontus Genocide’ was invented and propagated in Greece and among the Greek diaspora during the late 1980s.[2] After the pressures from Pontian lobbies, the Greek government passed “a motion on 24 February 1994 that May 19 be day of commemoration for the Pontian Genocide” and the Greek parliament adopted a law declaring May 19 as a day of remembrance of the “Genocide of the Pontian Greeks.”[3]

Among many other news sources, the New York Times also reported the incident and stated that “the 75-year-old mayor of Greece’s second-largest city was brutally assaulted by a far-right mob at a public gathering over the weekend, an attack that brought gleeful expressions of support from nationalist groups and heightened concerns about a rise in hate crime in the country.”[4] The paper presented the mayor as being “known for his liberalism and outspoken views against far-right violence and racism”, and reported that he was “hospitalized with head, back and leg injuries” after the attack. Per the New York Times report, “Prime Minister Alexis Tsipras condemned the ‘barbaric’ attack on Mr. Boutaris in a speech to his cabinet” and condemned “a dark and extreme section of the main opposition” which “lays out the carpet for the far right.” It is quite significant that far-right groups, however, according to again New York Times, applauded the brutal attack against 75 year-old mayor. For example, Ourania Michaloliakou, the daughter of Nikos Michaloliakos, the leader of Golden Dawn, wrote on Twitter that “Bravo to each and every one who carried out his duty in Thessaloniki today. Respect.”[5]

Another prominent news source, Guardian, reported that “the mayor, one of Greece’s most prominent liberal voices whose visionary policies have helped transform the country’s second-largest city” was assaulted by “Greek far-right extremists” and “rushed to hospital with head, back and leg injuries.”[6] The paper referred to the Greek far-right party Golden Dawn as “one of Europe’s most violent ultra-nationalist organizations, is the country’s third biggest political force and, in an age of austerity and profound polarization, is again on the rise.”

It is reported in the Facebook page of the “Greek Genocide Resource Center” that the Mayor Boutaris;

“attended a genocide rally in solidarity with Pontic Greeks. Before his arrival he tweeted his support for the international recognition of the genocide, yet despite this, Boutaris, a 70 year old man, was set upon by a group of thugs who kicked and punched him violently resulting in his admission to hospital. The violence appears to be a result of a short video which circulated on social media in which Boutaris praised the founder of modern Turkey Mustafa Kemal [Atatürk], and stated that he didn't ‘give a sh*t’ whether Mustafa Kemal killed Greeks. The video appears to have been filmed to promote tourism and does not appear to have a direct connection to the genocide rally.”[7]

In fact, in this video, Mayor Boutaris says the following: “I do not give a [sh*t] if Mustafa Kemal killed Greeks or not. Turks come here, Greeks go to İstanbul" and obviously refers to the importance of tourism and its added value in people to people contacts.[8] Nevertheless, he failed to convince the fanatic, mainly Pontiac Greek supporters of Golden Dawn involved in the attack and unfortunately suffered at the merciless hands of these fanatical assailants. It is worth mentioning that the “Greek Genocide Resource Center” in its above-mentioned message directly accuses the Pontiac Greeks with the following sentences:

“Pontic Greeks for decades have publicly denied that the Greeks from western Asia Minor were victims of genocide citing the presence of Hellenic forces there between 1919-1922. This, despite all the historical evidence that proves otherwise. But no one within Greek society ever physically attacked them. Pontic Greeks disassociated themselves from all other Greeks during the mid-80's and changed the historiography of the genocide, turning the focus entirely on their own plight and away from the plight of all other Greeks who were victims of genocide during that period. But no one attacked them. If Greeks are going to accuse other Greeks of genocide denial and being 'anti-Greek', they must first look at the actions of a certain refugee group who has deliberately divided the genocide experience of Greeks and has resulted in the current situation where we have 3 days of remembrance for the one genocide and each group is working against one another for recognition.”[9]

In fact, this statement clearly confirms my evaluation in our AVİM report of last year that “the Pontic Greeks retained a sense of separate identity and preserved a number of cultural traits as characteristic of their group which separate them from other Greeks.”[10]

It should be underlined that the rise of the far-right and the violence it perpetrates in Greece is not a new phenomenon. Back in 2012, the Reuters news agency made a special report on the far-right rise in Greece and stated that “Arm raised in a Nazi-style salute, the leader of Greece’s fastest-rising political party surveyed hundreds of young men in black T-shirts as they exploded into cheers. Their battle cry reverberated through the night: Blood! Honor! Golden Dawn!”[11] The rise of the far-right in Greece since then continues unabatedly. Therefore, the violence perpetrated against Thessaloniki Mayor Yiannis Boutaris cannot be considered as a surprise.

However, the novelty in this violence is the occasion during which it took place, namely during the "Pontic Genocide" commemoration event. As it was mentioned in our AVİM report of last year, “Out of (these) fabricated stories and unsubstantiated allegations, a language of hate-speech was developed over the years against not only Turks but also against the Republic of Turkey.”[12] We now witness that this hate speech against Turks and the Republic of Turkey is jauntily expanding itself and is turning into hate crimes even against prominent fellow Greeks with views contrasting mainstream views. This unfortunate incident reminds us once again that, in our increasingly globalized world where every society is being effected by the other, we should not let the darkness of hate speech and hate crime prevail in any society.

[5] Kitsantonis, “75-Year-Old Mayor Is Attacked in Greece, and Nationalists Rejoice.”

[6] Helena Smith, “‘Far-Right Thugs’ Attack Mayor of Thessaloniki at Remembrance Event. Yiannis Boutaris Is Recovering after Being Pushed to the Ground, Punched and Kicked,” Guardian, May 20, 2018, https://www.theguardian.com/world/2018/may/20/suspected-far-right-thugs-attack-mayor-of-thessaloniki-greece-at-rall