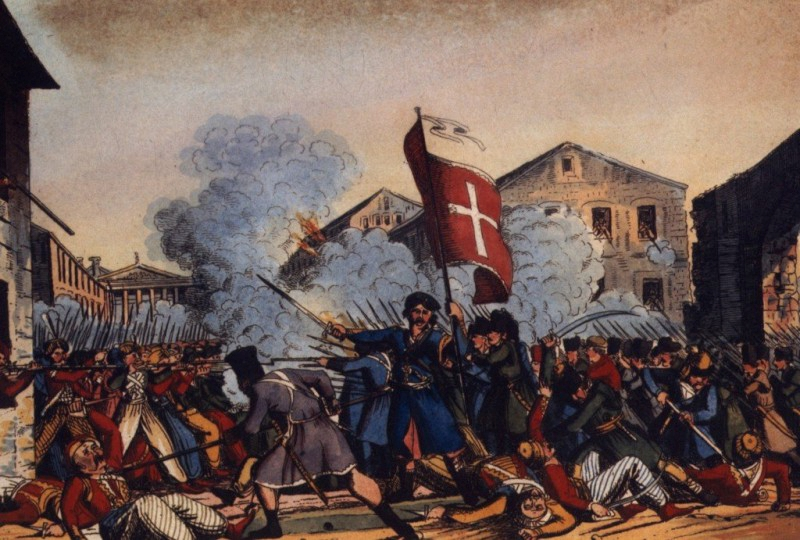 On March 25, 2021, all major western international media outlets reported, with comprehensive analysis, that Greece is celebrating its 200th anniversary since the beginning of the struggle for independence from the Ottoman Empire in 1821. Certain of these media outlets referred to the Ottoman Empire as "the former Turkish Ottoman Empire."[1] It is reported in this regard that "Prince Charles, heir to the British throne whose father Prince Philip was born in Corfu as part of the Greek royal family," Russian Prime Minister Mikhail Mishustin and the French Defense Minister Florence Parly attended the parade in Athens.[2] It is mentioned additionally in the news reports that French President Emmanuel Macron sent a message to Athens expressing that "we will stand by your side when history is unfair to you."[3] Reuters news agency states in its report that "After almost 400 years under Ottoman Turkish rule, Greek revolutionaries launched an uprising in 1821, and with help from foreign sympathizers from countries including Britain, France, and Russia, won their independence in 1832."[4]

In the light of the above news reports and analysis, at this point, in my opinion, the following questions should be brought up and discussed. The first question is: Was the uprising against the Ottoman Empire in 1821 just the beginning of the war for independence for the Greeks, or was it the beginning of brutal massacres committed by gangs who later were presented to be fighting for the independence of Greece? Another question is: Did the start of the 1821 uprising against the Ottoman state follow an epic, glorified narrative created by Greek admirers (philhellenes), or was it, in fact, a beginning of a Turkish and Muslim massacre in the Ottoman territory? If answers to these questions are sought, the first historical fact that comes to mind is the Tripolitsa Massacre of 1821.

Today's southern part of Greece, namely the Peloponnese peninsula, together with the other regions of Greece, was ruled by the Ottoman Empire from the late 14th century onwards and called the "Morea Eyalet." According to historians like Douglas Dakin, the inhabitants of this region preferred Ottoman rule over other ruling powers of the time. There were various reasons for this. First, Ottoman taxes were lower compared to other powers such as the Venetians. Ottoman rule was less harsh and more tolerant compared to any Roman Catholic ruler.[5]

The Greek revolt of 1821 was not the result of a single event. Many unsuccessful revolts occurred during the entire Ottoman period. Especially in the 17th century, there were insurrection attempts against the Ottomans in Greece, especially in Mora. The first significant revolt was the Orlov Rebellion in 1770, initiated with the support and assistance of the Russian Admiral Alexey Orlov, commander of the Imperial Russian Navy during the Russo-Turkish War of 1768–1774.[6] However, these efforts failed. The second effort came with the French during the reign of Napoleon Bonaparte. These efforts also failed with Napoleon's defeat in 1815. Yet each effort and support from the Russian and French state apparatus strengthened the Greeks quest for uprising. In this context, it should be noted that the Greeks established secret revolutionary and militant organization abroad and published newspapers and periodicals to serve the purposes of these organizations. One of these organizations, Athena, strived for Greek independence with the help of France, while another, named Phoenix, tried to achieve the same ambition with the help of Russia.[7]

The rebellion of 1821, which paved the way for the independence of Greece, began with the revolt of the Greeks living in the Mani Cape in the south of the Peloponnese Peninsula against the Ottomans on March 17, 1821. One of the first targets of the uprising was the city of Tripolitsa which is situated in the middle of Peloponnese and administrative center for Ottoman rule in the Peloponnese. Many wealthy Turks and Jews lived there.  After the siege of several months, the city fell in the hands of rebels at the very beginning of October 1821. The number of those brutally killed in the town depends on the sources. However, as per estimations, between 10,000 to 25,000 Turkish-Muslim people were killed. They were not only killed. They were tortured through often publicly exposed different methods. What happened in this massacre is detailed in various British academic sources. When explaining this terrifying savagery in his book written in 1897, British historian Walter Alison Phillips states the following:

For three days, the miserable inhabitants were given over to the lust and cruelty of a mob of savages. Neither sex nor age was spared. Women and children were tortured before being put to death. So great was the slaughter that Kolokotrones himself says that when he entered the town, from the gate to the citadel, his horse's hoofs never touched the ground. His path of triumph was carpeted with corpses.[8]

Another eminent British historian William St Clair in his book written in 1972, refers extensively to the faith of Turks in the 1821 rebellion. He states that the Turks who constituted the considerable population of Greece in 1821 disappeared totally and suddenly in the spring of 1821 and that the rest of the world ignored their disappearance. When criticizing this pretend ignorance, he explains his sadness and states that the Turks "were killed deliberately, without qualm or scruple, and there were no regrets either then or later."[9] In his book, William St Clair did not hesitate to openly describe the torture of Turks with frightening detail. Apologizing to the readers for its disturbing content, I present below a passage from these parts of the book:

Upwards of ten thousand Turks were put to death. Prisoners who were suspected of having concealed their money were tortured. Their arms and legs were cut off, and they were slowly roasted over fires. Pregnant women were cut open, their heads cut off, and dogs' heads stuck between their legs. From Friday to Sunday, the air was filled with the sound of screams before Colocotroness (added by author: Konstantinos Kolokotronis, a Greek highwaymen-klepht- leader) called a halt. One Greek boasted that he personally killed ninety people. The Jewish colony was systematically tortured. About two thousand prisoners, mainly woman and children were stripped are driven to a valley outside the town and then killed. For weeks afterwards starving Turkish children running helplessly about the ruins were being cut down and shot at by exultant Greeks... The wells were poisoned by the bodies that had been thrown in. Soon plague broken out and spread so virulently that during the rest of the war the Peloponnese was never free of it.[10]

Referring to the above quote, it should be noted that many Jews were fell victim to persecution and massacre by Greek brigands in Tripolitsa since the Jews were considered by the Greeks as the allies of the Turks.[11]

On the other hand, according to the Turkish Cypriot historian Salahi Ramadan Sonyel who is known for his extensive studies in the British archives, ex- British army officer Colonel Thomas Gordon who served in the siege of Tripolitsa to assist the Greeks, strongly protested the massacre by the Greeks after the town seized.  He then retired himself from the service. Also, Wilhelm Boldemann, a German philhellene doctor, who was helping the Greek terrorists, could not bear witnessing these scenes, took his own life by poisoning himself.[12]

The massacre can also be confirmed from Greek sources today. Especially diaspora sources praise the Tripolitsa massacre by claiming that Turks deserved it.[13] This, in their minds, is not surprising since the Greek diaspora played a significant part in the radicalization of the Greeks in the Ottoman Empire and thus contributed to the Tripolitsa Massacre. Even today, the Greek diaspora plays a significant role in the rise of far-right sentiment in Greek society.

William St Clair describes what had happened in Peloponnese in 1821 as genocide. He states that "The orgy of genocide exhausted itself in the Peloponnese when there were no more Turks to kill."[14] This short sentence succinctly explains what happened in 1821 and how the Turks in Greece were exterminated. Despite the strong influence of philhellenes in academic circles who constantly spread hatred against the Turks, the fact that William St Clair wrote these sentences in 1972 is a brave and fair approach.   In fact, Roderick Beaton, a Koreas Professor of Modern Greek and Byzantine History Language and Literature at King's College London, in the introduction chapter he was written for the new edition of William St Clair's book in 2008, draws attention to this courage and states the following:

The author's justice is meted out even-handedly among the main contestants. Drawing on often horrific firsthand accounts by foreign philhellenes, he balances the often-told tale of Turkish atrocities perpetrated upon Greek Christians with evidence for equally brutal and equally indiscriminate behavior on the Greek side. If these passages do not do comfortable reading for today's armchair philhellene, or indeed for Greek readers brought up on the national historiography that was standard until the 1980s, it is more courageous of St Clair to have included them.[15]

Turkey was often the victim of false news especially published in the western media. This includes US, German, and French media.[16] The British media has been much subtle about the victimization of Turkey. Yet, they also have contributed to the Fake News list against Turkey. On top of the list has been BBC. The latest example is regarding the "1821 Celebrations" of Greece. The Commentary/News entitled "How did Greece become independent, what happened 200 years ago?" published in BBC News/Turkish seems to be designed to implicitly exonerate the Greek terrorists from their responsibility for what had happened in 1821. This commentary, like in the tactics used in Hybrid Warfare through fake news, willfully misrepresents what had happened then, hides the truth, and puts the primary responsibility of the massacres in 1821 on the Ottoman Turks.[17]

One can observe this attempt of misinformation from the "Mutual Massacres" sub-title of the commentary. Neither the commentary/news nor any referenced source provide any detailed information for "mutual massacres" in the southern region of Greece. In fact, as stated above, even the most far-right elements of Greek society do admit proudly that the "Muslim citizens" of the region were exterminated. The commentary/news makes mention of priests being killed and churches being burned. However, no credible sources are cited for these claims. In this context, the claim of "mutual massacre" hangs in the air.[18]

Within the framework of the above, it is possible to say that the news/commentary written on the independence of Greece is a publication with the character of "fake news," which can be placed within a larger ecosystem of misinformation and disinformation. Such news is not only harming the solidarity in western alliance, but also bears the character of "outcasting" Turkey in the western world. NATO members and the EU partner countries should be aware of their own faults before blaming others for misinformation and fake news. These types of news/comments bring more division to the western world than unification. Nowadays, it is beneficial for all of us to keep this point in mind.

[9] William St. Clair, That Greece Might Still Be Free: The Philhellenes in the War of Independence (Cambridge: Open Book Publishers, 2008), 1.

[12] Sonyel, “How The Turks Of The Peloponnese Were Exterminated During The Greek Rebellion,” 128.

[14] St. Clair, That Greece Might Still Be Free: The Philhellenes in the War of Independence, 12.