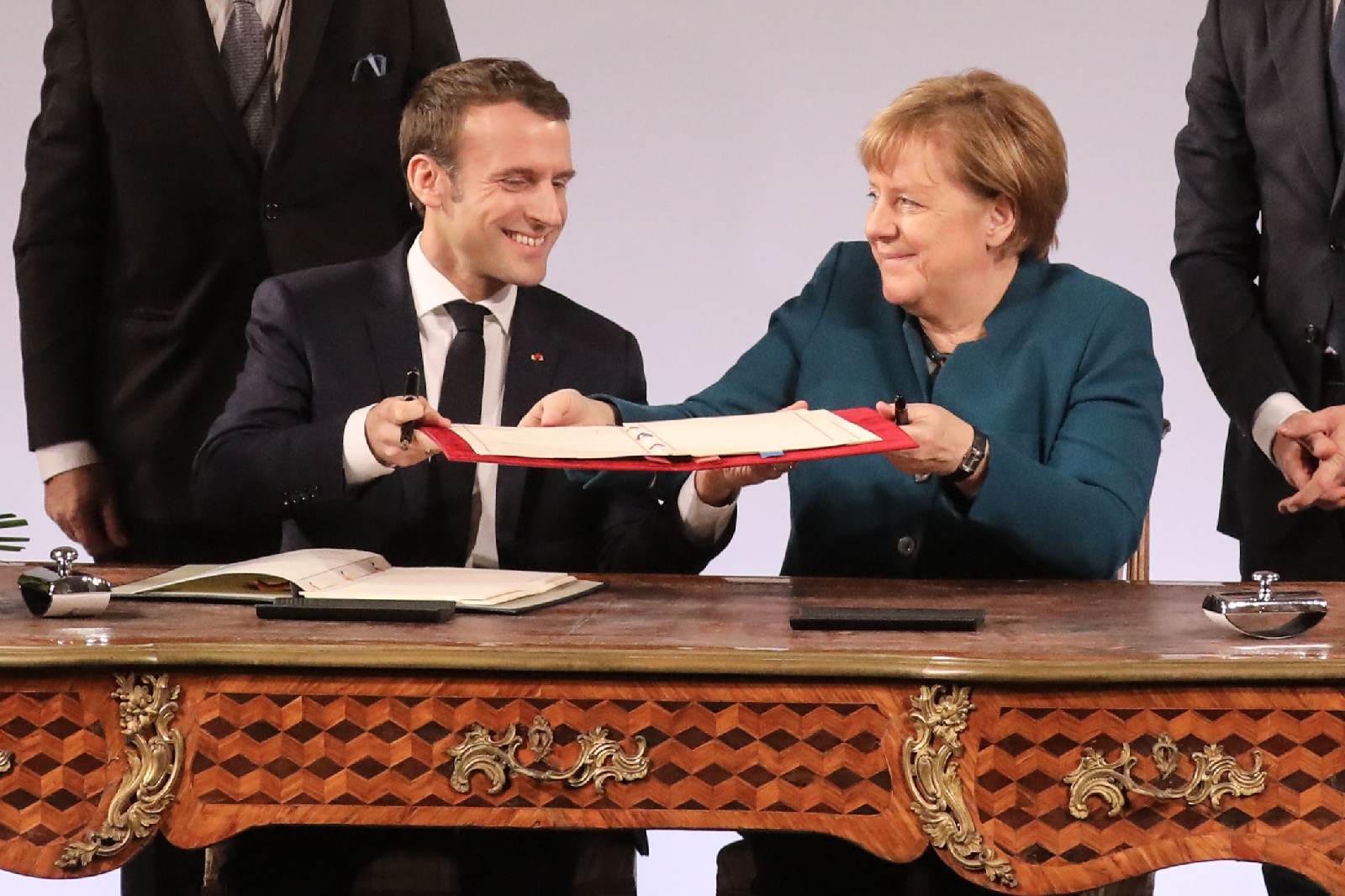 As is known, French President Emmanuel Macron and German Federal Chancellor Angela Merkel signed on 22 January 2019 a new “Treaty on Franco-German Cooperation and Integration” in Aachen. Chapter 3 of the Treaty bears the title of “Culture, Education, Research and Mobility.” Article 9 of Chapter 3 refers to integrated cultural institutes. The said article is as follows:

“Both states recognize the decisive role played by culture and the media in strengthening the Franco-German friendship. As a result, they are determined to create for their peoples a shared space of freedom and opportunity, as well as a common cultural and media space. They develop mobility and exchange programs between their countries, in particular for young people within the framework of the Franco-German Youth Office, and define quantified objectives in these areas. In order to foster ever closer links in all areas of cultural expression, including through integrated cultural institutes, they are putting in place specific programs and a digital platform especially for young people.”[1]

According to the press statement made by the German Federal Foreign Office Minister of State for International Cultural Policy Michelle Müntering, in connection with the said Treaty, Germany and France have immediately announced on 22 January their intention to establish joint cultural institutes. The said press statement is as follows:[2]

“What began as a Franco-German vision has become reality today: together we are creating Franco-German cultural institutes, stepping up our cultural cooperation in third countries and shouldering responsibility for Europe.

With these joint cultural institutes, we are translating into concrete action our readiness to work hand in hand to shape Europe’s cultural future. The fully integrated institutes in Bishkek, Erbil [emphasis added by author], Rio de Janeiro and Palermo will show that European cooperation in the cultural sphere can only succeed if we overcome national divides and ensure that our institutions are closely interlinked.”

According to the background information provided by the German Federal Foreign Office, at the Franco-German Council of Ministers in July 2017, Germany and France agreed to establish at least ten new joint Franco-German cultural institutes by 2020. This means in practice that branches of the Goethe-Institut and the Institut Français will be amalgamated in an integrated local entity. The integrated institutions will have mixed bilingual staff headed by one individual, who will either be appointed by the Goethe-Institut or the Institut Français.

Press reports on the subject indicate that “in a second wave, further joint cultural institutes will be developed in Ulan Bator in Mongolia, Manchester in the UK, Pristina in Kosovo, Juba in South Sudan, and Mariupol in Ukraine”.[3] A partly integrated Franco-German cultural centre has already been operating in the West Bank city of Ramallah since 2004. Further centres on this model are planned for Atlanta in the US, Cordoba in Argentina, Glasgow in the UK, Minsk in Belarus, and Gaza in Palastine. It is mentioned in the aforesaid Art Newspaper that:

“In Turkey, Germany is working with the Institut Français, Dutch and Swedish partners and Turkish foundations. The German Foreign Office has approved funding of €1m towards new common cultural institutes in the cities of Gaziantep, Diyarbakir and Izmir. It says the locations are ‘quite deliberately selected as they are beyond the metropolises of Istanbul and Ankara’.”[4]

As was emphasized above, Erbil in Iraq is among the cities where the joint German-French Cultural Institute will be founded. The reason of selecting Erbil as a city where these amalgamated institutions will be located is quite intriguing. German Federal Foreign Office asserts that “[Erbil] has been selected as a location to demonstrate that beyond their cultural engagement, the two countries are keen to send a joint Franco-German message of hope and to signal their commitment to reconstruction in Iraq.” If the aim is to help in the reconstruction of Iraq, would it not be more logical to locate the amalgamated German-French institutions in Bagdad, the capital city of Iraq, where it will be easier to coordinate with the Iraqi government? Why are the amalgamated institutions planned to be established in Erbil, the capital of the Kurdish Regional Government of Iraq that is often locked into disputes with the central government and which made an illegal attempt at secession from Iraq in September 2017?

What are the origins of the Goethe-Institut and the Institut Français?

According to scholarly sources, there is a general belief that “the origins of the globally familiar presence of the British Council, the French, the Italian or the Goethe Institute, lie in the mission civilisatrice of European colonialism.”[5]

As far as France is concerned, at the end of the nineteenth century,

“French foreign policy attempted to compensate for the decline of France as major world power and used foreign cultural policy as a means to secure political and economic supremacy over the areas once belonging to the Ottoman Empire. The Alliance Française and Mission Laïque Française were established and they began to function as tools to increase the usage of French language and knowledge of French culture in the Middle East.” [6]

In the case of Germany, some systematic political support of German scientific and cultural institutions abroad had begun already before the foundation of the German state.[7] Germany achieved national unification rather late and thus left substantial ethnic communities outside her national space and had a significant number of expatriate communities due to emigration. These extra-territorial ethnic communities were targeted by the All-German School Association for the Preservation of Germanhood Abroad (Allgemeiner Deutscher Schulverein zur Erhaltung des Deutschtums im Auslande, 1881)  and later by the Verein fur das Deutschtum im Ausland.[8]

France had taken the first steps as early as 1909, by setting up “the Bureau des écoles et des œuvres to coordinate the various cultural agencies operating abroad, and starting international network of Cultural Institutes, assigned with the task of promoting awareness and appreciation of French art abroad.”[9] In this respect, the first French Institutes were established in Florence and London, in 1910, and by 1936. Then in 1923, the French Ministry of Foreign Affairs established the first office for cultural diplomacy.

As to Germany, after the First World War, the profile of foreign cultural policy underwent change, its importance grew and foreign cultural policy was recognized as one of the few remaining political tools that Germany could still use to secure influence within the new political world-order. It is in such a context that within a decade after the end of the First World War, an organized state-funded foreign cultural policy emerged in Germany, as a combination of state institutions like the Cultural Department and state-financed private organizations. These private organizations such as the Deutscher Akademischer Austauschdienst (DAAD), the Alexander-von-Humboldt-Stiftung and the Deutsche Akademie were all established in the early 1920s. The foundation of Deutsche Akademie was led by the idea that cultural propaganda that targets an international public could rebuild German prestige and win sympathy for the weakened country. The founders of Deutsche Akademie originally laid weight on the construction of an organization for German cultural propaganda and ‘a center of Germandom’ in the service of an all-German-folk consciousness. Then, under the Nazi regime, the Deutsche Akademie expanded to become the most important cultural propaganda institution of the Third Reich.[10] After the Second World War, in August 1951, the Goethe Institute was founded in place of the disbanded Deutsche Akademie and the worldwide network of Goethe Institute branches were subsequently established.[11]

In fact, the Goethe Institute might be considered today as the part of the Ministry of Foreign Affairs of Germany. Articles 2 and 4 of it is Basic Agreement provide the details of this relationship:[12]

(1) The Foreign Office and the Goethe-Institut shall work closely together on the implementation of the contractual duties. They shall require their diplomatic staff and employees to cooperate loyally with one another.

(3) The Goethe-Institut shall regularly report on its work (in particular in its annual reports) and on measures and other incidents which influence cooperation or relate to the responsibilities of the Foreign Office in the field of cultural policies and public relations abroad.

Germany and France with this joint initiative claim that they are “shouldering responsibility for Europe” for cooperation in the cultural field. It is known that the European Union National Institutes for Culture (EUNIC) was established in 2006.[13] It is a Brussels based network of European national institutes of culture and national bodies engaged in cultural and related activities beyond their national borders. EUNIC brings together organizations from all EU member states and intends to pool together the resources and expertise of its members for carrying out joint work on common areas of interest. As such, no proper reason has been publicly given as to why Germany and France have decided to establish a joint cultural institution when a Europe-wide one already exists.

France and Germany, similar to their French-German based European Army, are setting aside the other EU members and joining their forces in the foreign policy under the guise of cultural cooperation. As it was explained above, these cultural institutions are in fact the effective tools of their foreign policy. It is not surprising that they are starting this mission from the city of Erbil in Iraq. It seems likely that we are about to witness ugly scenes reminiscent of 19 and 20th century imperialism.

[10] Varga, “The Marketization of Foreign Cultural Policy: The Cultural Nationalism of the Competition State.,” 444–45.

[13] “About Us,” European Union National Institutes for Culture, n.d., https://www.eunicglobal.eu/contacts.