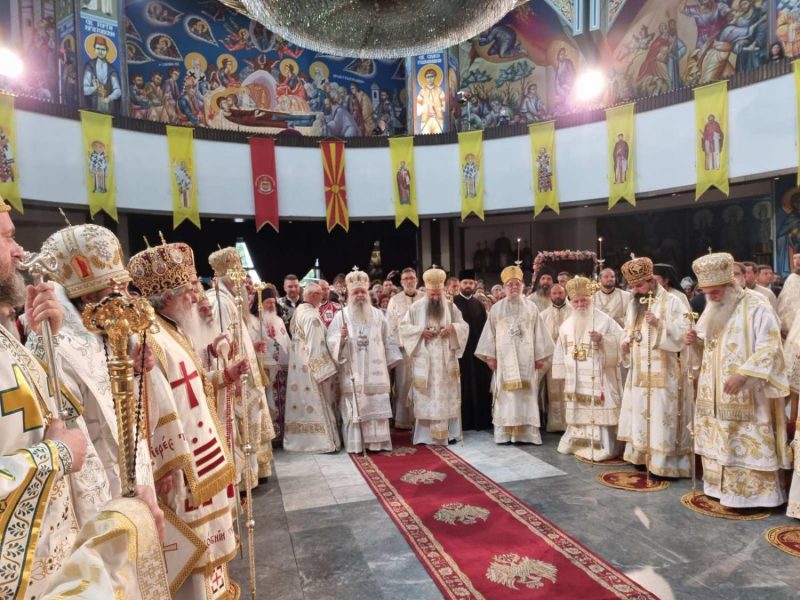 Recent fluctuations in the Orthodox world are worth noting in this regard. Churches affiliated with the Moscow Patriarchate are drifting away from their center one by one. In truth, Eastern Christianity, or Orthodoxy in particular, is not a structure calling for international religious unity. On the contrary, it is a faith system that nurtures and supports national identity and holds that if this identity does not have a state, it cannot have a church, and if it has a state, it must thus have a national church. The church is in fact an institution that supports its state in creating national identity. Therefore, if the state becomes independent, the affiliated church also becomes independent. This is the typical characteristic of Orthodox churches. Today, since reshaping national identity is among topical concerns, inter-church disputes in Ukraine, Northern Macedonia, or Montenegro, just like in Lithuania and Estonia, create an environment suitable for machinations.[1] Essentially, there is a rivalry between creating renewed national identities or new generations with Western cultural codes and preserving national identities that hold onto traditional perceptions. This rivalry is an element of the struggle for power between Russia and the US that includes serious, deep, long-term, visible and partially invisible goals. Social engineering is targeting identities and perceptions. Religion and faith are, in turn, important tools in managing these perceptions and shaping identity.

The churches in Ukraine that had remained Russia-affiliated getting ready to split from Moscow, the Greek Patriarchate of Istanbul (Phanar/Fener Greek Patriarchate) recognizing the Archbishopric of Ohrid that is under the jurisdiction of Serbian Orthodox Church and its transfer of the Ukrainian churches in Australia to its own jurisdiction are amongst the significant recent developments.

The Split from the Moscow Patriarchate

The most recent development has been on 27 May 2022 with the Russia-affiliated Ukrainian Orthodox Church announcing that is splitting from the Moscow Patriarchate due to Russian Patriarch Kirill’s stance on the war.[2] Kirill had blessed the Russian military forces that occupied Ukraine and avoided condemning attacks on civilians. Although the Moscow Patriarchate declared that it was not officially notified about the split, half of the bishops affiliated to the Ukrainian Orthodox Church had already stopped commemorating Patriarch Kirill in their prayers. Not commemorating the patriarch during services is the first step of a church-split. During the ceremony held at the Ukrainian Orthodox Church on 29 May 2022, the Metropolitan Onufriy commemorated Kirill's name in third place after the Patriarchs of Antioch and Jerusalem, but without using the phrase "our great master and father", which he had previously used. At the same time, no mention was made of Greek Patriarch of Istanbul Bartholomew, who approved the separatist Kyiv Orthodox Church, or the leaders of the Orthodox Churches of Athens, Cyprus, and Alexandria who recognised this decision.[3] Therefore, it can be argued that the Ukrainian Orthodox Church has not yet changed its position completely in terms of inter-church relations.

The Moscow Patriarchate held an extraordinary council meeting, followed by a decision in which it "expressed all its support and understanding to the Archbishop, bishops, monasteries, priests and non-priests of the Ukrainian Orthodox Church who were subjected to unprecedented pressure from local authorities, media, extremist organizations, and nationalist parts of the country", reminded that any changes to the statute of the Ukrainian Orthodox Church should be submitted to the approval of the Moscow Patriarchate, emphasized that Russian Patriarch Kirill deeply empathized with everyone affected by the war, called for the prevention of the casualties of civilians, and the delivery of humanitarian aid to those affected including refugees.[4] Although the Moscow-affiliated Ukrainian Orthodox Church seems to have not changed its position for the time being, this change will eventually take place as the criticism by the bishops and priests who form and sustain the Church against the Moscow Patriarchate begins to propagate. Therefore, a split has begun in the Ukrainian Church under the Moscow Patriarchate as well. With the split of the Kyiv Church, the Moscow Patriarchate had already lost 40% of its parishioners in Ukraine. Now, it is about to lose half its remaining parishioners. With the change in the church structure, the parishioners' idea of friends/enemies, threats and sympathy will also change, and the perception of national identity will be renewed accordingly. Therefore, this indicates a great geopolitical defeat and soft power loss for Russia.

Kirill's attitude is also problematic for faith groups within Russia.[5] The perception that regards the Ukrainian people as a part of the Russian nation regards the war as fratricide and that the Church approves this fratricide. Churches around the world (especially those in the Western parts such as Estonia and Lithuania) that adhere to the spiritual authority of the Moscow Patriarchate are also similarly disturbed by this situation. In fact, a sizable church consisting of Ukrainian, Russian, and Eastern European immigrants located in Udine in the northeast of Italy left the Moscow Patriarchate and announced that they would be under the Fener Greek Patriarchate from then on. It can be said that the Russian churches in the diaspora will gradually cut their ties with Moscow and enter into a spiritual hierarchical relationship with the Fener Greek Church the West considers as appropriate. It should be underlined that the psychological warfare carried out through the press and politically against Russia is the main determinant in this situation. As a matter of fact, Western media spreads comments which directly target the Moscow Patriarchate, and declares that Russian Patriarch Kirill supports Putin's war, that he is the main supporter of Putin’s ideology, that Kirill is from the KGB, and that the Church acts as the propaganda machine of the state.[6] It seems that the way for the Russians living in the western countries to maintain their peaceful life is to disassociate themselves from the vilified Putin and Kirill, and to either change the churches they are associated with or to cut their churches’ ties with the Moscow Patriarchate.

It should also be noted that the effort to link European Orthodox churches to a single center is nothing new. 10% of the total EU population identify themselves as Orthodox Christians.[7] Half of the 300 million Orthodox population consists of Russians affiliated with the Moscow Patriarchate, some of whom live in Western countries and continue the services within their own churches. A similar initiative is the effort to create a European Muftiate for the management of Muslim communities from a single center. Considering that the current population of Muslims in Europe is 44 million, it is understood there is a desire to connect religious/faith groups to controllable contact centers in order to ensure stability. This project is not new, but Russia's attacks are having an accelerating effect on these initiatives.

Reshaping the Orthodox People in the Balkans

The Fener Greek Patriarchate, by its decision of 9 May 2022,[11] declared that the Ukrainian communities and parishioners under the authority of Metropolitan Anthony of Hierapolis would then be under the authority of the Australian Archdiocese and Archbishop Makarios[12]. In other words, six churches under the Kyiv Church were transferred to the governance of the Australian Greek Orthodox Church under the Fener Greek Patriarchate. This decision emphasizes that the Patriarchate has never recognized Metropolitan Filaret (Filaret Denysenko) as either “Kyiv Patriarch” or “Kriv Patriarchate”, and states that Filaret cannot establish a Vicariate (regency) in Australia. Therefore, the jurisdiction of the Australian Archdiocese will also apply to Ukrainian communities in Australia. This means that the Fener Greek Orthodox Patriarchate has added Ukrainians as its parishioners alongside the Greek communities living in Australia. Indeed Fener Greek Orthodox Church's parishioners, which accept the religious authority of this church, are essentially made up of the Greek diaspora spread around the world and the communities living in the northern parts and on the islands which were later connected to Greece. Now, Ukrainians have been incorporated into this circle. Ukrainians were previously under the religious authority of the Moscow Patriarchate. The split of the Kyiv Church from the Moscow Patriarchate was achieved by being transferred to the Fener Greek Patriarchate. With the new developments, the circle has been expanded and the diaspora under this church has been directed to the Fener Greek Patriarchate. It is likely that a similar situation will be the case for some 40 churches in Western Europe and other Ukrainian diaspora churches. However, it was initially assumed that Ukraine would have its own national church which would be granted autocephaly/independence like it was the case for the Greek Church in 1833, the Bulgarian Church in 1870, the Serbian Church in 1879, and the Romanian Church in 1885. With this decision, it is implied that Metropolitan Filaret's struggle to make the Ukrainian Church autocephalous will bear no result. Thus, it can be said that Filaret could not attain his goal and instead became a pawn in a design, in a new order.

Competition between the churches in terms of determining authority and jurisdiction has become much more evident in the final phase of the power struggle between the US and Russia. If the struggle of the US against Russia is examined through the Churches, it can be said that the field of authority of the Russian Church in the West has been weakened. The decision taken by the Russian Orthodox Church Council on 29 December 2021 to create the Autocephalous African Exarchate shows that the changes in the geography of religion will be extended to Africa as well. This time, the Russian Patriarchate is establishing churches in the jurisdiction of the Patriarchate of Alexandria. While the new world order is being formed, the spiritual centers of the parishioners and the inter-church relations are being reconstructed.

The use of the Fener Greek Patriarchate in the design of the geography of religion is itself a problem. The Fener Greek Patriarchate is a Turkish institution subject to the laws of the Republic of Türkiye. It solely exists to meet the religious needs of the people of Rum heritage (Turkish Greek) in Istanbul. In fact, Türkiye's responsibility is only to ensure that the religious freedom of its minorities is met. In terms of the Treaty of Lausanne, the Fener Greek Patriarchate’s status is no special different from the Turkish Muftiates (in fact, the Grand Muftiate) in Western Thrace. The Fener Greek Patriarchate acts contrary to the conditional permission that it was granted for remaining in Türkiye by trying to transfer the spiritual leadership of the Orthodox World (with the exception of Russia) to Türkiye and Istanbul. The Patriarchate's legal status is not suitable for such a positioning, and this will transfer the pressure to change its legal status onto Ankara. Undoubtedly, this push will also challenge Türkiye's regulations and values related to secularism. The Fener Greek Patriarchate seeks a status that it had neither in the Byzantine nor the Ottoman period; at every stage of its history, its jurisdiction could only span as much as the borders of the state it was in. Today, to acquire an unprecedented position, it meets with state officials from Ukraine, Macedonia, and Montenegro and voluntarily joins projects by the US and the EU. Türkiye has no obligation, responsibility, or duty to ensure that Western Orthodoxy is governed from a single center. Moreover, the Patriarchate, which has the status of an archbishopric, has no right to place Türkiye under such a big burden.

[5] According to PEW Research Center data, 71% of the people in Russia and 78% of the people in Ukraine identify themselves as Orthodox. Please see; “Split between Ukrainian, Russian churches shows political importance of Orthodox Christianity", 14 January 2019, https://www.pewresearch.org/fact-tank/2019/01/14/split-between-ukrainian-russian-churches-shows-political-importance-of-orthodox-christianity/

[7] For the Eurobarometer study titled "Discrimination in the European Union" conducted in May 2019, please see; https://europa.eu/eurobarometer/surveys/detail/2251

[8] "Phanar: Yes to the recognition, no to “Macedonia” for the Archdiocese of Ohrid", Orthodox Times, 9 May 2022, https://orthodoxtimes.com/phanar-yes-to-the-recognition-no-to-macedonia-for-the-archdiocese-of-ohrid/

[9] "Patriarchate of Serbia recognizes the autocephaly of Archdiocese of Ohrid", Orthodox Times, 24 May 2022, https://orthodoxtimes.com/patriarchate-of-serbia-recognizes-the-autocephaly-of-archdiocese-of-ohrid/ ; "Ecumenical Patriarch: The Concelebration in Belgrade is a great event", Orthodox Times, 23 May 2022, https://orthodoxtimes.com/ecumenical-patriarch-the-concelebration-in-belgrade-is-a-great-event/

[11] "Archbishop Makarios receives Ecumenical 'vote of confidence' to take Ukrainian parishes under his wing", Neos Kosmos, 13 May 2022, https://neoskosmos.com/en/2022/05/13/news/community/archbishop-makarios-receives-ecumenical-vote-of-confidence-to-take-ukrainian-parishes-under-his-wing/ ; "Archbishop Makarios of Australia is the shepherd of all Ukrainian parishes in Australia", Orthodox Times, 9 May 2022, https://orthodoxtimes.com/archbishop-makarios-of-australia-is-the-shepherd-of-all-ukrainian-parishes-in-australia/