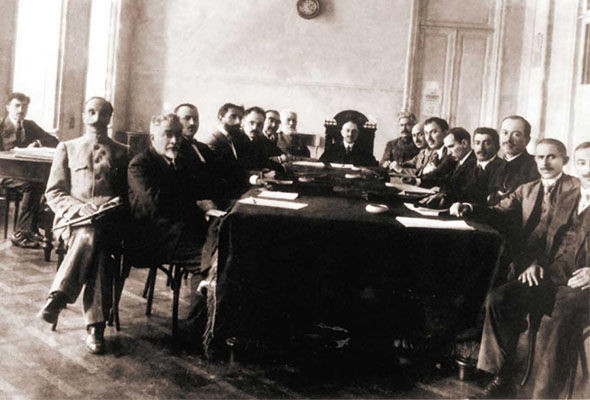 The end of the First World War witnessed not only great stories like the dissolution of four empires or the establishment of the League of Nations, but also is remembered with not broadly known memories of the small states appearing and acting in the international sphere in a very short period of history.

Tiny in a global scale, but crucial for the regional realm, the appearance of new actors in the Caucasian region following the downfall of the Tsarist Russia conveys saliency not only on the historical domain, but also can be availed for perceiving the contemporary events ongoing in their successors established in 1991. Considering that Azerbaijan, Armenia and Georgia – three independent states of the South Caucasian region – regarded themselves as the successors of the Republics established in 1918, the footprints of the predecessors cannot be overlooked during the evaluation of the current relations in the region.

This article aims to touch upon one of those significant but once “ignored” and even “prohibited” stories of the early 20th century that influenced tremendously the fate of a nation even after a century. It should be emphasized that the stories were not ignored merely by great powers of that century, but were also cautiously kept hidden from the relevant nations for almost seven decades during the Soviet regime.

The establishment of the Azerbaijan Democratic Republic (ADR) on 28th may, 1918 is the main theme of this research. In the first part of the article the general geopolitical scenes in Caucasus of the early 20th century will be tried to be described in order to understand the situation that gave rise to the birth of new states. Later, the salience of Azerbaijan Democratic Republic in terms of the values it supported, struggle for recognition, relations with regional and international agents will be emphasized. In the last part of the research, the demise of ADR will be discussed through evaluating the events reflecting the analogies existing in recent history of South Caucasus.

Geopolitical situation in the Caucasus at the early 20th century. The birth of new states.

Decades long industrialization concluded with the modernization and militarization of great powers that ultimately resulted with the outset of the first greatest war in the world among the major powers. In this politically, economically, and militarily critical timeframe the effects of modernization were discerned on the societies of big empires which maintained the superiority over the small nations for centuries.

The war frazzled all participants, both winners and losers. It was costly for all, and Tsarist Russia was not an exception. Russia starting from the early years of the 20th century turned into a fertile platform for the nations longing for the emancipation from the chains imposed by the empire. Certainly it allowed the local intelligentsia to grow its prestige and to enter into political life from which it was banned for decades. New parties were established, number of the members from other nations increased in the Assemblies and even in the army. Indeed the basis for the structures of the new states had begun to be formalized even when the strength of Tsarist Russia was not yet damaged by the involvement in the war.

But the war assiduously demolished already exhausted empire and the monarchy of Romanovs fell in February, 1917. Majority of the local intelligentsia in the Caucasian region agreed on the need to find paths for self-determination.  The elite of Caucasian nations decided to come up with the conclusions about the future of the governance in the All-Russian Constituted Assembly arranged to be held by free and fair elections in November, 1917. The Musavat Party (Equality) from Azerbaijan, Dashnaksutyun Party from Armenia and Mensheviks from Georgia acquired majority in the election. These groups later formed Transcaucasian Commissariat that would turn into the Transcaucasian Seim after the dispersal of All-Russian Constituted Assembly following the Bolsheviks’ October Revolution in 1917. The situation culminated with the Brest-Litovsk treaty signed between Russians and Ottomans that brought along disputed territory problems between Russia’s previous satellites and the Ottoman Empire. By signing this treaty, Tsarist Russia relinquished its legitimacy in the eyes of Caucasian nations and it triggered them to establish the independent Democratic Federative Republic of Transcaucasia on the 22nd April, 1918.

But the life of this republic consisting of three Caucasian states was not long. Due to the internal disagreements and the controversial viewpoints toward the relations with the Ottomans, Georgia left the federative republic on 27th may with declaring its independence. She was followed by Azerbaijan and Armenia.

The independence of Azerbaijan Democratic Republic was declared in Tbilisi on 28th May, 1918, when the Bolsheviks still continued their dominance in Baku. In the “Declaration of Independence” Azerbaijani government sent to the foreign states along with the request of the international recognition pointed out the issues pertained to the territory and the governance style of the newly independent state:

Azerbaijan Democratic Republic was the first democratic state in the Muslim East. As the parliamentarian state, National Assembly of ADR started its first session in November, 1918. In line with the principles stressed in the Declaration of Independence only 80 out of the 120 MPs had Azerbaijani Turkish origin, the rest were from minorities living in the territories of Azerbaijan: 21 Armenians, 10 Russians, 1 German, and 1 Jew. Georgians and Polish though were in small numbers that impeded them from the right to vote, they were represented in the parliament by 1 man[2]. Declaration of Independence emphasized:

The first Republic of Azerbaijan was also the first country in the East giving rights to vote to the women. Considering that women’s suffrage was granted in the US in 1920, UK in 1928, France in 1944, in Switzerland in 1971 the step taken by the newly independent government deserves to be highly evaluated. The state officials consisting of the enlightened elite Mamed Emin Rasulzade, Alimerdan bey Topchubashev, Fatali khan Khoyski, Nasib bey Usubbeyov, Samed bey Mehmandarov, Aliagha Shykhlinsky, Sultan Medjid Ganizade, Khalil bey Khasmamedov, Ahmed bey Papinov, Shafi bey Rustambeyov and a number of others were getting prepared for independence for several years.

Besides the democratic actions realized on the governance system, the societal and cultural issues were also taken into consideration. First of all, the newly independent state in Azerbaijan regarded itself as a secular one. Moreover, it spent too much effort for ascending the quality of the society through education, by establishing the first university – Baku University (now, Baku State University) - in 1919, sending hundreds of students to the universities abroad (most of them could not return due to the establishment of Soviet regime), opening new libraries, cultural centers and clubs for rescuing once “blinded, deafened and muted” people under the Russian hegemony from ignorance and illiteracy.

The contribution of Ottomans to ADR

When ADR was established in Tbilisi, de facto it did not hold the territorial control over all parts of Azerbaijan. Especially Baku was under control of Bolshevik units. In order to regain Baku back from these powers Azerbaijan government requested assistance from the Ottomans, who were not oblivious to this appeal. The Caucasus Army of Islam under the leadership of Nuri Killigil (Nuri Pasha) came to Ganja in June, 1918[4]. Subsequently, Azerbaijan government in Tbilisi changed the headquarters and moved to Ganja. The liberation of Baku was achieved with success on 15th September, 1918 with the efforts of Anatolian and Azerbaijani Turks, Bolsheviks’ appeal of help to British units deployed in Iran or the formation of “Central Caspian Dictatorship” for maintaining control over the Caspian oil were in vain.

After the liberation of Baku, Azerbaijan government moved the capital there and started to involve more efficiently in the socio-economic life of the country. In this effort the members of the Caucasus Army of Islam also participated and provided assistance by not leaving the state after the military operation. They helped Azerbaijani government to form its own army. Ottoman Turks contributed a lot to peace and stability of the newly independent country be it fighting against illegal bandits or price rises. In the memoirs of old Baku residents this period of ADR is remembered with gratitude and respect.

Nevertheless, the Islamic Army could not stay in Baku longer due to the Armistice of Mudros signed in October, 1918 where Ottoman Empire admitted defeat of the World War I [5]. Some small units of Turkish soldiers were left in Baku for continuing the assistance even after the withdrawal of the army led by Nuri Pasha.

Regardless to all the problems in the internal domain, the ADR from its inception conducted an active foreign policy. The “Declaration of Independence” was communicated to almost all European states just after its adoption. The first friendship treaty was signed with Ottomans in Batumi. Later Azerbaijan government started preparations for Paris Peace Conference, seen by the government as a chance to acquire international recognition.

The special mission, led by Alimardan bey Topchubashov held meetings with representatives of European states firstly in Istanbul, on the way to Paris. Supreme Council of Allied Powers in Paris discussed the case of Caucasia’s newly independent countries in 1919, May. The unwillingness to see new and small actors in the international sphere made great powers to approach the self-determination of these nation with prejudice[6]. This kind of attitude certainly obstructed the diplomats’ work. In Paris Topchubashov met Morgenthau and Wilson on 28 May of 1919 that influenced positively the ultimate decision of the conference for de-facto recognition of ADR. This diplomatic success can be considered as one of the eminent accomplishments of ADR, but unfortunately the joy did not last long…

The fall of ADR

The will of Azerbaijan government to establish friendly relations with neighboring nations and states, was not met with the similar compassions especially from the Armenian side. Regardless to desisting from its rights on Erivan in order contribute to the regional peace and stability (this step is still considered as the biggest mistake of ADR) the Azerbaijan government soon got acquainted with “unsatisfied” and greedy face of Dashnak government in Armenia. Armenians started collective attacks on Karabakh distracting the attention of Azerbaijan Army in the period of Bolsheviks’ preparations of intrusion into Baku.

The Azerbaijani government did not have the strength to resist, that’s why they were obliged to accept the pretext of Bolsheviks for using the Azerbaijan territory to aid Kemalist movement in Anatolia. On 27 April 1920, Bolshevik Russia’s 11th Red Army invaded Azerbaijan and left it seven decades later.

The repercussions of the 100 years old “young” states in South Caucasus.

Comparative analysis of the late 1910s and early 1990s in the South Caucasus region brings up a similar picture. Collapse of another empire, release of new small states with a hope to escape from the cage occluded for 70 years, and the fear of nations not being able to get international recognition as in previous time.

Unfortunately, similarities do not end up with the portrait of the international system. The aggression of Armenia toward Azerbaijan, Russia’s unfinished lust in the region, the game the great powers play with the small states all are the same in the 21st century. That’s why the years between 1918 and 1920 is very important in order to understand the regional balance, values and intentions, success and failures of the states in Caucasus. Thus hanging on the history and not falling off like in 1920s was possible only because of learning lessons from the earlier failures of the former “young” states in the Caucasus. The nations blunted for centuries by the superior power tasted the “independence” firstly in that timeframe and seems that they never forgot it. The new Post-soviet states of Caucasus by referring to their historical heritage of late 1910s established and today successfully maintain their republics. .

Back to the main subject of the article, Azerbaijan Democratic Republic with its democratic, secular, tolerant stance provides a lesson to all small nations. For this reason, following the ideals and principles of the first democratic, parliamentarian republic of the East of one hundred years ago would solely bring great benefits to its successor of today.