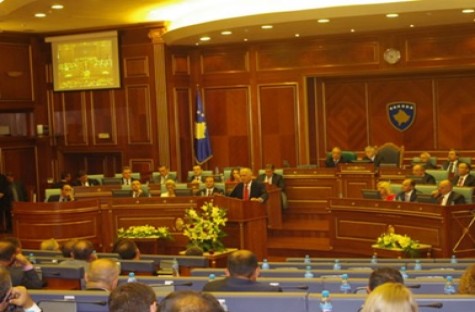 The parliament of Kosovo has amended the Kosovar constitution to allow the creation of a special court to investigate alleged war crimes committed by ethnic Albanian fighters during the Kosovo Conflict[1] in the late 1990s.[2]

Kosovo's chief diplomatic and financial backers, the United States and European Union, have lobbied hard for Kosovo to address the accusations, and were disappointed by Kosovar parliament's 'No' vote last month.[3] The Parliament approved a law on the establishment of the special court for war crimes by providing two-thirds majority in the third voting conducted in this year.

Thus, 16 years after the conflict, a special court for war crimes will be established in Kosovo and will examine the claims put forward by former member of the parliamentary assembly of the Council of Europe, Swiss prosecutor Dick Marty regarding the Kosovo Liberation Army (KLA)[4] war crimes.[5] In 2010, the report by Dick Marty to the Council of Europe (CoE) accused the KLE of abductions, murders and illegal organ sales. KLA allegedly targeted Serbian and Roma minorities, as well as Kosovars who opposed the KLA.[6] Moreover, last year, the former prosecutor of the EU's Special Investigation Task Force, Clint Williamson, stated that he found evidence of at least ten civilians being killed for organ harvesting, and was ready to file a lawsuit against top former KLA members and some current top politicians. However, Williamson refused to give any names of those he suspected of the alleged crimes as investigations were on-going.[7]  The voting on the resolution on this issue a second time in the last two months is shown as a sign of the international pressure for the establishment of special court in Kosovo.

The new court, expected to start working early next year, would be part of the Kosovo judicial system, but sensitive proceedings would be handled abroad, most likely in an EU member state.[8] All of the judges will be non-Kosovars, but will apply Kosovar law.[9] Furthermore, the proceedings of the court will paid by the EU.

The Parliament of Kosovo was bitterly divided over the creation of a court to try war crimes committed by the KLA. The international community, however, insists that it must be established, with or without the approval of Kosovo’s own institutions.[10] In addition, in terms of today, the upper echelons of Kosova’s state institutions are constituted in part by former members of KLA. As such, the creation of a war crimes court has been criticized by opposition MPs, who regard such moves as a compromising of Kosovo’s sovereignty. Furthermore, members of the opposition have taken the constitutional amendment regarding the special court to the Constitutional Court of Kosovo. They want the Constitutional Court to annul the amendment.[11]

“This process will move us forward together”, said the Kosovar Foreign Minister Hashim Thaci. “Without political differences and at the same time with very close cooperation with the United States, the European Union and NATO. Therefore esteemed lawmakers, I call upon all of you to vote in favour of creating the special court.”[12] With such a statement, Thaci has aimed to maintain his pro-Western stance and has tried to increase Kosovo’s image as well as its legitimacy in the UN.

Many representatives of the international community have praised the decision of the parliament of Kosovo to give way to the creation of the special court.[13] This “is a crucial step in the provision of a necessary legal framework for addressing serious allegations,” the head of the European Diplomacy, EU High Representative Federica Mogherini said in a statement. “There were three expensive international justice organizations which failed to do exactly what the new tribunal is trying to do: the International Criminal Tribunal for the former Yugoslavia (ICTY), the United Nations Interim Administration Mission in Kosovo (UNMIK) and now EU Rule of Law Mission (EULEX)”[14] With such a statement, Mogherini implied that the new special court is meant to do away with the failures of the previous attempts.

However, the authorities in Belgrade remained skeptical, with the head of Serbian government office for Kosovo, Marko Djuric, said that his country will “only be satisfied once it sees the convictions. We still look with the certain amount of skepticism on the intentions of Pristina, but we remain ready to help those who want to convict (people who are guilty of) war crimes.”[15]

War crimes committed during the Kosovo Conflict have been prosecuted in the International Criminal Tribunal for the former Yugoslavia (ICTY), but relations between Serbia and Kosovo remain strained (as an additional note, Serbia does not recognize Kosovo as a sovereign state). Last month, 11 Kosovo Albanians were sentenced to prison for war crimes. In February 2014, Serbia's war crimes court convicted nine former paramilitaries for their involvement in the massacre of ethnic Albanians in Kosovo in 1999. Two former Serbian secret service officials were arrested under suspicion that they planned the 1999 killing of an anti-government journalist. In 2013 Amnesty International accused the UN Mission in Kosovo of failing to adequately investigate war crimes committed during the conflict.[16] It remains to be seen what kind of consequences that the special court will have for politics in Kosovo and its relations with Serbia.

* The picture is taken from: http://www.balkaninsight.com/

[1] “Kosovo Conflict”, Britannica, http://global.britannica.com/event/Kosovo-conflict ; an armed conflict that took place between 1998–99 during which ethnic Albanians fought against ethnic Serbs and the government of Yugoslavia in Kosovo.

[4] “Kosovo Liberation Army, Britannica, http://global.britannica.com/topic/Kosovo-Liberation-Army ; Kosovo Liberation Army (KLA) was an ethnic Albanian Kosovar militant group active during the 1990s that sought Kosovo’s independence from Serbia, which was one of the  republics in the federation of Yugoslavia.

[5] “From Dick Marty’s allegations to Special Court”, Kosovalive360, May 26, 2015, http://www.kosovalive360.com/from-dick-martys-allegations-to-special-court.html