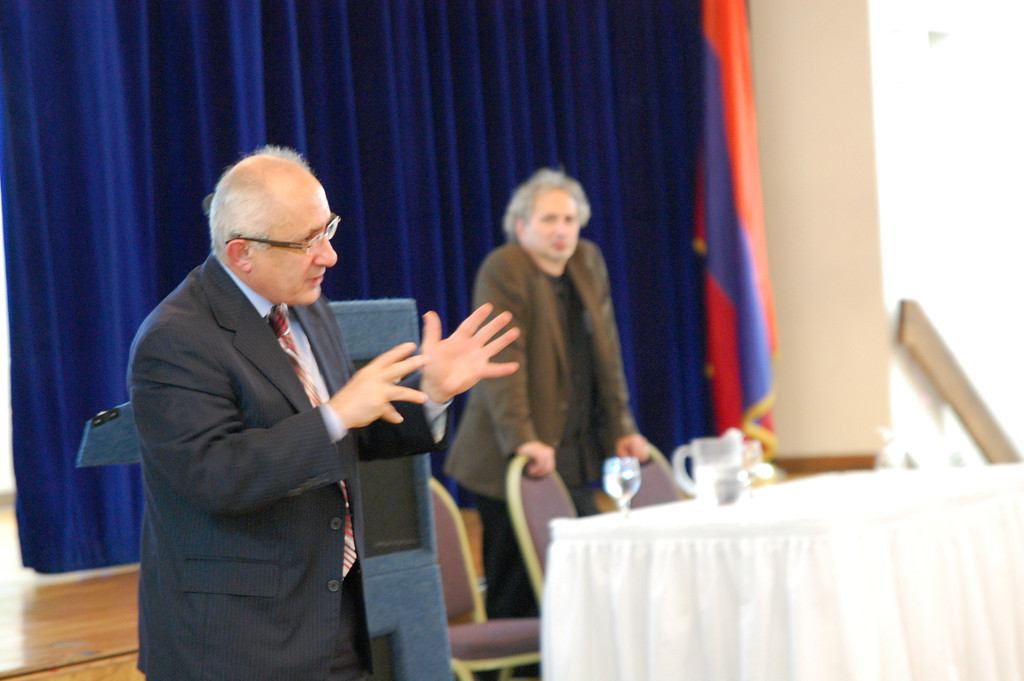 On 28 April 2017, an article by Taner Akçam titled Soykırımın Şifresi Çözüldü was published in the AGOSweekly (the same article was also published in English with the title Deciphered Telegram Reveals the Genocide). AGOS presented the article with the following statement: “Historian Taner Akçam deciphered the telegram by executive of Teşikilat-ı Mahsusa (Secret Organization) and Commitee of Union and Progress (CUP) Bahaettin Şakir dated July 4, 1915. The telegram is about coordination of deportation and annihilation of Armenians. The letterhead on the telegram proves that it is indeed original.”[1]

Akçam’s article and AGOS’ presentation is a striking example of how people like Akçam and media organizations like AGOS defend and propagate genocide claims.

The Turkish version of Akçam’s article consists of 797 words. Together with the intro of AGOS, excluding the title, it is made up of 837 words. The first paragraph, after an explanation that is 2.5 lines long (36 words; %4.5 of the entire article), provides a Turkish translation of the said telegram, which, according to Akçam, was sent for delivery to Harput Inspector of the CUP Nazım Bey. Akçam frequently refers to this telegram as “document” throughout the article. The translated telegram, together with Akçam’s explanations, consists of 34 words (% 4.3 of the whole article). As there is no information by whom the telegram was translated, we can assume that it was translated by Akçam. Why this information, although it might seem unnecessary at first glance, is important will be clearer below.

The rest of the article pertains to the claim of the telegram’s authenticity (547 words; %68.6 of the entire article), and to Bahaettin Şakir’s identity (151 words; %18.9 of the entire article). The concluding paragraph of the article, which consists of 40 words, claims that authenticity of the telegram is indisputable and that clearly shows that “CUP executives subjected Armenians to a systematic annihilation,” and suggests that “it's about time ending denialism which causes nothing but more and more harm.”[2]

As it can be seen, Akçam’s article, instead of its content, in other words, what is written in it, concentrates on the claim of the authenticity of the telegram, and Bahaettin Şakir’s identity. So much so that, particularly the excessive verbiage about the telegram’s authenticity is indeed a way for Akçam to divert readers’ attention away from the telegram’s content. This is a necessary effort for what Akçam is trying to do.

Akçam states that “in order to understand the document and its content better”, it is necessary “to mention Bahaettin Şakir's personality, duties and responsibilities”. Following this, again through excessive verbiage, Akçam states that Bahaettin Şakir was a central figure in Teşkilat-ı Mahsusa, that he “completely focused on annihilation of Armenians” after the failure of the Caucasus campaign, and that he was sentenced to death in his absence following the 1919-1921 Istanbul trials. However, while telling these, Akçam fails to mention that the 1919-1921 trials were conducted by the occupation forces in occupied Istanbul in a manner incongruent with legal procedures, or for what crime Şakir was sentenced to death. Akçam deliberately uses such narrative. As a matter of fact, Akçam tries to create a negative perception against Şakir and to construct a fertile ground for his claim via Şakir’s personality.

First of all, what Akçam should know is that a person’s personality cannot be the evidence of this person’s quilt on a specific matter. Modern law passes judgements on persons based on concrete and proven actions, not on personalities. Furthermore, if we follow Akçam and pass judgments on people based on their personalities, we can bring up many things about Taner Akçam that are embarrassing even to write.[3]

Furthermore, Akçam, by saying things such as “[Şakir] had a car and was using the codes of ministries of interior and defense,” leaves the readers wondering, for instance, what does Şakir’s car has to do with the issue at hand. What Akçam is actually trying to do is to distract readers and divert attentions away from the content of telegram attributed to Şakir, on which Akçam essentially bases his claim, namely, the systematic annihilation of Armenians.

As mentioned above, a good part of Akçam’s article (%68 of the article) is dedicated to “proving” the authenticity of Şakir’s telegram. The claims in these sections are about “technical” issues such as the letterhead on the telegram and the type of coding, and while writing about these “technical” issues, Akçam goes into unnecessary detail. Akçam talks about things that non-experts would not understand. While doing this, he again rambles on, both giving the impression that he says important things, and yet again diverting attentions away from the content of the telegram.

Then, what is written in the telegram, from which Akçam carefully diverts the attention of the reader, and which AGOS presents as a telegram “about coordination of deportation and annihilation of Armenians”? If we trust Akçam’s translation, the telegram reads as follows:

Are the Armenians who were deported from there being evacuated? Are the troublesome individuals whom you have reported as being exiled are being annihilated or merely sent off and deported? Please report back honestly.[4]

Akçam and AGOS, mocking our intelligence, claim that this telegram is the proof of the “deportation and annihilation” of Armenians.

In this telegram, Şakir asks a question to learn about the situation in Harput. He wants to know whether the “troublesome individuals” have been killed or sent off. This telegram is in no shape or form an instruction, order, etc. If it was, Şakir would have said it clearly using an imperative mood.

Therefore, Akçam’s claim that this telegram proves that “CUP executives subjected Armenians to a systematic annihilation” can be nothing, but a speculation. However, Akçam presents the telegram as “clear proof”. This is an overt distortion. Moreover, generating ideas about a major and important event such as the 1915 events based on a single telegram, to put it mildly, is carelessness and, to put it bluntly, maliciousness. Besides, if we are to interpret this telegram, it is possible to deduce that Şakir learned that some unwanted massacres had taken place in Harput, was bothered by it and wanted to inquire about the issue in order for the cessation of the massacres.

This publication of Akçam’s article may not be remarkable for those who follow Akçam and AGOS. Akçam is a person that has been showcased for the past twenty five years by certain circles supporting the genocide claims. AGOS, on the other hand, in recent years, hiding behind Hrant Dink’s name, has turned into the mouthpiece of these claims. However, this article of Akçam has a significance that will not go unnoticed by those who closely follow the issue.

For decades, great resources have been put into service to impose a popular genocide narrative. Within this context, “projects” have been developed, the typical example of which is Taner Akçam. To tell the truth, this campaign has, in fact, been effective. Those who have been trying to really understand the character, reasons and results of the 1915 events have been either influenced by the now hegemonic “Armenian narrative” or adopted this narrative considering pressures they faced or may face and/or the rewards that come with it. Others, on the other hand, have chosen to keep away from this issue.

Despite all of its power, however, the “genocide lobby” has not achieved its desired goal. This is because of the definition of the crime of genocide in the 1948 Genocide Convention. According to this definition, the crime of genocide is a series of acts, which are listed in the Convention as well, committed with intent to destroy, in whole or in part, a national, ethnical, racial or religious group. The critical point in this definition is the element of intent. This element must be clearly proved in a manner leaving no room for doubt. However, studies up to now have failed to prove the existence of the element of intent, which could allow the characterization of the 1915 events as genocide.

This is the exact problem of Taner Akçam and the other “projects” suffer from. Therefore, it is observed that they have recently increased their efforts to establish the element of intent, which is necessary to constitute the crime of genocide.

Within this framework, in October 2016, İletişim Yayınları published Taner Akçam’s book titled Naim Efendi'nin Hatıratı ve Talat Paşa Telgrafları - Krikor Gergeryan Arşivi (En. Naim Efendi’s Memoir and the Talat Pasha Telegrams - The Krikor Guerguerian Archive). In this book, Akçam labored hard to prove the authenticity of the “Andonian Documents,” which were previously presented as the proof of the CUP leaders’ intent to destroy Armenians, but was later proven to be forgeries by Şinasi Orel and Süreyya Yuca’s in their work titled Ermenilerce Talat Paşa’ya Atfedilen Telgrafların Gerçek Yüzü (En. The Truth about the Telegraphs Attributed to Talat Pasha) published in 1983. However, Akçam’s efforts was quickly proven to be futile; in the 55th issue of Ermeni Araştırmaları published in November 2016 (as well as in the 34th issue of Review of Armenian Studies), Ömer Engin Lütem assessed Akçam’s book and evidently proved that the book was based on manipulations and fabrications. Thus, it was proven not only that Akçam’s book published by İliteşim Yayınları is a waste of paper, but also that Akçam is devoid of academic ethics.

In this context, it should be also mentioned that a documentary by filmmaker Joe Berlinger titled Intent to Destroy was released in this April. The title of the documentary itself reveals what is aimed with this documentary.

Lastly, an article titled Sherlock Holmes of Armenian Genocide Uncovers Lost Evidence was published in New York Times on 22 April 2017. In this article, it was claimed that Akçam uncovered the “lost evidence” of the “Armenian genocide” or the “smoking gun”, in other words, the telegram ordering the destruction of Armenians, in an archive held by the Armenian Patriarchate of Jerusalem. The telegram mentioned in the New York Times article is the same telegram discussed in this article.

Ultimately, it is understood that Akçam and the other “projects” will concentrate their efforts on the propaganda that they have found the “smoking gun” of the “Armenian Genocide.” For this purpose, it is unfortunately seen that these “projects” have also seized control of media organs such as AGOS that is supposed to be the voice of Armenians in Turkey.

On the other hand, right off the bat, Akçam and the other “projects”, far from being Sherlock Holmeses, have once again been proven to be pathetic examples of Norman Stansfield.

[3] For the things said about Taner Akçam by his brothers, Cahit Akçam and Alper Akçam, see.

[4] Here again, the Turkish and the English versions of the article do not match.

[5]  Norman Stansfield is the corrupt police character in Luc Besson’s globally successful movie Léon: The Professional (1994) starring Jean Reno, which is commonly identified with its soundtrack Shape of My Heart by Sting.