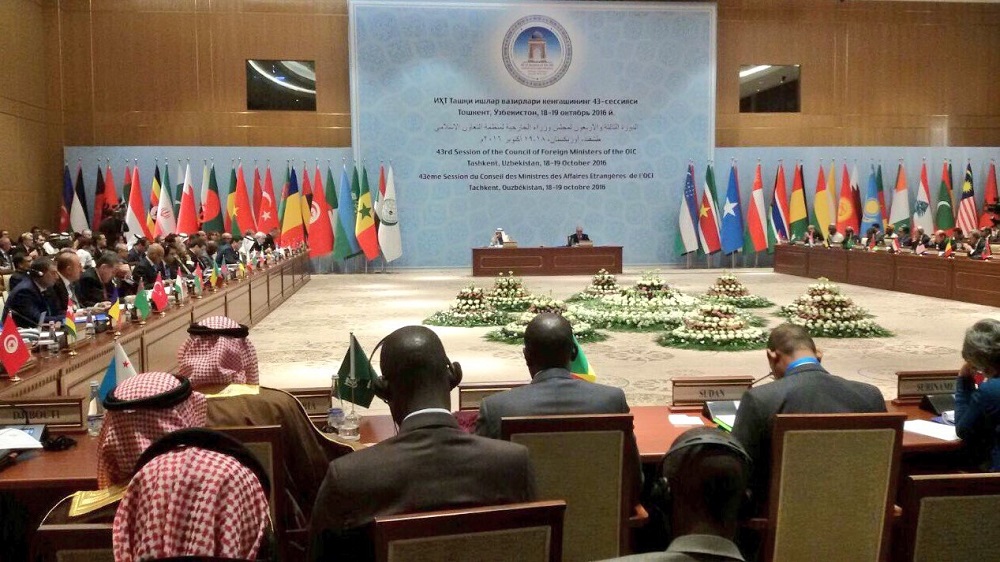 The Organization for Islamic Conference (OIC) was established in 1969 and the first summit was held in 1970 in Jeddah. OIC currently has 57 members and is therefore counted as the second biggest inter-governmental organization in the world after the United Nations. The charter of the organization was adopted in 2008, at the 11th Summit held in Dakar.[1] OIC has a Permanent Observer Mission to the United Nations in New York. OIC has 3 main bodies; the Islamic Summit, the Council of Foreign Ministers and the General Secretariat.

The Islamic Summit, also known as The Conference of Kings and Heads of State and Government, meets once in every three years and is the highest-level meeting during which member countries adopt policies for the next three years. Turkey held the chairmanship of the OIC Summit in 2016 as Turkey hosted the 13th of Islamic Summit Conference in İstanbul in April under the theme “Unity and Solidarity for Justice and Peace”. Previous summit, 12th Islamic Summit Conference, was held under the chairmanship of Egypt in 2013 under the theme “Muslim World: New Challenges and Expanding Opportunities”.

The Council of Foreign Ministers (CFM) meets once a year to discuss the progress made by the member countries and implementations of the policies. This year, Uzbekistan took over the chairmanship of the OIC Foreign Ministers Council after Kuwait and hosted the 43rd session in Tashkent in October 2016.[2]

The General Secretariat is the executive body of the OIC and is currently headed by Iyad Ameen Madani (Saudi Arabia), who assumes this duty in 2014.[3] Before Iyad Ameen Madani, Prof. Dr. Ekmeleddin İhsanoğlu (Turkey) held the Secretary General position between the years 2005 – 2013. On 31st of October, OIC declared Iyad Ameen Madani’s resignation from his post.

The 43rd session of the OIC Council of Foreign Ministers (OIC CFM) was held on October 18-19, 2016 in Tashkent. According to the news, besides the Foreign Ministers of the member countries, representatives of the United States, France, Italy, United Kingdom, Switzerland and representatives from different international organizations like the UN, OSCE, the League of Arab States, the Organization for Economic Cooperation, the Conference on Interaction and Confidence-Building Measures in Asia (CICA) attended the session.[4] Turkey is one of the active members of OIC and Foreign Minister of Turkey, Mevlüt Çavuşoğlu participated in the 43rd session and he addressed the Foreign Ministers of the member countries.[5]

This year, Uzbekistan took over the chairmanship of the OIC after Kuwait to pursue its duty until the 44th session that will be held in 2017. It has been declared that Uzbekistan’s chairmanship period will focus on “education, science, peace and development”.[6] Minister of Foreign Affairs of Uzbekistan, Abdulaziz Kamilov, draw attention to Uzbekistan’s priorities at this speech he delivered in Jeddah, at the 42nd Summit that was held in July 2015. While underlining the role of OIC in today’s world, he said the following in July 2016: “…In these conditions the significance of the OIC becomes more important in strengthening the tolerance, mutual respect of cultures, peace and accord both inside the Islamic world and among the representatives of various religions and peoples”.[7] He declared the theme of the upcoming session as “The education and enlightenment – path to peace and creativity” at his speech and juxtaposed the priorities of Uzbekistan’s chairmanship period in detail.[8] As one of the basic outcomes of the 43rd OIC CFM session, the Tashkent Declaration that has been signed includes political, economic, cultural, and humanitarian issues as well as OIC 2025 Programme of Action that was adopted at the 13th Islamic Summit held in İstanbul. Tashkent Declaration also paid particular focus on education and ongoing conflicts; offered to try to solve the current problems through dialogue and peaceful negotiations.[9] In addition, Uzbekistan focused on establishment of new institutions in on education in the capital city of Uzbekistan, Tashkent.

As a new development, this year, the OIC Ministerial Contact Group for Muslims in Europe gathered for the first time on the sideline of the 43rd OIC Session. The OIC Ministerial Contact ‎Group for Muslims in Europe was formed at the Istanbul Summit in April 2016. Members of the contact group include Turkey, Saudi Arabia, Pakistan, Algeria, Egypt, Somalia, Malaysia, and Jordan. Aims of the contact group are providing cooperation among relevant actors to “to lay out strategies to eliminate hate speech, physical assault, practices of intolerance, prejudice, racial discrimination and Islamophobia, and to support intercultural dialogue and social inclusion”.[10] As stated on the official website of the OIC, the platform also provides an environment for Muslims from different nationalities and backgrounds to exchange information and experiences in order to enhance and strengthen the inclusion of Muslim population in the political and social life in Europe. This can be an important step to tackle the issues of radicalization of and prejudice against Muslims of Europe (a hotly debated issue in today’s Europe), and further encourage the Muslims of Europe to be more active citizens in their communities, integrate with the society, and to take roles in the decision-making mechanisms. Furthermore, institutionalization of such a contact group is a good opportunity for the OIC to reach out the international community in addition to the citizens of the member countries and support the works to fight against radicalization.