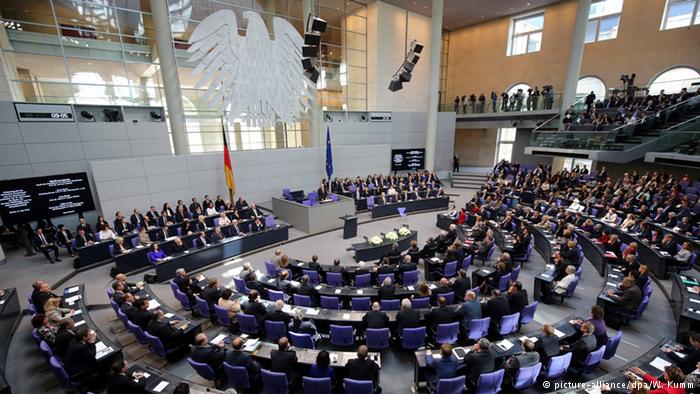 On June 2, 2016, the German Federal Assembly (Bundestag) adopted a draft resolution, which embraces the Armenian narrative and characterizes the events of 1915 as ‘genocide’.

The resolution, which reflects the one-sided Armenian narrative and distorts history with regards to the 1915 events, aims to burden the Turkish people with the crime of ‘genocide’. Apart from this partial, misleading and unfriendly approach, the resolution abuses the element of religious solidarity by claiming that other Christian minorities were also subjected to genocide. Furthermore, the resolution also calls on the federal states of Germany to include the ‘extermination of Armenians’ into the curricula and teaching materials of schools, universities, and political education – a move serving the institutionalization of hate speech.[1]

Germany’s interest in the 1915 events is not new. The German Federal Assembly had also previously adopted a resolution along the same lines in 2005, which did not include the word ‘genocide’, but was nevertheless accusatory of Turkey. Furthermore, especially last year, due to it being the centennial of the 1915 events, and in the beginning of this year, several draft resolutions, which included the term ‘genocide’ were brought to the agenda of the Assembly in various occasions. However, they were delayed due to conjectural reasons. The recently adopted resolution goes further than the resolution in 2005 in terms of both scope and practice.

It must be noted that important legal developments with regards to the events of 1915 have taken place since 2005 that demonstrates the error of such resolutions. Within this context, the ECHR’s Perinçek v. Switzerland case verdict and the verdict of the Constitutional Council of France’s verdict regarding the Gayssot Act are of particular importance. Both verdicts confirms that, unlike the Holocaust, the 1915 events is a subject of legitimate debate and that only a competent international court can decide whether an act amounts to genocide.

Furthermore, the verdict by the Court of Justice of the European Union in 2003 with regard to the G. Krikorian and Others v Parliament, Council and Commission case must also be mentioned.[2] This verdict confirms that parliamentary resolutions are declarations of political nature and have no binding legal consequences.

It is beyond doubt that Germany, as a country that has committed genocide in past, is well aware of the above-mentioned facts. However, it is clear that the German Federal Assembly adopted this resolution for the purpose of frustrating Turkey. The resolution has no constructive qualities; on the contrary, it is confrontational and provocative. It is clearly seen in the current conjuncture that the resolution was adopted based upon political opinions with regard to Turkey. It is understood that parliamentarians who voted in favor of the resolution, because of their negative opinions towards Turkey, thought that they could punish Turkey using a legally and historically controversial issue such as the events of 1915.[3]

It must be mentioned that in Germany, in general, far-right tendencies, sympathy towards Nazism, Islamophobia and Turcophobia are all on the rise.  Within this context, it is seen that there is an increase in publications in Germany against Turkey and the Turkish government, especially in the German media. In relation to this, there are reports that Turks in Germany were prevented by German media outlets from placing notices and publications in the media defending the Turkish perspective prior to the voting in the Federal Assembly.

Parliamentarians who voted in favor of the resolution have clearly acted in an unfriendly manner. They also paved the way for a resolution that is offensive towards Turks living in Germany and that will lead to them being further discriminated. On the other hand, it must be noted that top government officials such as the chancellor, vice-chancellor, and the foreign minister were not present during the voting. This could be assumed as a sign that the German government is not on the same page with the parliamentarians who supported the resolution.

Ultimately, Germany is an ally of Turkey in economic, political, cultural and military fields. More importantly, there are more that 3 million people of Turkish origin living in Germany. Therefore, relations, despite taking a serious blow, will endure. However, this resolution will be black mark in relations and will cause Turkey to review its dealings with Germany. After all, in the year 2016, in the face of court verdicts and continuous revelation of historical data negating the Armenian thesis, there is no excuse for the adoption of such a resolution.

At this juncture, the least and best reaction after this resolution by the German Federal Assembly would be take legal action against the resolution. In this context, the resolution must be taken to the highest German courts and if unsuccessful, to the ECHR. Hence, there lies a great duty on especially Turks in Germany and German citizens of Turkish origin.