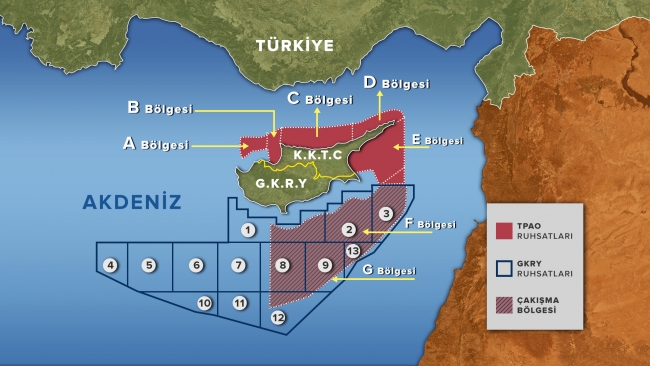 While the search for the oil and gas in the Eastern Mediterranean continues, Turkey's presence in the East Mediterranean basin seems to be bothering many actors in the region. This reaction leads to threats directed towards Turkey. The latest objection towards the presence of the Turkey in the region has come from the leader of Greek Cypriot Administration of Southern Cyprus (GCSC) Nicos Anastasiades.

GCSC leader Nicos Anastasiades has evaluated Turkey's presence in the Eastern Mediterranean as being "aggressive". Furthermore, he has suggested to the European Union (EU) that it should revoke Turkey’s candidate status.

Anastasiades has stated that Turkey's oil and natural gas exploration activities in the waters near the island of Cyprus has been defined as illegal by the EU and thus expressed that Turkey’s actions cannot be accepted. Going even further, he has argued that if Turkey as a candidate country for the EU will not fulfill its obligations, EU candidacy and eventual membership cannot be considered possible[1].

There is a fact that is being ignored at this point. Disregarding the existence of Turkey in the eastern Mediterranean will serve no constructive purpose. It would be a serious mistake to underestimate Turkey’s strategic importance in terms of energy routes. Even if the Turkish and Greek sides in Cyprus cannot agree on reconciliation, opposing to the strategic importance of Turkey's will be beneficial for no one[2]. Anastasiades has also stated that if the President of the Turkish Republic of Northern Cyprus (TRNC) Mustafa Akıncı is re-elected during the elections that will be held in October 2020, the negotiations for reunification may begin[3]. However, if the GCSC insists on its otherizing attitude towards Turkey, it will inevitably lead to the disruption of the Cyprus reunification talks.

Among those opposed to Turkey's activities in the eastern Mediterranean today is the Progressive Party of Working People (AKEL) General Secretary Andros Kyprianou, who had previously been stating that Turkey had strategic importance in every scenario. Today, however, Kyprianou states that all the justifications brought forth by Turkey about the Cyprus issue should be dismissed[4].

The EU should start realizing just how big of a mistake it was to disregard its values and principles to allow GCSC’s accession to the EU. Indeed, the drawbacks of allowing the accession of the GSSC to the EU without finding a solution to the Cyprus issue despite Turkey's objections were also raised by the European Parliament’s former Rapporteur on Turkey Kati Piri. This decision by the EU meant the abandonment of the intention to attain unanimity about Turkey’s full EU membership. Meanwhile, GCSC has become the key EU member to undermine the possibility of attaining unanimity. Turkey's objections against the EU membership of GCSC is not unfounded. Professor of International Law H. Mendelson Q.C. had emphasized that the accession of GCSC to the EU would be unlawful according to the 1960 Treaty of Guarantee. According to Article 1 of the Treaty of Guarantee;

“It [the Republic of Cyprus] undertakes not to participate, in whole or in part, in any political or economic union with any State whatsoever. It accordingly declares prohibited any activity likely to promote, directly or indirectly, either union with any other State or partition of the Island.”[5]

The proposal from GCSC for revoking Turkey’s candidate status can be interpreted as GCSC’s insolence in attempting to teach EU its own responsibilities. It is a matter of curiosity how the EU and its institutions are willing to accept such insolence from the GCSC despite GCSC having shown so much unconstructive behavior up until now.