On 18-19 October, the European Armenian Federation for Justice and Democracy organized the 4th European Armenian Convention (some Armenian news sources have erroneously referred to this event as “congress”).[1] Important names from the Armenian world  attended the Convention: Minister of Foreign Affairs of Armenia Edward Nalbandian, Minister of Diaspora of Armenia Hranush Hakobyan, Armenian Catholicos of Cilicia Aram I, and Bako Sahakyan - the leader of the internationally unrecognized “Artsakh/Nagorno-Karabakh Republic” in the occupied territories of Azerbaijan.

When the official website of the European Armenian Federation for Justice and Democracy is analyzed, it can be understood that this non-governmental organization operates for the purpose of presenting the 1915 events as genocide and to claim that there is an independent Armenian state on the occupied territories of Azerbaijan.[3] Indeed, topics geared towards this purpose were addressed during the Convention. Alongside topics such as the preservation of Armenian culture and identity and EU-Armenia relations, the recognition of the claims of Armenian genocide (by now proven to have no legal validity) and the right of self-determination of the entity presented as the “Nagorno-Karabakh Republic” (that violates all legal principles) was discussed.

Speaking on the first day of the Convention, Aram I stated[4] that no matter where Armenian live and whichever approach they prefer, all Armenians have one sacred goal, which is the “national demand.” According to Aram I, there is an independent Armenia that is “entitled to the fair rights of [Armenian] people,” and this right and authority was proven with the “Pan-Armenian Declaration On The 100th Anniversary Of The Armenian Genocide” (which implied territorial demands against Turkey) proclaimed by the President of Armenia Serzh Sargsyan. The “national demand” also has its basis in the protection and strengthening of the independence and sovereignty of the Karabakh Armenians. According to Aram I, the independence of the Karabakh Armenians is the historic right of the Armenian people.

It is apparent that Aram I completely disregards the rights of the Azerbaijanis who were expelled from their homeland during the Nagorno-Karabakh war and the territorial integrity of Azerbaijan (one wonders if such disregard for other people’s right is fitting of a religious functionary). With such words, Aram I has added Christian elements to the political ambition of establishing an independent Armenian state in the occupied territories of Azerbaijan, and has attempted to legitimize this political ambition by exploiting religion. Aram I’s statement and the list of participants in the Convention reveal that the Armenian diaspora, Armenia, and some leading Armenian religious functionaries have joined hands to mix religion with politics. This is done in order to carry out a campaign (based on an anti-Turkey and anti-Turkish mindset) involving accusations of genocide and to propagate propaganda for the independence of the Karabakh Armenians.

The mixing of religion with politics in such a manner is not a new development. In recent years, the use of religious elements such as Armenians’ Christian identity, “Christian brotherhood”, “sacredness”, and “martyrdom in the name of religion” have become commonplace in the politically motivated campaign for presenting the 1915 events as genocide. Such religious elements are attempted to be used in various occasions by officials of Armenia and Diaspora and Church members. Indeed, while Aram I was doing politics through religion on 18 October in Brussels, in the same day, the Armenian Catholicos of Etchmiadzin Karekin II, along with various religious functionaries, held an official meeting with the President of Germany Frank-Walter Steinmeier on the occasion of the 500th anniversary of the Protestant Reformation. During the meeting, Karekin II offered his gratitude to the German people and officials for the support they provided for the recognition and condemnation of the “Armenian Genocide.”[5]

Two days later in Cologne, in an event organized by the Diocese of the Armenian Apostolic Church in Germany on Armenian history and culture,[6] a map (the map has been shared at the end of this commentary) depicted Turkey’s eastern half, the island of Cyprus’ eastern half, Azerbaijan’s Nagorno-Karabakh region and its environs, the Republic of Georgia’s lower southern section, and the Islamic Republic of Iran’s northern tip as “Armenia”. Briefly stated, a giant piece of land has been presented on the present-day world political map as “Armenia”.

Meanwhile, an aspect that catches attention is that Archbishop Karekin Bekchian, who was appointed as the Trustee of the Armenian Patriarchate of Istanbul and who despite having stated that he had finalized his affairs regarding his previous post in Germany, has gone to Germany again during this period.

Coming back to the Convention in Brussels, despite everything, the organizers of 4th European Armenian Convention have failed to obtain any concrete results apart from making propaganda, as their efforts to promote "the Nagorno-Karabakh Republic" did not bear any fruit. In the second day of the Convention organized in the European Parliament building, the leader and the officials of “the Nagorno-Karabakh Republic” were not permitted to enter the building and join the event.[7] What should be appreciated and emphasized here is that, despite everything, the European Union respected Azerbaijan’s territorial integrity and the law, and did not allow provocations to be made over Nagorno-Karabakh. This led to the efforts of adding more recognition to “the Nagorno-Karabakh Republic” through a fait accompli method in the Brussels convention to backfire, and in this way, the core attempt of the convention became neutralized. 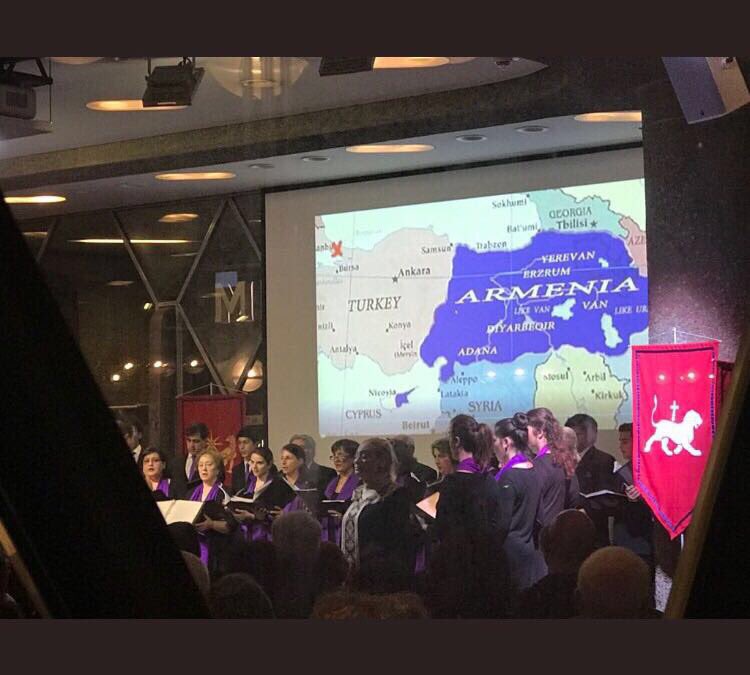