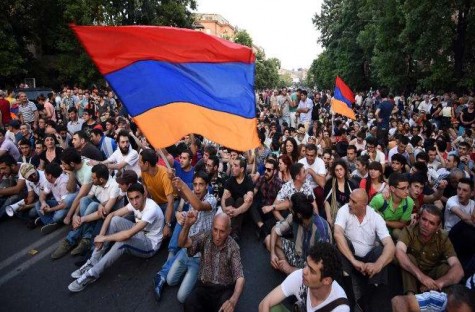 Protests in Armenia erupted on 17 June 2015 following the announcement of the raise in electricity prices. The police broke up the protests by force on 23 June. As a result, more people joined the protestors as the unnecessary police cruelty caused dissent. However, the heat of the protest movement gradually declined and eventually on 12 July 2015 leaders of the ElectricYerevan declared the termination of the protest to a handful of protestors that was left from the thousands.[1]

Since the beginning of the protests, protestors have underlined that theirs was a non-political movement and the only concern was the raise of the electricity price. They conveyed their discomfort with the poor management in the country in general, including the electric distribution company Electric Networks of Armenia under the slogan of "No To Plunder". The protestors repeatedly denied that anti-Russian slogans were shouted and expressed their concerns over Russian media’s representation of the protests as an ‘Armenian Maidan’.

The rise of the electricity price was a demand of the Electric Networks of Armenia, Armenia’s electricity distribution company, which is a subsidiary of Russia’s state-owned company Inter RAO. Notwithstanding protestors’ claim of the non-political nature of the ElectricYerevan however, different reports show that many Armenians believe that Armenia’s reassuring approach to the demands of the Russian state-owned company is another example of the Russian dominance over Armenia, which is viewed as a serious problem with respect to state sovereignty and independence. Accordingly, ElectricYerevan could be viewed as an implicit manifestation of the increasing dissent to Armenia's subservience to Russia.

Russian experts and political elite seem to be aware of the underlying political concerns and tensions. It is this awareness that lies behind Russian anxiety expressed with a propagandist rhetoric about the anticipated Western attempts to break the alliance between Russia and Armenia and claims of the ‘western provocations’ seeking an ‘Armenian Maidan’. For example, Russian senator, Igor Morozov clearly correlates the protests taking place in Armenia with the Ukrainian Maidan. According to Morozov “the US Embassy in Armenia is actively involved in the current events in Yerevan. Armenia is now close to a coup d'état with use of firearms”[2]. Pro-Moscow media Sputnik, on the other hand, underlines the coincidence between the time of Armenian protest concerning rise in electricity prices and the privatization of Armenia’s Vorotan Hydroelectric Cascade to American company Contour Global, as an example of the conspiracy oriented thinking of the Russian elite.

In 2013, Armenia abruptly decided to join the Russian-lead Custom Union while it was working on Association Agreement with the European Union. By 2015, Armenia became a member of the again Russian-led Eurasian Economic Union. This unexpected U-turn caused many questions and interpretations, yet almost everybody agrees that was another step of Armenia towards the Russian orbit.

Russian reaction to the protests reveal that Russia carrying on its aggressive ‘near abroad’ policy will not tolerate anything that would mean to question Russia’s hegemony over Armenia. However, political participation of the citizens through parliamentary and legal extra-parliamentary means and freedom of expression of political views including oppositional ones are indispensable rights in democratic countries.  From that, it can be seen that deepening Russian hegemony over Armenia will add to the problems in this country regarding consolidation of democracy.