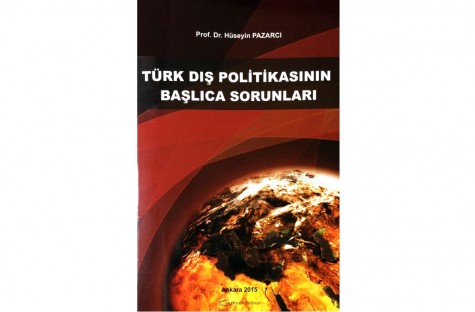 Türk Dış Politikasının Başlıca Sorunları (Major Issues of the Turkish Foreign Policy) written by Prof. Dr. Hüseyin Pazarcı was published in July 2015. Pazarcı states that he put forward an analysis within the framework of structural and international law, digressing from a political history study.

Prof. Dr. Pazarcı scrutinized seven main issues of the foreign policy of the Republic of Turkey in seven chapters. In his book, in which he approach within the perspective of international law, he also puts forth how these main issues will develop in the forthcoming period.

In the first chapter, Republic of Turkey’s sovereignty rights gained by the Treaty of Lausanne, the Turkish Straits and minority arrangements are elaborated based on the general position of the Republic of Turkey determined by the Treaty of Lausanne. The succession issues of the Republic of Turkey, which is considered as the successor of the Ottoman Empire, are also scrutinized in the first chapter. Turkey’s succession to the Ottoman Empire in areas such as treaties, government properties, debts and archives, and how this succession came about are discussed within the framework of international law.

In the second chapter, which is about the Armenian question which is one of Turkey’s current foreign policy issues, Armenians’ position within the Ottoman Empire and the process of disintegration of Armenians in the Empire is discussed. While the Treaties of Moscow and Kars signed in 1921 which determined Turkey’s borders in the Caucasus were approved by Azerbaijan and Georgia following their independence in 1991, Armenia’s suspicious approach to these Treaties poses a political problem for Turkey. Based on historical and legal date, it is a known fact that the number of Armenian losses who died during the Armenian resettlement does not match with the alleged numbers. Just it alleged numbers are proven wrong, it is also proven by documents of General Directorate of States Archives that 500.000 Turks and Kurds were killed during clashes between Armenians and Muslims living in the eastern parts of the Ottoman Empire.[1] Underlining the necessity to clearly reveal the aim of the Armenian resettlement based on historical data, Pazarcı emphasizes that the claim that the aim of the Armenian resettlement was the Turkification policy and was to wipe out Ottoman Armenian citizens needs to be proven. It is underlined that, in terms of legal data, the Armenian question cannot be described as genocide, it must contain the intent to destroy in order to describe it as genocide, and there is no document suggesting that there was such an intent.[2] Taking into account international law and criminal law, making necessary assessments and considering the fact that the Ottoman Government established courts in order to punish people who committed crimes during the Armenian resettlement, there is neither a crime against humanity nor a state that committed genocide.[3] Prof. Dr. Pazarcı states that even if there is such a crime committed by the Ottoman Empire, the Republic of Turkey could not be held responsible in any shape or form and it would benefit the Turkish policy to be prepared against such allegations.

Bilateral relations with Greece are addressed in the third chapter. The third part deals with four main issues. Analyzing border issues under the headings of Marine Space Issues and Air Space issues, Pazarcı also shed light upon the issues of Territorial Sovereignty and Minorities. Regarding the topic of continental shelf as part of the maritimes disputes with Greece, Pazarcı points out that the fact that Greece sees itself entitled to resolve this issue could create the risk of a crisis and underlines that this problem does not evolve in a positive manner.[4]

The fourth chapter in which the Cyprus issue is analyzed within the framework of international law, the search for a solution for the Cyprus are analyzed in terms of the EU membership of “Republic of Cyprus” and its influence on the resolution of the Cyprus issue, and Eastern Mediterranean maritime jurisdiction. Hüseyin Pazarcı considers the Cyprus issue as the most complicated issue among all Turkish foreign policy issues. Mentioning that the Cyprus issue harbors many problems such as the problem created by the EU countries who support Greek Cypriots,[5] he speaks of technical problems envisaging the security of Turkish Cypriots and the Turkish Republic of Northern Cyprus in terms of legal rights until a solution on Cyprus’ status is found.

Issues related to Iraq are analyzed in the fifth chapter under three heading. PKK and Turkey’s Security and Kurdish Nationalism and Kurdish Nationalist Movement, also Turkmen issue and Tigris-Euphrates Issue are examined within the context of PKK and Kurdish Nationalism. Another issue faced by Turkey in 2015 which is the relocation of the Tomb of Suleyman Shah to a location near the Turkish borders is also mentioned in this chapter. Pazarcı also underlines that Turkey should approach the issue of global terrorism in Syria as a foreign policy issue within legal framework. He stresses that the PKK existence in Northern Iraq and the Kurdish Nationalism in Iraq are key issues. Mentioning that the support to Kurdish nationalism by Israel is a known fact, he emphasizes that today, regional powers are active in a certain geography – Eurasia- and China is now included into the rivalry between USA and Russia.

Issues related to Syria are discussed in the sixth chapter. It is revealed how the Tigris-Euphrates-Orontes river disputes, internal conflict in Syria and issues related to Turkey must be interpreted in terms of international law. The Syrian policy stands out as out as another important foreign-related issue for the Republic of Turkey. The struggle to gain dominance over the rivers in the region also appears to be one of the international law subjects. The most important region with regards to rivers is being the scene of internal conflicts in the recent days. Pazarcı also shares with readers the scenarios Syria could face in internal politics. He generally underlines that the Turkish foreign policy must act warily in the Middle East.

In the seventh and final chapter, Prof. Dr. Pazarcı addresses the issue of Turkey’s EU membership. The historical development of the membership process, the identity problem emerged in the membership process, the problems with Greece and Greek Cypriot Administration, the democratization process in Turkey, the issues rule of law and respect for human rights are reminded. The issues related to the EU accession process within the framework of international law are also underlined. As a matter of fact, the previous six chapters shape EU’s approach to Turkey. Despite the religious and cultural differences, it is assumed that there will be no obstacles left for Turkey’s EU membership in case the requirements of the EU acquis are achieved. Considering Turkey’s positive features, it is emphasized that the EU must be persuaded.[6]