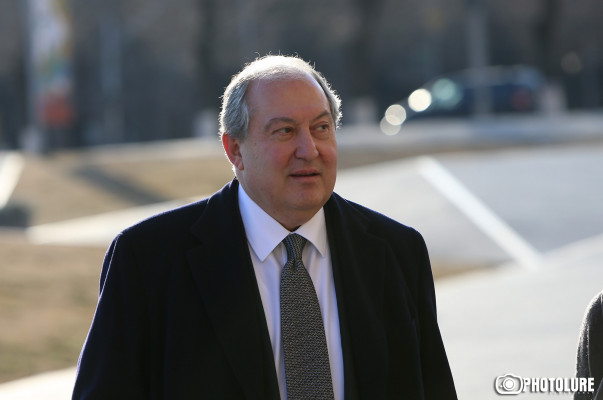 AVİM’s Note: Armen Sarkissian’s resignation from the presidency of Armenia on 22 January 2022 sparked heated debates in Armenia, and the causes and consequences of his move are being debated from different angles. It should be noted that Sarkissian’s resignation is an important development not just with respect to Armenian domestic politics, but arguably with respect to recent Armenia-Azerbaijan and Armenia-Turkey normalization efforts as well. Taking these into consideration, we would like to republish an AVİM Commentary dated 12 April 2018 that discusses the controversies that had erupted and the ethical questions that rose when Sarkissian was elected as the President of Armenia March 2018.

After the referendum held in December 2015 by which the Armenian system of government was transformed from semi-presidentialism to parliamentarism, on 2 March 2018, the Armenian parliament elected Armen Sarkissian as the fourth president of Armenia, after Levon Ter Petrostan (1991-1998), Robert Kocharyan (1998-2008), and Serzh Sargsyan (2008-2018).  By that, A. Sarkissian became the first president of Armenia, who was elected not by popular vote but by the parliament. On 9 April 2018, he took the oath of office and officially assumed the presidential post.

In the new parliamentarian system, the president will be devoid of executive powers. She/he will not possess veto power. As such, the President will only have symbolic significance, whereas the PM will be the top of the executive.

Though the presidency was reduced to a symbolic post in the parliamentarian Armenia, nomination of A. Sarkissian for this post by the ruling Republican Party of Armenia (RPA) and his eventual election triggered a controversy in Armenia This article, in the first place, will provide a brief overview of this controversy. As shall be shown below, the issue prompting contention over A. Sarkissian’s nomination was pertained to the alleged ambiguities regarding his citizenship and permanent residence.

Although the controversy has been ceased, A. Sarkissian’s previous career should still be an issue stirring up ethical questions and manifesting the political culture in Armenia, which, however, is not specific to this country, but a general problem of most of the post-Soviet states. Accordingly, the last part of this article will address these topics.

The Controversy Around Armen Sarkissian’s Nomination for the Presidency

At the core of the controversy that erupted out of A. Sarkissian’s nomination for the presidency lays the question of his eligibility to be designated for this post because of the “requirements for the President” set forth by Article 124.2 of the Armenian constitution, which states:

Those who questioned A. Sarkissian’s eligibility for the presidency claimed that he does not fulfil the constitutional requirements of Armenian citizenship and permanent residence in Armenia for the preceding six years.

On 8 February 2018, Hrant Galstyan from the hetq.am media outlet brought forward these questions to publicattention. He wrote: “…according to documents in the British Companies House registry on the Eurasia House International company, of which Sarkissian is listed as a director, his nationality is listed as British, and his Country of Residence, as the United Kingdom.”[2]

Reacting to this allegation, A. Sarkissian’s public relations officer stated that A. Sarkissian was a dual citizen of Armenia and the UK between 2002 and 2011, but he later renounced his British citizenship. Against this statement, H. Galstyan wrote that since 2005, in all the annual reports of Eurasia House International, the company established by A. Sarkissian, he was listed as a British citizen. Galstyan added that:

In the company’s 2014 Annual Return, the last published before the company was dissolved the following year, Sarkissian is listed as a British national and the country of his “usual residency” as the United Kingdom.

Thus, on both counts, just four years ago, Sarkissian, in the company’s reports, is listed solely as a citizen of Great Britain and its resident.[3]

A day later, A. Sarkissian told the reporters that he acquired the UK citizenship in 2002 and rejected it in 2011. He explained that he applied for the UK citizenship out of the necessity of visiting different countries for his business activities.[4]

On 1 March a debate erupted in the parliament. The leader of the oppositional Yelq bloc implied that that there was no “official document certifying when he renounced citizenship of the UK” and demanded such a document immediately.[5] Upon this request, documents about A. Sarkissian’s nationality were represented. However, the members of the Yelq bloc continued their dissent.[6]

In the end, opposition to A. Sarkissian’s candidacy did not hinder his eventual ascendency to the presidential post. However, as said above, A. Sarkissian’s previous carrier should still raise questions regarding ethics and political culture in Armenia.

Armen Sarkissian was a professor of physics at the Yerevan State University between 1976 and 1984. He continued his academic life at Cambridge University until 1991. Between 1991 and 1995, he was appointed as the Armenian Ambassador to the UK. In 1995-1996 he became the PM of the RA. After that, he turned back to his diplomatic career, which lasted until 1999.

A. Sarkissian began a new career as a businessperson by founding the Eurasia House International[7] in the UK in 2000. In his new business career that lasted until 2013, he worked as the advisor of international companies such as British Petroleum, Alcatel, Telefonica, Bank of America Merrill Lynch. In 2013, A. Sarkissian, once again, became the Armenian ambassador to the UK.[8]

Questions about Ethics and Political Culture

Although walking out of diplomacy to business world and then back to diplomacy again is not so unusual in the post-soviet world, such kind of career is both uncommon and suspicious in the Western world. A diplomat, who establishes personal and business ties with international companies while she/he is on active duty in a foreign country, then stepping in the business world, and eventually back to diplomacy would (and should) raise not only ethical concerns, but also questions related to state-security. The case of A. Sarkissian, alas, stands contradictory to this understanding.

From a pragmatist point of view, one may also ask why A. Sarkissian, but not someone else with a less controversial career, was nominated and elected as the president. Such a choice would be a wiser choice to obviate polemics erupting over the person of the president, hence to prevent the erosion of the prestige of the presidential office. Firm, institutionalized, functional, trusted, transparent political entities and offices are imperatives for functioning democracies. Accordingly, the election of A. Sarkissian as the President may have an indirect consequence of impairing democratization in Armenia.

Yet, the Armenian establishment seems to be not so much concerned with these matters. In fact, A. Sarkissian is not the first person to hold a top administrative position with a business career in foreign countries and/or to cause controversies that consume public trust to political entities and offices. For example, the former PM Karen Karapetyan who handed the office to A. Sarkissian on 9 April, after serving as Yerevan’s mayor in 2010-2011, moved to Moscow and became the first vice president of Russian state-owned Gazprombank, and then the deputy CEO of Russian state-owned gas company Gazprom's Mezhregiongaz unit.[9]

Examples could be multiplied. In August 2015 reports accusing the then PM and the head of the Armenia’s anti-corruption council Hovik Abrahamyan, who owned “private companies, gas stations, casinos and vast investment properties” while serving as the PM for misusing government were broadcasted. In fact, H. Abrahamyan’s business activities were a violation of the Armenian constitution which prohibits “government officials from signing business deals for personal enrichment while in office.”[10] In April 2016, the Panama Papers disclosed that the Major General of Justice Mihran Poghosyan owned offshore business ventures in Panama. There have been a multitude of similar cases, including, also, top army officers.[11]

Although, in the past years, several state officials were arrested on corruption charges, these arrests did not persuade the Armenian public about the existence of an effective fight against corruption. The fact that Armenia ranks 107 out of 180 countries in the Transparency International’s Corruption Perceptions Index 2017 reveals the low trust to public sector with respect to corruption manifesting the unpromising situation in Armenia, which, definitely erodes the stature of the political entities and offices in Armenia.

To conclude, A. Sarkissian’s ascendency to the presidential post reveals that Armenia is still on the path to accomplish its post-Soviet transition, particularly in ethical and political cultural domains. Actually, this problem causes deeper social problems such as apathy and indifference among the public evidenced by, for example, the low voter turn outs in parliamentary and presidential elections and referendums (60,56% in average between 1998 and 2017),[12] which, in turn, evolves into a larger problem of hindrance of democratization in the country.

[6] “Who Gave That Paper to Armen Sarkissian?”, Lragir.

[11] Ramani, “Why Anti-Corruption Protests Are Rising In Armenia.”