THE LATEST ISSUE OF THE ERMENİ ARAŞTIRMALARI JOURNAL IS OUT
Share : 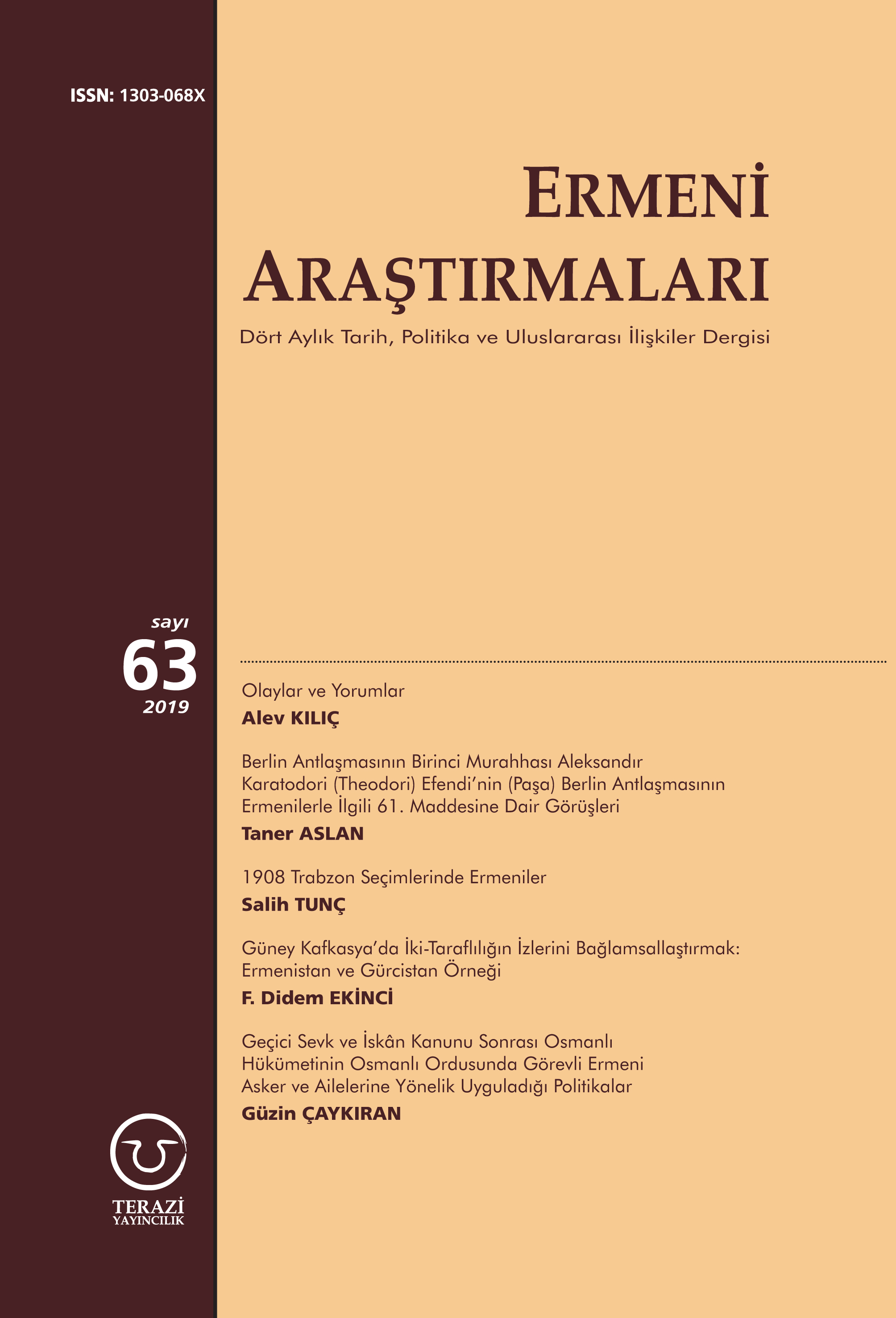 We are pleased to announce that the 63rd issue of the Ermeni Araştırmaları journal has been published. This issue consists of five articles in total, including an editorial and four research articles.

As always, the first article in the 63rd issue is the editorial titled “Olaylar ve Yorumlar” (Facts and Comments) by Alev Kılıç. It covers Turkey-Armenia relations as well as domestic and international developments concerning Armenia between April-August 2019. In this article, Kılıç focuses on the issues such as Prime Minister Nikol Pashinyan’s feud with previous administrations, the tensions between Pashinyan and the so-called administrators of Nagorno-Karabakh, and his efforts to get close with other international actors despite Armenia’s close ties Russia.

Salih Tunç’s article titled “1908 Trabzon Seçimlerinde Ermeniler” (Armenians in the 1908 Elections) is an archive research. Tunç, who based his study on the reports of French consul in Trabzon of that time, evaluates the impacts of the 1908 elections on the Armenian community in Trabzon.

In the fourth article titled “Güney Kafkasya’da İki-Taraflılığın İzlerini Bağlamsallaştırmak: Ermenistan ve Gürcistan Örneği” (Contextualizing the Traces of Bilateralism in the South Caucasus: The Case of Armenia and Georgia), Didem Ekinci focuses on the relations between Georgia and Armenia after 1992 in the context of the concept of bilateralism.

The last article titled “Geçici Sevk ve İskân Kanunu Sonrası Osmanlı Hükümetinin Osmanlı Ordusunda Görevli Ermeni Asker ve Ailelerine Yönelik Uyguladığı Politikalar” (The Ottoman Government’s Policies Over The Armenian Soldiers In The Ottoman Army And Their Families After The Temporary Relocation And Resettlement Law) by Güzin Çaykıran is another archive research in this issue. In this study, Çaykıran evaluates the policies of Ottoman Empire on Armenian soldiers and their families during the period of the 1915 Relocation and Resettlement Law.

For the web page of the Ermeni Araştırmaları journal, please visit: https://avim.org.tr/tr/Dergiler/Ermeni-Arastirmalari

Have a nice reading